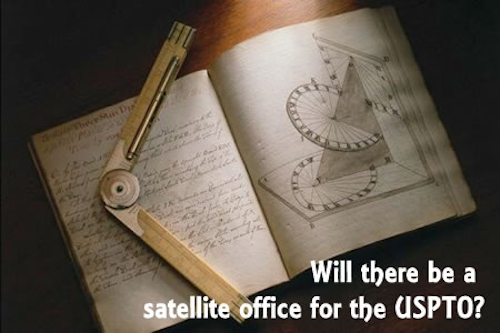 The USPTO is hiring. In fact they are doing a lot of hiring, over 1,200 new examiners every year, and they still can’t keep up with the deluge of new patent filings.

But while the number of patent filings has grown from 90,544 in 1967 to 484,955 in 2007, a 535% workload increase in 40 years plus an equally growing backlog of patent applications waiting for examiner attention, and no more room to expand in their current offices, the agency is now looking at a different approach to solving their growing pains.

First, some personal background in this matter. In 2004 I began researching the workload problems at the USPTO and wrote a paper about what I saw as an impending crisis, predicting that they would quickly run out of office space in DC, ending the article by asking the simple question, “Why not come to Colorado?” The article ended up being printed in a local magazine, but I largely viewed this as the end of the matter.

Later in a discussion with a member of the Governor’s staff, the topic came up, and he strongly encouraged me to pursue the matter, recommending I set up a task force.  Taking this as an official mandate, I pulled together a group of interested people, growing eventually to over 65 people.

In late 2005 a small group of us met with US Patent Commissioner John Doll, exploring the agency’s plans for the future.  At this meeting we were informed, by the interim CFO, that the USPTO had, in its 2008 planning budget, a line item for creating a satellite office. Nothing carved in stone to be sure, but a small clue as to how they were thinking. Not exactly headline-making news, but this small tidbit of information was enough to stoke the fire of possibilities, resulting in a series of meetings, leading to two Colorado visits by Commissioner Doll in 2006 and 2007.

That was then. Today a new reality is confronting not only the USPTO, but also other strategies for economic development in this era of virtual workforces.

In recent testimony by Deputy Under Secretary of Commerce for Intellectual Property and Deputy Director of the USPTO Margaret J.A. Peterlin to a House Committee, the agency revealed its new direction.

“The USPTO has demonstrated that telework is a business strategy that benefits our employees, our agency and the American economy. Our experience shows telework programs result in greater employee productivity, higher levels of sustained performance, reduced traffic congestion and air pollution, and reduced real estate costs,” Deputy Under Secretary Peterlin explained. “Our motivated, high-performing employees have shown they can perform their responsibilities regardless of physical location.”

Thinking about these numbers, 3,000 non-resident examiners represents a sizable virtual workforce. If they can live anywhere in the country they choose, there will likely be some obvious clustering that occurs.

So, how can we create a community in Colorado that will be very attractive to patent examiners?  If they can live anywhere, what things can be done to improve the odds that they will chose Colorado?

Invariably, as telework grows, economic development people will figure out ways to attract concentrations of certain types of workers because of the influence of a community.  People are social creatures by nature, and like to be surrounded by a community of their peers.

As an example, if there was an incentive offered, say a $20,000 down payment on a house for any examiners that moved to Colorado, that kind of preferential treatment would instantly shoot through the rumor mills at the USPTO and attract a lot of people. (This works out to $2M per 100 examiners). Hospitals routinely offer this kind of signing bonuses to doctors and nurses, the difference being that its direct employment as opposed to economic development.
Theoretically, once a critical mass developed, perhaps in the range of 200-300 examiners, other would follow because of the growing community.
Other options may include the building of a training center, social clubs, recreation opportunities, or special events.

The notion of growing physical communities out of virtual workforces is new. If people can take on a career position, and choose where ever they want to live, how will they make their decisions?

Economic development professional, who’s careers are based on the number of new jobs brought to an area, are just now waking up to the new options of working with virtual workforces.

A Patent Office in Colorado?

So will a USPTO facility ever come to Colorado?  The short answer is, we don’t know. But there is hope.

The current Patent Hoteling Program requires examiners to report to the DC office at least once a month, so many fly in at the end of one month, stay until the beginning of the next month before returning, thereby covering two months in one trip. Invariably these rules will change, but it’s safe to assume all of them will be making frequent trips back to DC.

A better option would be for the USPTO to find a more central location for reporting. This would be a location that not only allows for an easy commute to other areas of the country, but also space for training, meeting with inventors and their attorneys, and dealing with personnel issues.

In the midst of this shift to a virtual workforce, seasoned patent attorneys have raised a legitimate concern about their ability to meet one-on-one with the examiners. Having a central meeting ground would be a reasonable solution.

Will the USPTO set up shop in Colorado?  Word is that there are already examiners working from their homes in Colorado. However, if we can come up with a way to build a strong, viable USPTO Examiner community in Colorado, I think we should patent it.

NOTE: People can apply for the job of patent examiner at the Colorado Inventor Showcase on Nov 10th