The Opposite of War is Not Peace 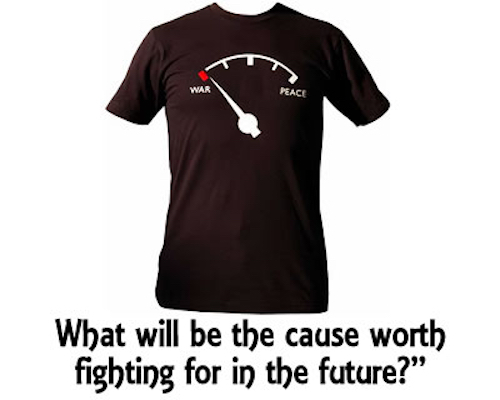 In 1976, President Gerald Ford issued an executive order forbidding the assassination of any foreign head of state. This order was issued when word leaked out that the CIA had made several attempts on Castro’s life as well as other “enemies” of the US.

This is a topic that I’ve often struggled with because today’s solution to global conflict is often measured in the destruction of the many as opposed to the destruction of the few. Not that I was in favor of assassinating Castro, but placing boundaries on the fighting of a war nearly always insures a larger, longer military engagement than simply removing a few problem people at the top.

The way I see it, the larger the death toll and the greater the path of destruction, the longer it will take to heal the deep-seated emotional wounds festering among the masses. While property damage can be repaired, and economies can be rebuilt, it is the emotional wounds that carry hatred and other significant problems from one generation to the next.

Peace-loving people are everywhere, working tirelessly to create a more peaceful world. However, peace is a very complicated topic. It is important to understand that when a war ends, it does not mean that peace instantly breaks out. The scars of war remain. The hostilities felt by people who lost family and friends may some day go away, but not instantly.

For some, it makes more sense to look at the opposite side of this equation. When peace ends, there are many potential states of “not peace”, and war is just one of the many options.

This may sound like nothing more than an exercise in semantics. Yet, over simplifying the relationship between war and peace can be more dangerous than war itself.

Government leaders who have been involved in the ending of a war understand the complexities involved in tying up loose ends. Done incorrectly, the likelihood of having to “start over and finish a war” at a later date increases dramatically. This is what happened in Germany at the end of WWI.

The Future of Power

Let me begin this section by asking a couple key questions. In the future, will corporate CEO’s have more power and control than leaders of individual countries? Will religious organizations, wielding their international clout, begin to usurp the authority of their host nations? Will groupings of countries such as the European Union, OPEC, and the UN supersede the power of their member states? Will non-governmental organizations such as the International Monetary Fund, the World Bank, and perhaps even ICANN rise in influence to a point where they can overrule individual countries? Will the economic ties of large professional organizations such as IEEE (Institute of Electrical and Electronics Engineers – 365,000 members), the ACM (Association for Computing Machinery – 80,000 members), or the ULI (Urban Land Institute – 39,000 members) transcend the authority of the countries where their members live?

In the past, the power of a country was determined largely by the size of its military and the control over the land and people within its geographical borders. As the world becomes increasingly mobile, crossing country borders grows increasingly less onerous, and communication systems enable instant connections between people in remote locations, the overall power and authority of the individual nation state begins to wane. Couple this with the fact that the level of complexity within many professions has grown beyond the point where governmental leaders can reasonably oversee the policies and legal framework within specific industries, and we have the stage set for some sort of a power shift.

It would be a gross oversimplification to assume governments will be willing to relinquish their authority anytime soon. Governments manage the systems, laws, and money supplies, and without a firm foundation for these, the other entities begin to falter.

Governments own the systems and they have within their authority the right to enforce the systems either with police, military, or armed forces. Imposing the rule of law also means that governments have the ultimate veto power over an organization that oversteps its bounds.

But beyond the confrontational nature of enforcement, one of the primary duties of government is to resolve conflict. Without stable systems and authority for resolving disputes, the disputes grow into conflicts and conflicts grow into bigger conflicts, even war.

Our past systems for resolving conflict, however, are becoming painfully inadequate in a world where systems are growing more global, transcending the borders of individual countries, and conflicts arise between people in dissimilar jurisdictions. With these factors in place, a new kind of power broker to emerge.

The Future of War

“Join the nano-military. The weapons are tiny, but the wars are intense,
and the stakes are higher than on any other battlefield”

Traditionally, militaries have been used primarily to resolve geographic disputes – people from one geographical region fighting against people from another geographical region. With additional levels of complexity stemming from advancements in technology and new entities vying for control, the nature of disputes and the kinds of problems that arise will soon make traditional militaries a thing of the past.

Before you jump to the conclusion that peace will suddenly start to explode all over the world, militaries will simply transition from traditional to increasingly less traditional, in many ways unrecognizable by today’s standards. Advanced technologies mandate unusual forms of policing, and a completely new breed of military.

As society evolves, the types of weapons people reach for will change. For many, the idea of shooting a gun seems barbaric, but human nature demands tools for exerting power and control. For “civil” people, the weapon of choice may be industry sanctions, competing standards, a new law, or the creation of a new oversight authority. But for others, the weapon of choice may be a cyber attack, robots, Anthrax, disease, biologic poisonings, nano-weaponry, even attempts to wield control over the weather.

Military school graduates will find themselves highly unprepared for the enemies of the future.

Technology will, on one hand, seriously expands the range of business opportunities. But as we expand the range of technologies, we create more breaking points, and devious people will find devious ways to use these technologies against each other.

With this, the idea of war in the traditional sense gives way to war in a variety of non-traditional forms such as cyber wars, intellectual property wars, weather wars, water wars, and language wars.

The Opposite of War

As technology escalates, new destructive forms of power-wielding tools will emerge. The power of an entire army may be concentrated into a tiny form and placed in the hands of an individual, rather than an entire country. Wars between individuals may become more dangerous and destructive than anything we know today.

With the characteristics of war taking on such a radically different flavor in the future, the opposite of war may be an anti-war, or a reverse polarity war, or some sort of peace infuser.

Will wars ever go away? I don’t think so. They may not look like the wars of today, but they will still exist. If we ever manage to somehow “cure” wars, we will likely all become lazy and complacent, and that in itself will lead to our next war.

But while I don’t think wars will ever go away completely, it is within our power to minimize them, and have fewer, less destructive wars, that end quickly.

My goal in writing this is not to end with some universal truth that will help all of mankind. Rather, my goal has been to expand your thinking and give you a slightly different perspective on one of mankind’s greatest inadequacies.