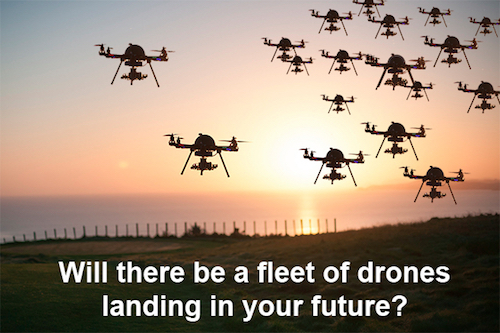 I was recently honored to be a guest speaker at a conference hosted by Mark Wilkins, Kevin Kelly, and the good people at Stampede on the “future of the drone industry” in Buffalo, NY.

While most businesses are taking a wait and see attitude with flying drones, Stampede has not only embraced them, but is formulating much of their future audio-visual business strategy around using drones to scale their operation exponentially.

My role was to expand the audience’s thinking and hopefully add a few new dimensions to their planning process.

Having written several columns in the past about the emerging drone industry, including “192 Future uses for Flying Drones,” I’ve become enamored with the seemingly limitless potential for innovation in this “hyper-mobile drone-robot space.”

When it comes to drones, we shouldn’t limit our thinking to their flying capabilities. Instead, the same drone that can fly may also be able to roll along the ground, jump onto a building, climb a tree, adhere to a piece of glass, float on the water or swim under it.

While most have confined their thinking to drones with photo and video capability, they can include everything from sensors, to robotic arms, video projectors, speakers, lights, x-rays, weapons, bombs, and several dozen spy technologies only the NSA knows how to use.

One of my recent grand epiphanies had to do with how Moore’s Law, the exponential doubling of capacity every 2 years, would affect drones.

With typical electro-mechanical advancements in the physical world, there is perhaps a 2X-4X improvement every decade. But once an industry transitions into the digital space, where Moore’s Law shifts industries into the exponential growth fast lane, smart technology can slingshot its way up the improvements ladder far faster:

If we apply this to transportation, as the connected electric car becomes far more digital, over the next decade they have the potential of improving by a factor of 32 while traditional mechanical cars may only double or quadruple.

As our physical houses enter the digital arena of smart homes, they too have the potential of improving by a factor of 32 while conventional homes gauge their improvements on a low single digit scale.

This also applies to our cities. Normal cities change at a snails pace, while a smart city could potentially ratchet forward 32-fold over the same period.

Yes this line of thinking grossly oversimplifies the complex systems, processes, and methodologies shifting in the background, but its safe to say old rules no longer apply.

The Difference Between Swarms and Fleets

A swarm of drones, that operates like a swarm of bees, flock of birds, or school of fish, will coordinate their activities around a central purpose or mission.

As example, a single lighted drone floating in the sky can act as a pixel in space, but with a swarm drones acting in unison, the lighted sky takes on the characteristics of a giant three dimensional display, with “flying pixels” changing color and switching on and off as the nature and pattern of the scene requires.

Similarly, a security swarm oriented around a single purpose may be used to capture images over complex environments like a wooded forest, smoky burning neighborhood, or dense crowds.

Fleets, on the other hand, which may incorporate a swarm or two in their operation, will have the capacity of handling several assignments at once. A swarm will generally operate as a subset of a fleet.

While part of a fleet may be monitoring a construction project, another may be tracking livestock, and another delivering packages to customers.

This kind of distinction may come across as premature for a fledgling industry where swarms and fleets do not yet exist, but it’s helpful in understanding how exponential growth will soon make drones one of the most pervasive industries on the planet.

Thinking through the Potential for Drone Fleet Businesses

It won’t take long for people managing complex operations to realize that if one drone is effective, a dozen or two can produce far better coverage.

Managing a fleet of commercial drones will be far different than working with today’s one-off hobbyist quadcopters. Fleets will only come into play once automated systems enable less-skilled operators to manage their own equipment.

Fleet operators will find themselves needing a command center with skilled personnel such as pilots, logisticians, and data analyzers, but the drones themselves will be automated to the point on needing little supervision.

Going beyond traditional power-distance-capacity characteristics, fleets of drones will have a way of drawing attention to owners and operator. Much like the kid with a new toy, early fleets owners will be granted unusual status in society and will always have interesting stories to tell, This alone will get them invited to most A-list parties.

We should never underestimate the desire for “cool factor status” as we try to separate ourselves from the rest of the crowd. 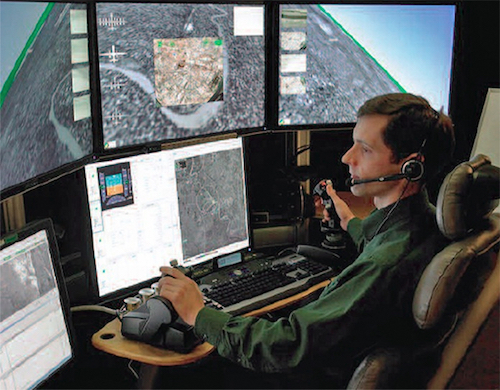 The following are a few examples of where fleets will begin showing up in our local communities: 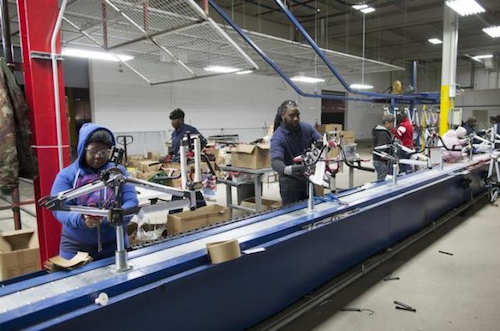 The flying drone industry is about to explode. They will affect our lives in countless ways we cannot yet imagine.

Reaching a billion drones in the world may not seem all that significant, but it truly is.

Having tens of thousands of drones swarming over most metro areas on a daily basis may seem annoying at first, but the combination of new businesses, jobs, information, data analysis, new career paths, and revenue streams will quickly turn most naysayers into strong industry advocates.

That said, there will be many problems to overcome during the next few years. Noise, pollution, mid-air crashes, peeping drone issues, terrorist activities, smugglers and more will cause many to question their value.

But this is a highly transformative industry, solving problems nearly as quickly as they’re created, giving us capabilities we never knew we’d ever want.

Personally I can’t wait for this amazing new world to come to fruition.