Should We Revive Extinct Species? 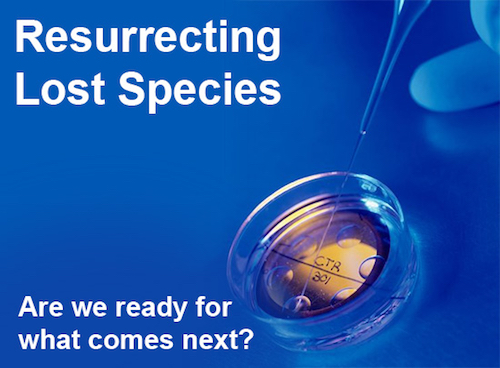 Like many others, I’m a fan of TED Talks and a Feb 2013 talk by Stuart Brand titled “The dawn of de-extinction. Are you ready?” has caught much of the world off guard.

For those of you who aren’t familiar with this topic, biotech is currently accelerating four times faster than digital technology, and the revival of extinct species is not only becoming possible, but is imminent. Stewart Brand plans to bring many extinct species back and restore them to the wild with his Revive and Restore Foundation.

Brand is well aware of the moral and ethical controversies surrounding this topic – the can-we-should-we debate – but the issues go far beyond the ethics of de-extinction. What he is proposing is an “unleashing” of human reengineered species that only closely approximate those who have become extinct.

So how long will it be before we see a revived version of the passenger pigeon (extinct in 1914), the Tasmanian tiger (extinct in 1936), and the woolly mammoth (extinct over 3,000 years ago) roaming the earth again?

It will probably come as a surprise to most to learn that the first revival of an extinct species has already occurred. It happened in 2003 when scientists cloned a bucardo, an Iberian wild goat, that had gone extinct three years earlier, by inserting its DNA (which they got from frozen bucardo skin) into the eggs of an existing goat. The cloned bucardo was born, but then died just ten minutes later.

To put this into perspective, the Wright Brother’s first flight only lasted 12 seconds.

Perhaps the most controversial comment made by Brand during his talk was, “the results won’t be perfect but nature isn’t perfect, either.”

So we will only be creating close proximities to existing species, effectively new forms of life. Here are a few thoughts on what comes next.

Stuart Brand – “The dawn of de-extinction. Are you ready?”

Should cloning be used for de-extinction?

In its earliest form, de-extinction will involve cloning DNA, which means it will raise a number of ethical questions, like “Should we be playing God?”

According to Brand’s Revive and Restore Foundation, there are four primary reasons for reviving extinct species:

To be sure, humans have played a role in the extinction of many species, but not all of them. With some, humans had very little to do with their disappearance.

So should we only focus on species where human played a role in their extinction? The unanswered questions go far beyond that.

As an example, if California condors go extinct, it’s unclear if they could ever be brought back fully, because young condors rely on their parents for training.

Will a revived species learn to adapt to its new environment? Will they be able to reproduce in sufficient number to ever be fully viable? Will the genetic differences be too great for them to survive, or will those differences make them ultra-adaptable where they will thrive to the point of becoming a pest to their surroundings.

Around the same time as the attempted revival of the bucardo in 2003, Robert Lanza, Chief Scientific Officer at Advanced Cell Technology, took tissue from a Javan banteng (not yet extinct), and inserted it into an egg cell of a closely related cow. The cow gave birth to the exotic banteng, which is still alive and thriving. 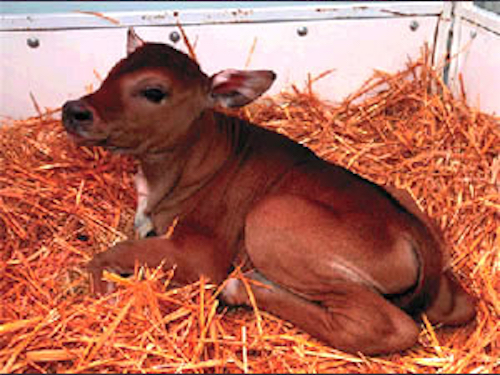 Currently there are three semi-successful techniques being experimented with for de-extinction.

1.) Selective back-breeding of existing descendants to recreate a primordial ancestor is being used for the revival of the European Aurochs, among others.

2.) Cloning with cells from cryopreserved tissue of a recently extinct animal can generate viable eggs. If the eggs are implanted in a closely related surrogate mother, some pregnancies produce living offspring of the extinct species.

3.) Allele replacement for precision crossbreeding of a living species with an extinct species is a new genome-editing technique developed by Harvard geneticist, George Church. If the technique proves successful (such as with the passenger pigeon), it might be applied to the many other extinct species that have left their “ancient DNA” in museum specimens and fossils that are thousands of years old.

Over the coming years many new techniques will undoubtedly come to life making it one of the hottest new areas of science.

Resurrecting lost plants and animals are one thing, but when it comes to tampering with humans the stakes get much higher.

Here are a few examples of of the ethical dilemas we will be facing:

Are there moral and ethical boundaries that we should not cross? How will we know when we’ve gone too far?

Very often what starts as a cause, to right the wrongs of the world, will get hijacked by businesses wanting to profit for the new technology. Moral and ethical edges of science are often vastly different than the lines businesses are willing to cross.

Genetic research like this is very expensive, and this recent awareness campaign will undoubtedly draw in millions.

However, the same people funding today’s research are often the same people wanting to recoup their investments, and the lens through which they are viewing the work is vastly different than the lens of scientists doing the research.

Certainly the moral divide, created by the chasm between knowledge-seekers and profit-seekers, varies on a case-by-case basis. It can range from non-existent to something very wide. But without good systems for governing research and outcomes, it may be wise to focus on the lack the checks and balances needed to prevent large-scale disasters.

The 1993 movie Jurassic Park did a great job of sensitizing the world to the idea that de-extinction may indeed be possible. As a result, many scientists decided to make it their mission in life.

While we will see some early successes over the next ten years, we will also see many setbacks. As Brand puts it, “De-extinction is not a ‘quick fix’ science. Most species revival projects will take many decades.”

At the same time, the sum total of all human knowledge is massively dwarfed by what we don’t know, and very often our attempts to control the world around us goes very wrong.

A good example of this was given by Allan Savory, an ecosystem scientist working in Africa when he recommended the slaughter of 40,000 elephants to help prevent desertification, only later to realize that elephant grazing itself was highly beneficial to thwart the encroachment of the desert.

Brand ended his talk with, “Humans made a huge hole in nature, and we have a moral obligation to repair the damage.”

Will the world be a better place if we bring some of our extinct animals back? Are the close proximities of animals that Brand describes close enough, or is this a dangerous area to be playing in? I’d love to hear your thoughts?

UPDATE:  On March 15, 2013, researchers announced that they’ve grown early-stage embryos of the gastric-brooding frog, a species that has been extinct since 1983. This is the first time, scientists have grown the embryos of an extinct species. Details in the Sydney Morning Herald.

Should We Revive Extinct Species?