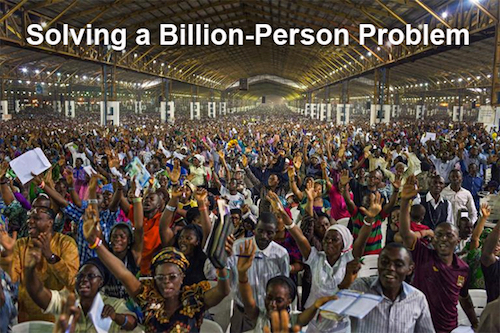 My friend, Peter Diamandis, likes to say, “The best way to become a billionaire is to solve a billion-person problem.”

When I first heard this phrase, I had difficulty imagining what a billion-person problem looked like.

A problem that affects a billion unique individuals is far different than one affecting a single person one billion times. Hmmm, one person loaded down with a billion problems? Sounds like most Mondays to me.

Putting that image aside, it’s hard to imagine getting rich from solving the plight of even a few massively problem-plagued individuals, but perhaps solving repeated problems happening to larger groups is not so farfetched.

Finding commonalities that create a billion-person community is also an interesting approach. As an example, somewhere between 10-15 percent of the world’s population is left-handed, upwards of a billion people. A recent study showed that left-handed people generally earn less money, so solving this obvious status impropriety may be a worthy cause.

It also occurred to me that solving a problem with a billion “occurrences” may work. What things happen over a billion times a year? This will include routine things like finding food to eat, water to drink, sleeping, talking to a friend, staying warm, staying cool, getting dressed, staying safe, and much more.

Framing the topic around time, such as saving a billion hours or minutes, may also work. To put this into perspective, a billion minutes equals 694,444 days or 1,902 years.

It was at this point that ideas began to take shape. Eliminating a billion starving moments, a billion moments of frustration, or a billion minutes of confusion started to make sense.

As we transition from national systems to global systems, will it be possible to create an additional billion units of fairness, compassion, empathy, freedom, or opportunity?

After thinking about this last question, it dawned on me how massively important every tiny system change will be when it happens on a global level. Here’s why this topic will play such a significant role in our global future.

Our systems determine our behavior and bad systems tend to drain the enthusiasm, capabilities, and the very lifeblood from our best and brightest. Here are a few obvious examples of our billion-person problems:

1.) Borders – Crossing borders is still a hassle, except for Europe where the EU has decided much of it was unnecessary.

Between 2004 – 2007 the European Union (EU) added 10 poorer, ex-communist countries to its ranks. Since EU citizens have the right to move freely from one country to the next, the 100 million people living in Central and Eastern Europe states could have easily migrated to the richer countries.

Since average incomes in Sweden were more than eight times higher than those in Romania, it would have been easy to anticipate many making a permanent move. Yet only about four million Eastern Europeans have migrated since 2004, while many come and go.

Rigid border crossing create friction and isolation, while open doors tend to be revolving ones.

Before the 1950s, crossing the U.S.-Mexico border was easy. Many Mexicans crossed to do seasonal work, but few settled. Most people preferred not to uproot their families.

Today’s regimented scrutiny for anyone crossing borders has created an either-or situation, forcing those in dire straits to simply go underground. As a result, the practice of circumventing traditional border controls has become well defined and human trafficking, a huge business.

2.) Roaming Charges – Anyone who accidentally switched on their data-roaming while in a foreign country knows the kind of expensive telecom landmines they’ve just unleashed.

While the European Commission planned to blaze a new trail and scrap the fees by the end of 2015, the effort was vetoed by EU countries themselves with a decision to leave mobile roaming charges in place until the end of 2018.

Even though there are tons of workarounds, using services like Skype, Tox, Slack, and Viber, there remains a billion-person opportunity inside this problem.

3.) Privacy – Two years have now passed since Edward Snowden broke ranks with the NSA’s spy culture, showing the world what kind of holes we have in our so-call private lives.

At the same time, the number of bad actors intent on taking down entire countries is climbing and surveillance technologies are a hugely important tool for tracking down those with evil intent.

More security means less privacy, and more convenience means less security. Much like playing a constant rock-paper-scissors game, we are still a long ways from solving the privacy-security-convenience game.

So where does that leave our privacy? If you have a solution for the privacy dilemma, you will be solving one of life’s great billion-person problems.

4.) Pollution – Anyone walking around big cities in China knows how important it is to have windy days. But wind is a poor solution to a pollution problem that could have been eliminated at the source.

However factory pollution is only a small piece of a much larger puzzle. There are now over 100,000 ships on the world’s oceans and the largest ones will emit as much as 5,000 tons of sulfur in a single year, roughly the equivalent of 50 million cars. This is far more than a billion-person problem, it’s an every-person problem.

5.) Access to Clean Water – Of all the water on planet earth, only 2% is actually fresh water. And because of all the difficulties accessing fresh water, only about 25% is accessible at any given time. This means the entire human race survives on 0.05% of all of the world’s water. Somewhere in the middle of all this unusable water is a billion-person opportunity.

6.) Person-to-Person Payments – Similar to handing someone a $20 bill, only in digital form, peer-to-peer payment systems are already beginning to spring to life. According to Forrester Research, this market will be worth about $4 billion by 2017 and grow exponentially from there.

7.) Paying Taxes – As a general statement, our existing tax systems are far too complicated and the time it takes to prepare and file taxes is a complex form of labor that virtually no one recoups.

8.) Access to Healthcare – According to the World Health Organization, 57 countries face a severe health-care workforce crisis. The shortage of health-care workers represents a major roadblock toward achieving the Millennium Development Goals blueprint, agreed by all countries and leading developmental institutions, to meet the needs of the world’s poorest people by 2015.

According to a recent World Health Organization report, about 2.36 million health-care workers and 1.9 million managerial and support positions are needed worldwide. But that’s only part of the deficiency. They estimate that nearly 1 billion people worldwide have almost no access to essential health services due to a global shortage of 7.2 million healthcare workers.

10.) Gender Equality – The United States ranks 65th in wage equality for similar work, according to a World Economic Forum study of 142 countries. In 2013, women who worked full-time, year-round in the United States were paid 78 cents for every dollar earned on average by men, according to the U.S. Census Bureau. That gap, though, is worse for women of color: Black women make 64 cents and Latinas make 56 cents for every dollar earned by a white man.

We still have a long ways to go to achieve anything close to gender equality in the world, and with over half of the global population being female, this is far more than a billion-person problem.

11.) Access to Capital – Capital has been migrating from rich countries to developing nations over the past several decades, but the movement of funds from the U.S. dollar, euro and yen markets to the capital-scarce emerging economies around the world has not kept pace.

Central to this issue is the lack of a “trust architecture,” workforce talent, and regulatory consistency. As example, a country without credit bureaus, accounting standards, and stock exchanges lacks the basic infrastructure to build an entrepreneurial culture with the financial backing to compete in the global marketplace.

12.) Technology Access – In the developed world technology has transformed our lives, allowing us to access information at any time from an ever-growing number of devices. Tasks once performed by grueling effort have been reduced to a single click or tap.

The good news is that information technology itself may be a major part of the solution. With the decreasing costs of smartphones and tablets in the developing world we are seeing entire new populations accessing the Internet.

13.) Educational Access – Studies have shown we now face a global teacher shortage of over 18 million worldwide with over 23% of today’s young people attending no school at all.

In addition, a recent McKinsey Global Institute study shows the global labor force will be approaching 3.5 billion in 2030, of which 60% will need to be retrained or have additional skills added to their daily routine by 2025.

Technology may provide some of the answers, but we will still be facing a billion-person education opportunity over the coming years.

14.) Sleep – Researchers at the Warwick Medical School have found that 16.6% of the world’s population reporting insomnia and other severe sleep disturbances. Similar studies in Canada and the U.S. have found rates as high as 20%.

Many who work on sleep research now view it as an emerging global epidemic with well over a billion people feeling the ongoing torture of sleepless nights.

The 14 problems listed above, and their countless derivative sub-issues, are intended to help spark your imagination. As a rough guess, I would estimate well over a thousand of these billion-person problems in existence today, with many of them centered around wasting time.

I often think about the billion moment-sucking black holes that have been incorporated into our global system architecture.

Every time I delete spam from my inbox, I feel a tiny piece of my life flitter away.

Sitting needlessly at stoplights, or watching the minutes tick away as I wait in some line, or being forced to fill out yet another form, our precious time is being coopted by everyone from inconsiderate businesses, to overbearing government, to painful security checks at the airport.

This is what I call “time pollution.”

Like a leaky sieve carrying our daily time supply, however much we start with is never even close to what we end up with. And while most of us enter life feeling like we have squanderable amounts of time to work with, as we get older, our rapidly dwindling years reveal a much different story.