The Day of the Drone is Upon Us 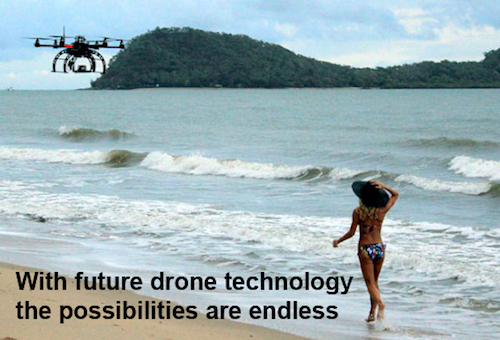 Sometime over the coming months you can expect to see a version of the following help wanted ad:

In 2010 the U.S. Military spent $4.5 billion on drones. This has been a rapidly growing budget item in the military’s arsenal with $4.8 billion requested for 2011.

With this kind of focused spending, drone technology has improved dramatically over the past decade, but as a technology, the future for drones will go far beyond military uses. The stage is being set for thousands of everyday uses in business and industry all over the world.

A few months ago I speculated on how flying delivery drones could be added to the FedEX and UPS fleets. As it turns out, we are now moving well past the speculation stage. (pics) 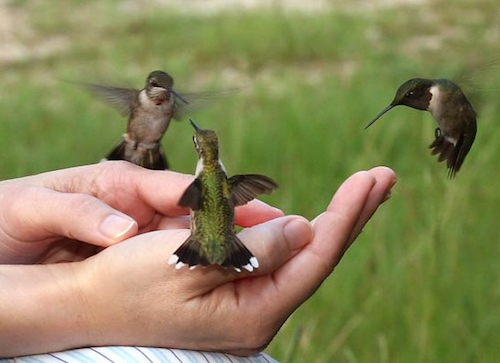 Google recently purchased a small fleet of micro-drones to help with their mapping projects.

At the 2011 Consumer Electronics Show in Las Vegas, Parrot unveiled a series of games that could be played with their iPhone-controlled AR Drones sold in all Brookstone stores.

In preparation for London’s 2012 Olympics, the UK is making plans to have a fleet of flying drones in place to monitor the crowds. But they are considering taking it one step further by equipping some of the drones with non-lethal weapons in case violence breaks out.

With military and police forces being the primary customers of drone technology so far, it’s only natural that most of the industry’s thinking has been skewed towards surveillance and weaponized drones.

However, flying drones are an incredibly flexible platform for new technology to emerge. Simply adding elements like cameras, lights, audio, sensors, or even a robotic arm can increase the utility of a drone exponentially. Here are a few unusual possibilities to help tweak your imagination:

Cruise Ship Drones: While the rest of the world has shifted from place-to-place to person-to-person communications, the cruise industry remains woefully behind. Cell phones and other handheld devices are not usable on ships without paying exorbitant connection fees. This can be solved with flying communication drones hovering above each ship. Since the airspace at sea is unregulated, this can be implemented with or without the okay of the cruise ship below. Doing some quick math, if 1,000 people were willing to pay $10 a day to stay connected, the income streams will be huge. 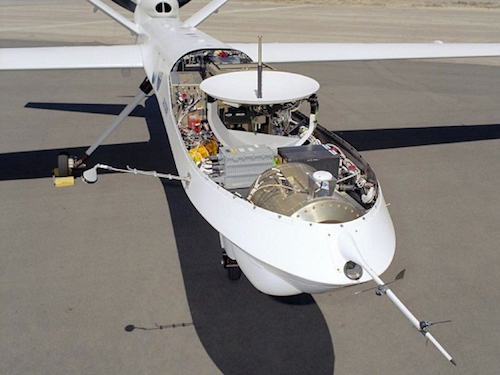 Communication Drones: Operating like communication satellites in space, flying communication drones will be a quick way to eliminate the shadows and dead spots common with today’s tower-based cellular networks. The only things preventing more experimentation in this area has been legacy systems and the existing spectrum allocations that favor telecom incumbents such as AT&T and Verizon.

In a recent conversation I had with an executive in the aerospace industry, I was told that the entire U.S. could be blanketed with high speed wireless connectivity with a formation of 19 well-positioned communication drones hovering overhead.

Surveillance Drones: Criminals fleeing the scene of a crime will have an entirely new set of police tracking devices to contend with when drones are brought into the mix. This may also be extended to border-crossing drones, prison-watching drones, and open-sea pirate and smuggler drones. Add a set of speakers to the drone and an operator can start yelling at anyone engaged in vandalism, graffiti or littering.

Video Projector Drones: Once a video projector is added to a flying drone, you suddenly have a marketer’s dream tool with the ability to project images on the sides of buildings, on sidewalks, or even on the side of a moving vehicle.

Lighting Drones: We’ve been trapped into thinking that lighting can only be managed from stationary positions, but that is about to change. Concerts and stage shows with flying spotlights or pyro-burst effects, TV sets, political speeches, and opening night galas can all be enhanced when our lights start flying.

Strobe Drones: High-intensity strobes can cause dizziness, disorientation and loss of balance making it virtually impossible to run away. As a weapon to disrupt or disable crowds, this kind of technology added to a drone is just now becoming practical.

Flying strobe lighting on a movie set will open a different set of options and floating concert strobes can create stage shows effects never before possible.

Audio Drones: Drones outfitted with speakers are already being experimented with. Long Range Acoustic Devices (LRAD) are being used as loud hailers to emit warning signals, or when the volume is turned up, as weapons to deafen opposition forces with a jarring, discordant noise. Some ships now carry LRAD technology as an anti-pirate measure. As an example, LRADs were used to drive off pirates attacking the Seabourn Spirit near Somalia in 2005.

Audio drones, however, have far more potential in the marketing and entertainment fields. Floating and flying sounds create a far different sensation than stationary speakers. Floating messages over nearby crowds may be the solution to draw attention to a mobile business, a time sensitive special such as hot bread just pulled from the over, or situational conditions such as announcing the sale of umbrellas during the start of a rainstorm.

Advertising Drones: Planes towing advertising banners are a long-standing tradition for outdoor stadium events and wherever large crowds gather. But scaled smaller in size, with more maneuverability, drones towing banners or equipped with side displays for advertising are distinct possibilities.

Photography Drones: The fine art of photography takes a new twist when flying camera drones become affordable. Photographers have long dreamed of being able to find the perfect angle for every shot, regardless of elevation or precariousness of the vantage point. Going beyond the military’s need to spy on people, photography drones are headed for more mainstream uses such as photojournalism, catalog photos, real estate photos, scientific research, slow-motion sequences, and hobbyist experiments.

Gamer Drones: In January, Parrot introduced a number of games that could be played on their AR Drone quadricopters using an iPhone as the controller. This layout and design is setting the stage for many more smartphone-controlled drones with app developers providing a never-ending stream of new games.

For parents worried about their kids spending too much time playing games in their basement, the new concern will be about kids getting lost in the forest playing “drone wars.”

Delivery Drones: Thinking beyond traditional delivery systems, flying drones could be used to deliver food, packages, water, change out the batteries in your home, remove trash and sewage, and even vacuum the leaves from your front lawn. For some people, the drones will allow them to live off the grid, and even off the net.

Robotic Arm Drones: Add a robotic arm to a flying drone and a person’s mind begins to swirl with possibilities. A “flying arm” can be used as a probe in hazardous environments, a transport for dangerous chemicals, or a rescue mechanism for someone dangling off the side of a mountain.

Sensory Drones: Many of today’s drones have the ability to monitor air quality and map pollution flows. Future drones will have the ability to chart a wide variety sensor-based data such as soil quality; moisture content; micro-temperature variations of air, land, and sea; air densities; particulate matter; and chart the spread of plant diseases and micro-organism infestations.

Fireworks Dropping Drones: When fireworks are manufactured, a large portion of the overall weight is dedicated to the propellant needed to launch the pyro-display into the sky. The propellant is also one of the least stable and least controllable components of the assembly. Fireworks designed specifically to be “dropped from the sky” would have far more stable characteristics, and produce spectacular visuals for a fraction of the cost.

Search and Rescue Drones: Very often weather and visibility issues prevent a manned-rescue team from venturing into turbulent waters to attempt a rescue. For this reason a number of unmanned rescue drones are being planned and tested to overcome our own “human” limitations. 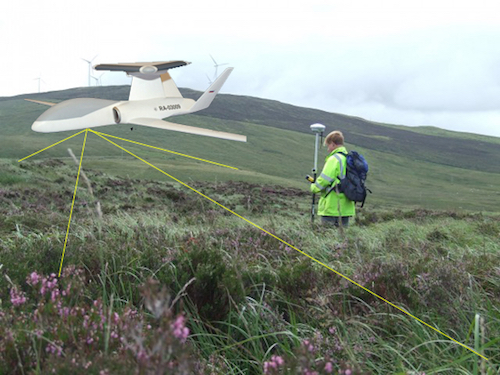 Surveying Drones: The process of surveying land and documenting the terrain can be greatly speeded up with the introduction of flying drones designed specifically for taking all of the measurements. Laser measurement systems coupled with topography mapping systems are a natural extension of current drone tech.

Weather Drones: NOAA, the National Oceanic and Atmospheric Administration had been testing the use of an Aerosonde Mark 3 drone aircraft to fly into the heart of hurricanes for more accurate storm predictions. In 2008 it was used to fly into Hurricane Noel, but was purposely sacrificed to the turbulent winds of Noel as part of the process.

Next generation weather drones will be smaller, smarter, faster, and more survivable to match the needs of virtually any research projects.

Drones are getting smaller, and for some applications, nearly invisible. When drones begin to approach the nano-scale, traditional laws of physics begin to break down, and when flying in a nano-aircraft, air molecules are too far apart to provide consistent buoyancy. But as always, our current limitations create an excellent opportunity to uncover the true laws of “flight physics“ when dealing with nano-particles.

While some science fiction writers have already speculated on the upside and downside of super tiny drones, the true potential is beyond our ability to image it. In the next section on swarmbots, I will attempt to think through a few of the possibilities, but in reality will just be scratching the surface.

From Flying Drones to Flying SwarmBots

The term swarm is applied to fish, insects, birds and microorganisms, such as bacteria, and describes a behavior of a group (school) of animals of similar size and body orientation, generally moving in the same direction.

The term “swarmbot” is used to describe this same type of behavior when it is coded into groupings of robots, in some cases, flying robots.

From a science standpoint, swarmbot technology is still barely peeking its head out of the birth canal, because the tools available to examine life in its most rudimentary form – DNA sequencing, bioinformatics, gene chips – are quite new. We are just now scripting basic models of life processes at this fundamental level, and as we re-create these processes in binary form, we’re starting to see how they work in inorganic settings.

SwarmBots were the evil villains in Michael Creighton’s book Prey, but today they also form the basis of ongoing research at places like MIT, UCLA, George Mason University, and several other universities.

So how will SwarmBots be used in the future, and what are some of the more extreme possibilities for these multi-unit robot teams?

Over the coming months we will begin to see the convergence of air technologies that enable a drone to fly and onboard capabilities that give each drone its own unique set of characteristics.

With basic drone hardware being matched up with smartphones, and the bottom-up design capabilities of app developers around the world, drones will quickly move from the realm of personal toys to functional necessities that we interact with on a daily basis.

For those of you looking to switch careers, this will become a hot one in the near future, and it won’t be just in the military.

The Day of the Drone is Upon Us