The Laws of Transparency 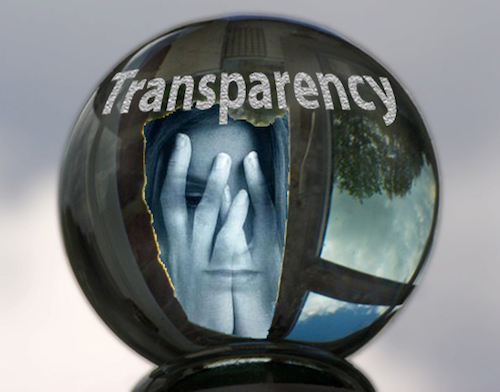 Can you feel the layers being lifted? Transparency is entering our lives in unusual ways and much like having individual veils lifted from a multi-veiled garment; we are now seeing the world around us with far greater clarity.

At the same time, the people who are being watched and observed are feeling the light of exposure as never before.

Our ability to see things causes us to take action. With this in mind, I am proposing the first two laws of transparency.

1st Law of Transparency: The clarity with which we understand the world around us is directly proportional to the likelihood we will take action.

2nd Law of Transparency: For people being observed, the clearness with which their actions are being revealed is also directly proportional to the probability they will change what they are doing.

No matter which end of the transparency spectrum you find yourself on, transparency increases awareness, and awareness causes action.

If you are wondering why so many changes are happening simultaneously around the planet today, we need look no further than the concept of transparency itself.

My wife and I often argue about the purpose of windows. I believe windows are designed for people to look out. But she feels that windows are equally well-designed for outsiders to look in.

As an example, if we hear noise coming from our neighbor’s house, we may be concerned. But if we have a clear view and see our neighbor fall an get hurt, we will instantly react by offering help.

Similarly, if we suspect someone is stealing from us, we will proceed with caution. However, once we know for sure, we will be compelled to take action.

As humans we are constantly radiating information, and this information is being detected, logged, and analyzed for use in startling new ways. Information about us is going out, and at the same time, outsiders are taking it all in.

At the forefront of exposure are the power elite.

The Power to Act – The Motivation to Act

What exactly is a cause worth fighting for? Each of us will naturally have a different answer to this question.

Every time we are motivated to act, our response will be directly related to the emotion shift in our perceptions. The stronger our emotions, the greater our response.

If you see someone being rude to your friend, it will elicit a reaction to the rudeness. But if that same person pushes your friend down a flight of stairs, you will react in an entirely different manner.

To better explain the different categories of action-reaction responses I put together the following list. As you read through this, think of the phrase “unleashing the hurricane within us.”

Small action, small response. Big action, big response. We are all powerful in our own unique ways.

Transparency today is comprised of a series of data points, all of which become clearer and more viral with each improvement in our communication and social networks. Knowing the details is only part of the equation. Having the ability to expose the details and organize a response adds an entirely new dimension.

Leveraging the power of the Internet, a single response by a person today can have a profound impact. And an impact in one part of the world can create a ripple effect around the world.

We live in an increasingly fluid society, with money and ideas being transferred around the world at the speed of light. Even the movement of people is being handled with far greater efficiency.

Transparency and the Collapse of Countries

News of uprisings in Tunisia quickly spread to the rest of the world. Thousands of information sources sprang to life as the people of Tunisia concluded they could no longer live in their present conditions.

Protests and rioting in Tunisia quickly spread to Egypt, Iran, Bahrain, Libya, and others. 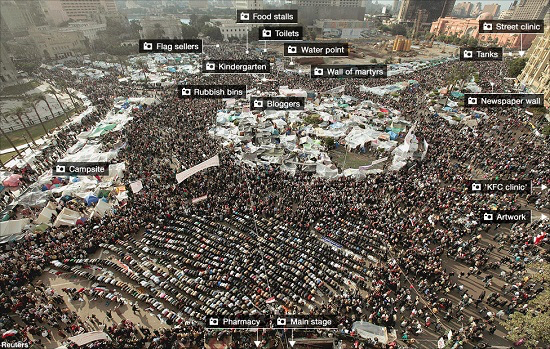 When the BBC published the interactive photo above with the caption “The camp that toppled a president,” people throughout the Middle East viewed it more as a “how to” manual for overthrowing their leaders.

Whether on purpose or just through happenstance, the camp became an emotional cauldron of activity for inspired activists to leverage their networks to overthrow their governments. The insidious acts of the country’s leaders had been growing in clarity with stories, photos and videos surfacing at every corner. But what changed was their ability to connect with others around the world and organize their efforts.

Every leader’s attempt to shut down communications on one level was met with a fresh new communications channel to keep the flow of passion and ideas moving.

In the future, the most liberating technology may well be a series of communication drones that are impervious to the country they are hovering over. At the same time, they may also be the most unsettling piece of technology for anyone who is currently in power.

When the Puppet Master has no Clothes

Over time we will begin to see the concept of leadership dramatically morph into something far different than what we think of as leadership today. And the people pulling the strings in the background will no long have the veil of secrecy to hide behind. We are entering an era where the puppet masters no longer have clothes.

Whenever to a country’s “happiness index” gets turned upside down, and people can clearly see they have been wronged, we will see a near-instant response. Many countries in the Middle East have attempted to use payoffs to quell the rising dissention. Leaders are distributing large cash payments as well as reducing the cost of food and healthcare in a bid to regain the people’s favor.

This, however, cannot be a long-term solution. As soon as people think that every time they protest and riot they will receive more money, they will turn protesting and rioting into a full-time business.

Perhaps in the future, the most powerful people in on earth future will be those who can organize a response the quickest.

A month ago I wrote an article titled “The Coming Transparency Wars.” At the time, I was looking at it through the lens of micro-transparency and how we are being probed on a personal level with far greater precision.

What I am talking about today falls more into the category of macro-transparency and the big picture of human response to a world that monitors every details. It’s no longer “big brother” watching. Instead, it is “big citizenry” in the observer seat.

The greatest danger of too much transparency is that we will become consumed by watching each other, and somewhere along the way, we will lose sight of the big picture. Each day will be filled with constant drama and we will exhaust ourselves trying to right every wrong, and solve every problem.

We are all terminally human and have very limited ability to improve who we are simply because someone else may be watching.

So is there some optimal level of privacy we should be aspiring to? I’m guessing there is, but at the moment, I really don’t know what that would be.

I do, however, think this is a matter that deserves our immediate attention, before we implode from our own scrutiny.