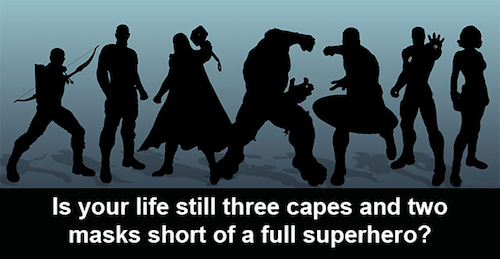 When my oldest son Darby was 8 years old, he looked at his 3-year old sister, Shandra, and pointedly said, “She’s worthless! She couldn’t save anyone!”

I was always amazed at this line of thinking because somewhere in his mind our primary reason for living was to save people. For him, making a name for yourself was not about being a regular hero, but a superhero.

Whether it’s Iron Man, Batman, or Captain America, people have become enamored with superheroes. But it’s not just in the movies, superheroes are showing up on clothing, on billboards, on talk shows, and they are even entering our corporate culture.

These fictional characters are no longer the playground of the under 20s. Rather, they’ve become big business, and with many superheroes born in the 30s and 40s, even those in their retirement years feel a kindred spirit towards them.

Superheroes transcend politics. They cross national, social, and geopolitical borders and give hope to the downtrodden, inspiration to the oppressed, and a narrow window of escape for the beleaguered and exploited.

Born out of the post-depression era, superheroes symbolized something far more important than fictional characters; they symbolized the power to overcome any adversary for a new generation.

Superman was created by Jerry Siegel and Joe Shuster in 1933 and later sold to Detective Comics (DC Comics) in 1938.

Batman was created by artist Bob Kane and writer Bill Finger, and first appeared in Detective Comics #27 (May 1939).

Moe Goodman founded Marvel Comics in 1939 and hired his wife’s cousin, Stan Lee, to work as his office assistant.

Stan Lee, in collaboration with several artists like Jack Kirby and Steve Ditko, helped create such notable characters as Spider-Man, the Hulk, the Fantastic Four, Iron Man, Thor, X-Men, and many more.

The famous first cover of Captain America showed him slugging Adolph Hitler in the face. It hit newsstands, where comic books were typically sold, about a year before the U.S. officially announced its involvement World War II.

The August 1962 edition of Amazing Fantasy, featured “The Amazing Spider-Man” and it became Marvel’s best-selling issue in months. Spider-Man quickly earned his own comic and became, in Stan Lee’s words, “America’s most different new teen-age idol.”

Though Bob Kane created the first Batman comic just one year after Superman’s debut, Batman has since evolved many times.

Michael Uslan is credited with bringing Batman into the modern era by producing Tim Burton’s 1989 Batman (staring Michael Keaton), the top-grossing movie of the year.

In 2005, Batman Begins was released to theaters as a reboot of the Warner Brothers film series, directed by Christopher Nolan and starring Christian Bale as Batman. Its sequel, The Dark Knight (2008), set the record for the highest grossing opening weekend of all time in the U.S. and was followed by The Dark Knight Rises (2012).

Since superheroes are as varied and different as the people who create them, there are no one-size-fits-all formulas for inventing them.

1.) Superheroes are Timeless – Superman is now 82 years old and Batman, a mere 76. They are not only timeless, with their ability to morph with the fashion industry, physical trends, and new forms of art to add realism, they look far better now than ever in the past.

2.) Scandal-Proof Reputations – Unlike having fallible humans like Bill Cosby, Jared Fogle, Lance Armstrong, or Charlie Sheen serving as the spokesman for Jell-O, Subway, Nike, or Fiat, a superhero endorsement means you’ll never have to worry about a personal scandal, negative headlines, or being thrown into crisis management mode.

3.) Network Effect of Brand Value – Whenever someone mentions Spiderman, Daredevil, or the Flash in any form of media, the value of the brand increases. Each superhero character is a piece of intellectual property that grows exponentially in value along with every hyperlink between heroes as well as every crosslink between online and offline channels.

4.) Defendable Form of Intellectual Property – Every superhero is a living, breathing trademark that can be managed and defended in court. Disney has made a fortune defending its characters and will continue to do so long into the future.

5.) Never Ending Storylines – Superheroes have super problems, and every problem creates another story to be told. Unlike formulaic television shows where they run out of good material, being a superhero is a never-ending journey. They can live on forever.

6.) Always Politically Correct – They may get it wrong in the beginning, but as constantly morphing characters they can change along with the times.

7.) The More Evil the Villain, the More Valuable the Superhero – Villains are important. Without a good villain, there is no one to hate and no bad person to overcome. What would Star Wars be without Darth Vader, or Superman without Lex Luther, or Daredevil without Kingpin?

8.) They Transcend Issues of Race, Ethnicity, and Gender – Superman is not Japanese, Croatian, Indian, or American. Superman is an alien, born on another planet and living on earth. Do we think less of him because he’s alien? Not at all. We admire superheroes for what they can do, not their skin color, heritage, or gender.

9.) They Symbolize Hope – Children in even the most depressed neighborhoods in India, Africa, and Brazil can be inspired and dream of better times ahead when they immerse themselves in the lives of their favorite superhero.

10.) Reliably Trustworthy – They are better than we are. Sure they make mistakes and live complex fictional lives, just like our complex real lives, but their intentions are good, and we can always trust them to do what’s right in the end.

11.) Knows the Difference Between Right and Wrong – You can always count on a superhero to make the right decision even when it appears there are no right answers available. Superheroes have made a fine art of beating the no-win “prisoners dilemma” as it plays out in its many forms.

We are entering a “superhero era.”

Each of us think about superheroes differently, but they are far more than entertainment.

For many, they add purpose, meaning, and inspiration to a world often devoid of those qualities.

Some will use superhero-logic to decide their career path, who to marry, and where to live.

For others, they prove to be the reason for getting up in the morning. They remind people there is a better “you” waiting to get out.

In some extreme cases they are a deciding factor between suicide and finding new reasons to live.

Superheroes are serious business, and until you come to grips with exactly how serious, you’ll be missing countless opportunities in the years ahead.