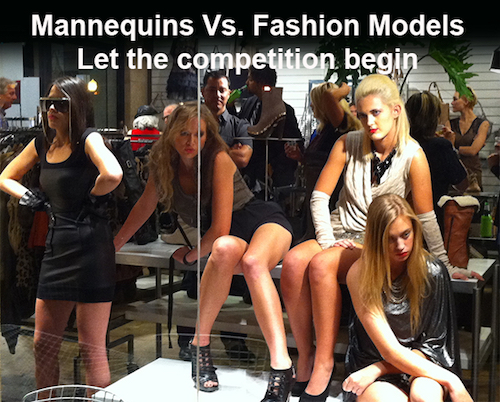 If it weren’t for their glowing eyes, I would have sworn they were live fashion models dancing in the store window.

Moving smoothly to match the music playing in the background, each of the seven perfectly proportioned mannequins swayed to a carefully choreographed set of moves designed to draw attention to the clothes they were wearing.

The eerie feeling that they were watching me as much as I was watching them was not a mistake. They were indeed looking at me.

In fact, each move was being used to carefully assess my reaction on a millisecond by millisecond basis, morphing body proportions, adding and lowering height, making nipples more or less visible, altering the hue of eye shadow, and transforming the smile from pouty disinterest to happy engagement with mesmerizing precision.

When I caught myself drooling I knew that they had touched a nerve. As seconds turned into minutes, I realized that each of the mannequins were competing for my attention.

Being a guy who always hated being asked to go dress shopping, and even offering to take a beating rather than have to experience anything like that ever again, I was quickly changing my mind.

Obviously they knew I wasn’t going to buy woman’s clothing, but the longer my gaze was held by theirs, I wasn’t so sure.

It was only around the 18-minute mark that I realized a large crowd had gathered next to me. The mannequins hadn’t managed to convert me from casual observer to active buyer so they were now working on other people in the crowd.

With women, it was amazing to watch how the mannequins morphed into an almost exact replica of the person looking at them. But it was a better version of them, something they would aspire to become.

Almost on queue the mannequin would flash a knowing blink and ladies, in what could best be described as a hypnotic-like trance, would reach for their phone, click on the “purchase” button, feel absolutely nothing as they had their body scanned, and leave knowing full well that a perfect fitting outfit would arrive at their home within an hour or so.

No longer the passive ornaments used in today’s retail stores that merchandizing experts hope, at best, to garner an occasional fleeting glance, these mannequins were destined to serve as stand alone sales agents, never requiring a coffee break, sales commission, health insurance, or even an encouraging thank you.

Welcome to the world of interactive mannequins, the life-sized body models endowed with ample enough technology to make even the nerdiest of nerds stand up and pay attention. 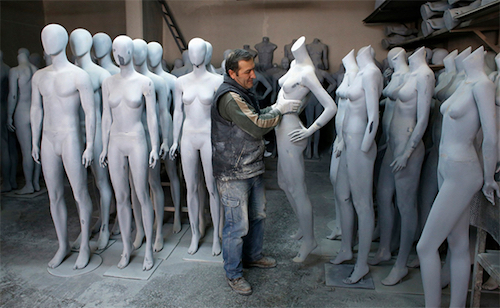 Initially designed to support the arts, mannequins have been an integral part of human culture for centuries. However, the path of stationary mannequins has been on a collision path with other forms of tech like animatronics and robotics for a long time.

Animatronics had its roots as far back as 1515 when Leonardo da Vinci designed and built the Automata Lion to impress the King of France. Over the centuries that followed, a number of ingenious self-operating devices, or automata, were built paving the way for such notable advances as Sparko, The Robot Dog, featured at the 1939 New York World’s Fair and the Enchanted Tiki Birds first making their appearance at Disneyland in 1963.

Animatronics paved the way for Honda and their teams developing humanoid robots in the 80s. In 2000 Honda introduced ASIMO, a cute little walking talking robot-person that raised the bar significantly, and gave us a whole new understanding of what machines were capable of.

Since then, humanoid robots have become an integral part of our culture, appearing in newscasts, television shows, and movies on a daily basis. It is no longer uncommon to see a robot giving a TED talk, a TV interviewer asking a robot about its work life, or having robot dancers taking center stage at the Consumer Electronics Show.

But until recently, mannequins have remained little more than a plastic or wood stand-in for the human body. Commonly used by artists, tailors, and dressmakers, most of us think of them as little more than ornamental figures used to display the latest fashions.

In late 2013, French fashion designer Jean Paul Gaultier unveiled a stunning exhibit at The Brooklyn Museum in New York City. Working with 30 animated mannequins manufactured by Mannequins Jolicoeur International, Quebec, the figurines came to life, with some laughing, winking, smiling, whistling, and even speaking. It was all done in such a realistic way that it made visitors do an instant double-take.

The animation effects were accomplished by a high-tech, high-definition audiovisual system that projected facial images on to the mannequins.

In addition to the animated mannequins, the exhibit also featured another 110 ground-breaking mannequins that used unusual color finishes to create skin tones that corresponded with the diverse ethnicities that Gaultier hoped to portray.

Even though this exhibit dramatically raised the level of realism for modern day mannequins, the true potential for this technology will be unleashed over the coming years with the Internet of Things. 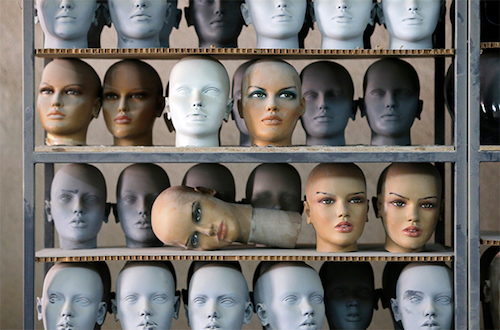 So how do today’s lifeless pieces of plastic end up evolving into full animatronic fashion models that spend more time watching us than we spend watching them?

Most of the advancements in “mannequinology” will inch forward one Internet-of-Things device at a time, but the real magic will occur later when all of the pieces are assembled and synced together like a symphony of moving, sensing, twisting, reacting pieces all working in concert around one central objective.

With inflating, deflating muscles, perfectly timed eye movements that create broad smiles as they pierce your consciousness, and morphing styles and fashions that have an amazing way of flowing perfectly with every body contour, the real trial will come when a staged test will determine whether or not these mannequins can outsell an equivalent team of live fashion models in the world’s major fashion centers of Paris, New York, London, Barcelona, Rome, Berlin, Sydney, Los Angeles, Antwerp, and Shanghai.

Much like IBM’s Watson computer pairing off against Jeopardy champions Ken Jennings and Brad Rutter in 2011, the “Mannequin Vs. Model” showdown will inevitably end with machines stealing the show.

Fashion models living in human bodies with human limitations will have little hope of competing with the chameleon-like color-changing, shape-shifting features of future machines with full sensory capability of reading someone’s emotions with 100% accuracy.

At the same time, even though they can closely replicate human appearance, it will be a long time before they have the ability to simulate the warm and caring nature of genuine people.

For many, the idea of having fashion models, that many of us regard as the ultimate form of personal beauty, lose in a one-on-one battle with synthetic humans is a rather depressing thought.

This notion that lowly machines, made of gears, motors, and switches can evolve into lifelike forms that can out-flirt, out-fox, and out-finesse even the sexiest among us is both confusing, depressing, and troubling all at the same time.

But before you resign yourself to this new state of depression, keep in mind that machine perfection like this will only exist if humans create it, manage it, and repair it when it breaks down. And it will always eventually break down.

It will also enable people to aspire to a higher calling. Rather than living the life of human works-of-art, this may be nature’s way of pushing us for more – more wisdom, more compassion, more of what it means to be human.

I would invite you to weigh in on this line of thinking. Will we be having a showdown between fashion models and humanoid mannequins anytime soon? Will people still remain in control, or will some form of machine intelligence create an entirely new set of problems for us. I’d love to hear your thoughts.