The Coming of “Peak Car” 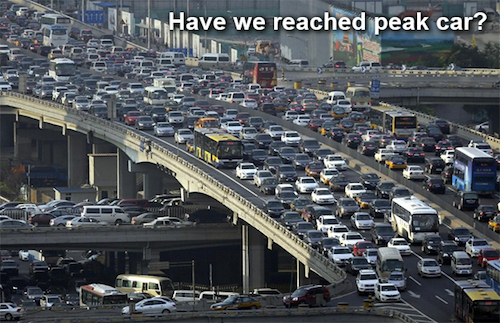 In what year will the number of cars in the world reach its peak and auto sales overall begin to decline?

For most, it may be surprising to realize we’re already there in the U.S. Growing data shows many wealthy economies have already hit “peak car,” a point of market saturation characterized by an unprecedented deceleration in the growth of car ownership, total miles driven, and annual sales.

Vehicle traffic grew at a staggering rate worldwide for decades. But that all changed in 2007. Some refer to it as the perfect storm with the combination of economic collapse, digital revolution, and major shifts in urban lifestyles.

Several alternative transportation startups also began in that timeframe led by the likes of Zipcar, Uber, Lyft, and SideCar. This was followed by the emergence of connected cars, growing electric vehicle markets, driverless cars, declining birthrates, and increasingly congested highways in virtually every major city in the world.

Mounting indicators are painting a clear picture of an automobile industry only a few years away from reaching the top of the bell curve in the rest of the world as well.

Even though the continent of Africa with its high birthrates and under developed infrastructure is a long ways from reaching its automotive peak, today’s wholesale shift in transportation thinking has caused alarm bells to ring throughout the entire automotive industry.

So how will this transformation play out?

In just a decade or so, owning a car may well be relegated to the hobbyist, luxury market, much like owning airplanes or horses today.

Relying on a personal vehicle, with personal responsibility for finance charges, licensing, taxes, repair costs, insurance, gas, oil changes, cleaning, and complying with 10,000 laws about parking, speeding, noise, pollution, stop signs, stop lights, and construction zones will soon be a thing of the past.

In fact, owning a car has become a painful experience. From the salespeople who sell you the car, to the finance guys in the background, to the cops watching your every move, it’s easy for car buyers to feel like tiny rodents with swarms of vultures circling overhead.

With a history of scam artists and con men leaving their indelible mark, the auto sales industry has begun a slow march towards is being regulated out of existence.

People have put up with it because they didn’t have any other good options. But new options are already here and more are on their way. 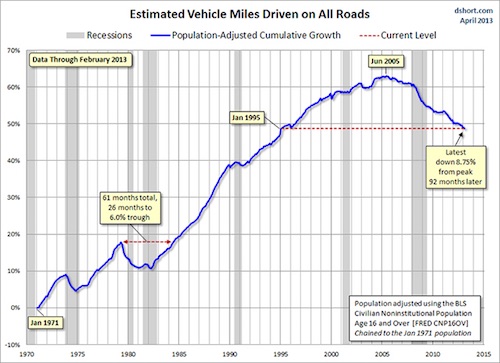 Shifting from “Just-in-Case” to “Just-in-Time”

On a recent trip to Australia I was shown a house that was owned by Elton John. He owned it for 12 years but only showed up there once.

In the past, rich people were always defined by how much they owned. Real estate, expensive cars, vacation homes, and fancy jewelry have long been the symbols of greatness.

But today’s young people think about it differently. Our physical trappings weigh us down. They occupy our mind, cloud our judgment, and consume our time. Our possessions become our obsessions.

No, the world of physical ownership will not abruptly end over night. But the speed with which we begin to migrate in that direction is about to pick up.

We own a car just-in-case we need to go somewhere. But what if there were other options?

Today 144 million Americans spend an average of 52 minutes a day in their car, most of it spent commuting to and from work. In the future, we will not show up for work just-in-case we need to be there. Rather, we will figure out schemes for being there just-in-time, either virtually or physically, as the needs of business dictate. 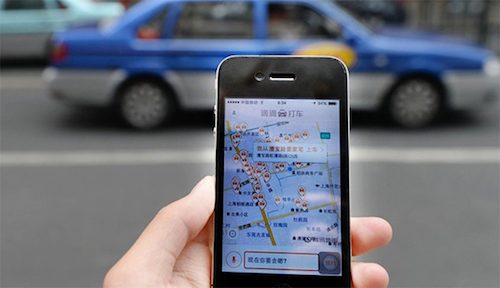 If the average non-productive time spent in cars were eliminated, how else could commuters spend their extra 52 minutes a day?

On-demand transportation is already happening with companies like Uber and Lyft. If we eliminate the driver, costs will plummet.

According to Lux Research, by 2030, the self-driving car market will grow to over $87 billion.

It’s at this point where car companies will begin changing their business model, and rather than charging for each vehicle sold, they will partner with fleet managers and charge for every mile the car is driven.

Today, auto manufacturers are incentivized to sell cars, and the more cars the better. Well, it’s better for them but not better for the cities and countries that have to deal with the deluge of cars.

Car companies will continue to sell cars until cities become dysfunctional, and we are seeing this play out all over the world. Most municipalities are ill equipped to build the necessary infrastructure to accommodate the rapidly growing number of cars.

My sense is that in an on-demand transportation world, car companies will be paid for every mile they’re driven, so they will begin focusing more on durable vehicles, capable of traveling a million miles or more. Fewer vehicles, that are capable of lasting far longer, will equate to a much more profitable car company.

At the same time, fleet operators faced with purchasing 10,000 vehicles at a time will be a vastly different consumer than today’s personal-use car buyer. Operational efficiency and repair records will be the primary considerations, and with large numbers of vehicles involved in each purchase, they will push had for the lowest possible price.

Since most people will no longer own their own cars, far less attention will be paid to things like style, color, branding, and status.

The losers in this emerging world will be insurance and finance companies, and all the dealerships dependent on sales. At the same time, traffic cops and traffic courts will go away along with all the lawyers, judges, parking lots, junk yards, taxi and limo services, and thousands of other tiny businesses supporting our current human-centric driving world. 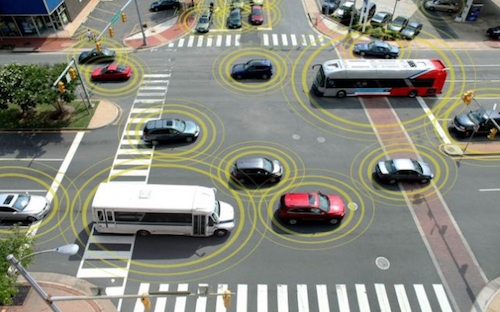 We will very likely reach “peak car” for the world sometime over the next ten years.

Even though the auto industry has been glacially slow at adapting to change in the past, the on-demand transportation shift will happen quickly, meaning years instead of decades.

Policy-makers will find it far easier to regulate a few large fleet companies than millions of individuals. Noise, pollution, drunken driving, car related deaths and injuries will all become a thing of the past.

Most consumers will welcome the change as it frees up their time and money for more important uses.

As always, there are many things that can go wrong along the way. Hackers causing cars to crash into each other, unions preventing some states from allowing driverless cars, protests by people losing their jobs, or driverless cars being used in some terrorist plots are all potential threats to this scenario.

The path of progress is never smooth, so expect many things to go wrong along the way.

However, I see “peak car” as a very positive development. But I’d love to hear what you think. Is this a good thing? Will we all be using driverless cars within the coming decade? Will “peak car” happen in the next ten years, and if not, why not?