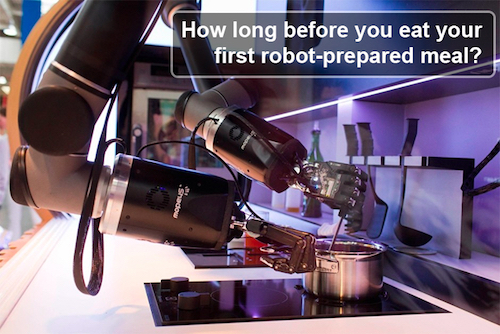 Will humans soon be battling for their survival against robots?

The age-old idea of man vs. machine is far more nuanced and complicated than simply having crazed machines killing people just because that’s what they’ve been programmed to do.

However, if we ask, “Will robots, machines, and software replace many of our workers as we move into a far more competitive man vs. machine era?” – the answer will undoubtedly be yes. But following that with a second question, “How long will it take?” – is far more revealing.

When it comes to autonomous cars, it will be decades before the majority of the world relinquishes keys to their automobiles.

When it comes to passenger drones that quickly fly people from point A to point B, it will again be decades before the majority of the world has access to this kind of technology.

The same goes for machines that build houses, do laundry, and grow food.

We are at the beginning of a very long transition, and our relationship with the hardware, software, and autonomous machines that are about to enter our lives will go through as many shifts and changes as the devices themselves.

At times we will love them, hate them, push them off a cliff and turn around and buy even more of them. The hype cycle of automation will be filled with countless shattered dreams; yet technology will find a way and our humanity will survive in spite of itself.

That said, we will measure our progress with benchmarks of accomplishments. In much the same way as IBM’s Deep Blue computer beat the reigning world chess champion Gary Kasperov in 1997, we will see a number of staged competitions – man-vs-machine showdowns – to ratchet our way into this new period.

Undoubtedly, one competition quickly inching its way to the top of this benchmark bucket list will involve food – the Iron Man Chef vs. the Robot Chef. 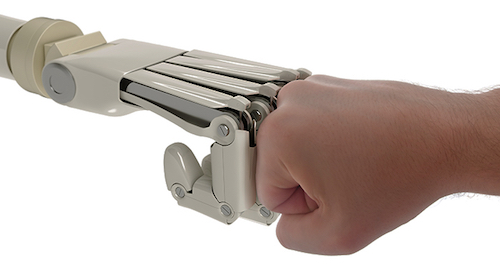 NOTE: I’m not intending to show gender bias, but so far there have not been any women involved in these competitions. 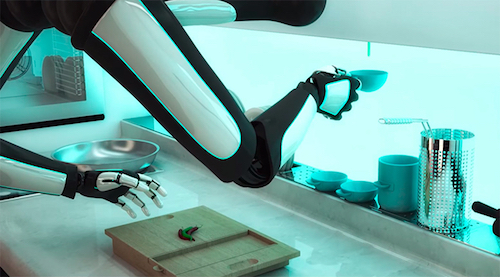 The original “Iron Chef” cooking show debuted in Japan in 1993. As a timed cooking battle built around a specific theme ingredient, some of the top chefs from “around the world” have competed in the “kitchen stadium” contest to see who’s best.

The popularity of the show in Japan caused versions of the show to spring to life in the U.S., Canada, Vietnam, Thailand, Indonesia, UK, and Australia.

Having a robot chef as a contender will pose a number of unusual complications. While Moley Robotics created the world’s first robotic kitchen and has plans to turn it into consumer product by 2017, there is a big difference between preparing food based on a preset ingredient list and competing against the best chefs in the world.

Cooking is very much a human sport, based on tastes and smells, neither of which are quantifiable from an engineering standpoint. There is no such thing as a periodic table of tastes and smells, at least not yet. Nor is there the digital equivalent of a nose and taste buds, essential pieces of sensory equipment that every human chef is already equipped with.

That means the only way for a robot to compete will be to comb through terabytes of data about human preferences and reverse engineer desirable combinations. While that may be possible, the robot will still be at a disadvantage when it comes to smelling and tasting their way from an average recipe to an extraordinary one.

From more of a big picture perspective, our robot chefs are still a long ways from being able to go to a grocery store or food market and pick out the freshest ingredients. Judging the quality of fruits, vegetables, and cuts of meat are human skills that are hard to reduce to machine algorithms.

Eventually all this will be possible and there are undoubtedly new technologies in the works that will make it happen sooner than later. Yet winning a competition like this is only one step in a million-step journey.

A one-time event does not a trend make!

As machine intelligence moves its way up the exponential growth curve, I’m estimating a robot chef will win this type of competition somewhere around 2025.

But before that happens we will see driverless cars beat human drivers in an Indianapolis 500-type race, robotic bricklayers beat human bricklayers in a house-building competition, and robotic jockeys beat human jockeys in a Kentucky Derby-like contest.

Keep in mind that staged competitions like this are a form of marketing. It’s an entertaining event designed to capture the whole world’s attention for the purpose of conveying a message – a marketing message.

The competition is never intended to destroy a sport or somehow wreck a piece of the entertainment industry. Chess and backgammon tournaments are still happening today and Jeopardy is still a money-making TV show. Rather, it’s to prove a point. IBM used it very effectively to prove they were the industry leaders in the area of human-thinking computers.

At the same time, I think IBM got it wrong. With both the 1997 and 2011 events, the event was staged, the computer won, and everyone went back to business as usual. When savvy marketing people are involved, the one-and-done approach leaves tons of opportunity still on the table.

If IBM had lost the first 2-3 rounds of the competition, they could have done a far better job of milking public sympathy and, in the end, it would have seemed like a far greater accomplishment.

As humans, we are still very much in control of our own destiny. If we don’t happen to like the path we’re on, we can always change it… or can we?