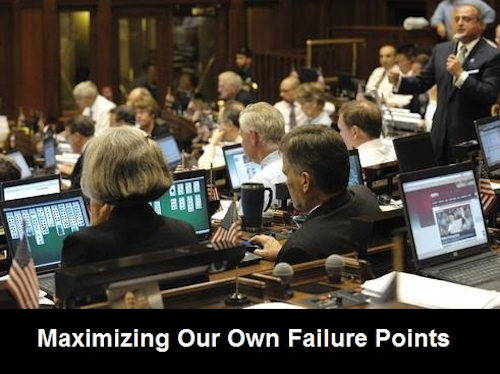 The total number of governmental bodies in the U.S. is approaching a staggering number – 90,000. During normal economic times there is plenty of money to go around, but now every city, state, county, parish, township, and special taxing district is competing for the same tax dollars that the federal government is.

Governmental entities are living, breathing organisms, each fighting for survival. With tax shortfalls cropping up in nearly every corner of the U.S. economy, most are struggling to preserve their own piece of the pie. With money declining, many are compensating with unusual policy decisions that they hope will shore up their balance sheets.

But it’s not just about money issues. Along with taxing authority, each one of these governments has its own ability to create and enforce new laws, rules, and regulations. Working with a limited set of tools in their toolbox, governments have resorted to using laws and regulations to solve virtually every conceivable problem. The sheer volume of laws emerging from these 90,000 rule-making bodies is truly stunning.

Abraham Lincoln once said, ““The best way to get a bad law repealed is to enforce it strictly.” Similarly, the quickest way to bring America to its knees is to strictly enforce all of its laws.

Most of the governmental entities are funded through some form of sales tax, a system designed during an entirely different era that is now on the verge of collapse.

At the heart of current debates is a 1992 landmark ruling by the Supreme Court that determined retailers are not required to collect sales tax from shoppers unless they have a physical presence in the state where customers live. Initially, this ruling applied mainly to catalog companies and home-shopping channels on TV. But it also applied to the emerging online retail industry, giving them a distinct competitive advantage, and consumers a reason to change their buying habits.

Local retailers who have invested in their community, who send their kids to local schools and volunteer for local charities, find themselves competing with faceless online companies, most of whom have never set foot in town. The problem with current sales tax laws are that they create a disadvantage to those who are local. But here is where it gets complicated.

Some states now claim that anyone doing affiliate sales, placing referral ads on their blog sites and receiving a commission, can be construed as being a local sales agent, and therefore the entire transaction is subject to sales tax. As a result, companies like Amazon and Overstock who count heavily upon the no-sales-tax advantage have cancelled affiliate relationships with anyone doing affiliate sales for them in those states.

Rest assured sales tax issues are but a small piece of a much larger problem.

Complexity creates failure points. Every decision point along the way increases the odds that something will go wrong, and we have moved into an era of non-stop decision points.

A country with 90,000 governments, whose primary tools for solving problems involves creating new laws, is a country that has maximized the number of failure points.

As I’ve often said, “The health of a nation is inversely proportional to the number of laws needed to govern it.” From this perspective, we live in a very sick nation.

Over time, these complexity-laden systems will invariably descend into the lower levels of disfunctionality, with anger and finger-pointing setting the stage for more graphic battles to follow.

In a tough global economy, the good people of the U.S. have chosen to tie ankle weights of complexity around their legs as they attempt to swim towards a better economy.

Backcasting is a tool used by futurists to look at the present from some point in the future.

In much the same way we stand in amazement as we read about the Salem witch trials, or 18th century doctors who used bleeding to cure diseases, or Polynesian tribes who sacrificed virgins to appease the volcano-gods, a country comprised of 90,000 governments is destined to appear equally ludicrous in the future.

One hundred years in the future, people in 2110 will look back at this era of history and marvel at the insanity of our times. They will be amazed at how people managed to live in a country with more laws than anyone can count, a tax code that, according to NPR, is over 67,000 pages long with 1,638 different tax forms, and a justice system that controls one out of every 31 people in the country and has the highest incarceration rate of any nation in history.

All of our defensive posturing for maintaining the status quo will quickly deteriorate into the equivalent of modern caveman thinking as future generations make us the punchline of their jokes and the universal symbol of “what not to do.”

So how do we reverse the avalanche of complexity that is cascading around us? In philosophical terms, how do we create the immovable object to deal with the unstoppable force?

The short answer is that abrupt change is simply not possible. Systems that have evolved over decades cannot instantly be traded in for something new.

With a society that is already heavily invested in our current systems, and people already pre-programmed to think and act accordingly, the operating system can only be changed by rewriting the source code. In short, we need to create systems for changing the system.

We currently have no check-and-balance system for impeding the excessive law-writing now taking place. Simply by adding friction to the rule-making process will slow it down. Adding a lifespan to the laws will help force decision-makers to focus on the highest priorities.

Here are a few examples of system changes that may help:

History has taught us that governments can only exist if there is an adversarial relationship between a government and its people. For this reason, few have bothered to question the abrasive relationships that have developed.

However, business and government need to maintain a synergistic relationship. Governments provide the operating system and businesses shares the wealth, proving the revenue streams upon which governments operate.

Companies in the U.S. are continually facing new forms of global competition, and anything that makes it more difficult to conduct business, makes them less competitive.

For a country to prosper, it’s not necessary to be perfect. When we find ourselves being chased by a bear, we only need to be faster than the other guys.