Addressing the Problem of Addresses 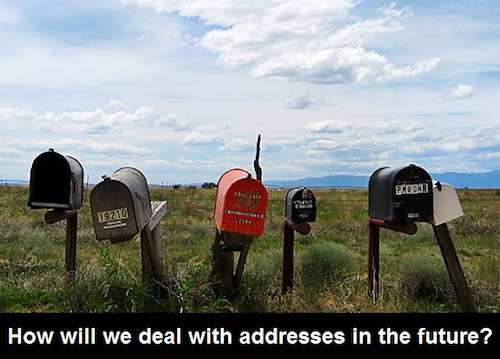 When Hurricane Katrina hit the city of New Orleans the US Post Office was faced with a major dilemma. For countless centuries, the modus operandi for the post office was to deliver mail to a location, and the individuals who lived at that location would stop by and pick up their mail. But following the hurricane, the floods had destroyed all of the “locations”.

Normally, if a location has been destroyed, the post office will simply put a forwarding address into the system and the mail will reroute to the new location. However, there was nothing normal about the Katrina disaster, and countless thousands of people were suddenly placed in limbo, transported to cities across the country, some to live in the new city permanently, others to continue on a nomadic journey that would find them living in as many as 10-15 different locations over the course of the coming years.

Katrina victims and the people trying to reach them by mail faced a significant delay, at best, as their mail was either held up in the post office of origin or sent to a succession of temporary addresses. At worst, many letters became permanently lost as the legacy systems inside the U.S. Postal Service tried desperately to adapt to some rather extraordinary circumstances.

The average person in the US will move 16 times over the course of their lifetime, roughly once every five years. In any given year, approximately 20% of the population will change the place they call home.

Complicating the problem further, the average teenager today will hold 11 different jobs by the time they are 30, and with work becoming more project-based, that number is sure to climb.

Similarly, in 1995 the vast majority of all email addresses were for location-based computers. You had to be using a specific machine to get your emails. Today, the email systems have been adapted so people can receive their email where ever they may be.

All of the more recent communications technologies, such as text messaging, Facebook, and Twitter, have adopted the policy of sending information to the individual as opposed to a location.

While it is true that in some cases we want things delivered to a business at a specific location, such as parts for a manufacturing operation or books for a school, our current systems don’t allow for the separation of individuals and locations. Consider the following scenarios. 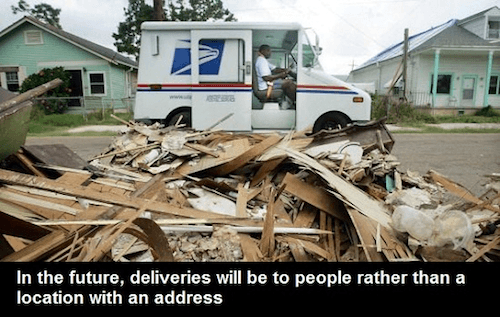 The world of addressing has become a growing source of friction, slowing the connection between buyers and sellers. Most people know how difficult it is to receive a “signature required” package through FedEx or UPS. Wouldn’t it be nice to have the item delivered directly to you, no matter where you happen to be?

So, is it possible to create a technology for the U.S. Postal Service, FedEx, and UPS that will enable them to switch from static location-based addresses to dynamic, ever-changing personal addresses? More importantly, if someone invents the technology, will any of the delivery services implement it?

The starting and ending nodes of our connected world are often major disconnect points. The efficiencies we have come to expect in the online world simply don’t translate well into our current systems in the off-line world.

So where do we go from here? What are the systems we need to create to solve these problems? The answer to these questions is a system that will redefine our future.

← Systems Thinking and the Future of Education Maximum Freud →