Death to the Gatekeepers 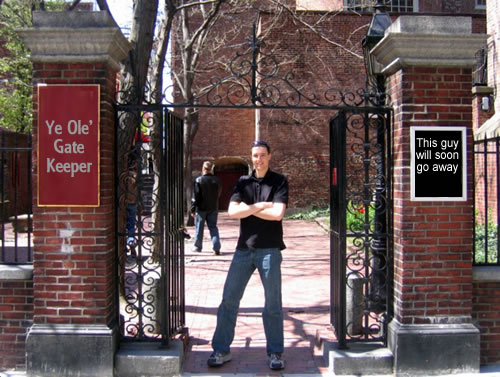 Recently a decision was made to allow people in 12 South American nations to travel from country to country without visas. Much like the efficiencies gained from a similar decision in the European Union, these countries are beginning to realize that life can exist without all the gatekeepers.

In the not-too-distant past, every creative work, whether it was a song, a movie, artwork, poetry, or an article for publication, had to be approved by at least one other person before the public could see it. Often times the work had to be screened by layer upon layer of reviewers so only the very best accomplishments would rise to the top.

Throughout history the gatekeepers kept us safe. They saved us from the bad people. But they also tried to save us from the boring and uninteresting, the radical and the off-balanced, the rumors and lies, and most importantly from the people who had a different opinion or heaven-forbid, a different agenda.

Gatekeepers were the ones who said “No!” And they said “no” a lot.

For businesses, the gatekeeper system was all about quality control, maintaining the image or brand of the company, and producing the highest quality products. Gatekeepers were also used to find the select few people who would be hired, the next generation of minds to build the company around.

For governments, the gatekeeper system was intended to maintain the integrity of a system, manage an agenda, or further the notion of fairness and equality. Gatekeepers are placed at the entrance to a country, in airports to maintain security, or in weigh-stations along highways for truckers.

But the gatekeeper choke points for society are beginning to erode as people figure out ways to circumvent them. And they are finding great power in these emerging new forms of self-control.

Enterprising people have begun to find the keys to unlocking their future, and it’s a future that doesn’t include the impenetrable barriers provided by gatekeepers. Publishing an article no longer requires the approval of an editor. Articles can easily be published on blogs or web pages without ever needing someone’s approval. Videos and podcasts can be posted on iTunes or YouTube 24 hours a day, seven days a week. While this may seem like a subtle shift to some, the true impact is far more significant than any of us can imagine.

The no-gatekeeper lifestyle means you can create whatever product you want and sell it to people around the world without ever having to get someone’s blessing. While some regulatory issues may still apply in certain markets, the majority of products can be sold without any hoop-jumping.

When a gatekeeper goes away it doesn’t mean that there are no controls. Instead of an individual saying yes or no, either a market or a community will decide. For most, these market forces are viewed as being more democratic and by default, fairer.

In essence, the true shape of a demand curve can be revealed once the gatekeepers are gone.

Death to the Gatekeeper

While people from generations past still believe we can’t live without gatekeepers, a new generation of freedom-loving entrepreneurs have made it their mission to find ways to circumvent current controls. In their minds, a system with a gatekeeper is an opportunity waiting to happen – kill the need for gatekeepers, free the world, and make money in the process.

Most importantly, the employment gatekeepers are going away. More and more people are beginning to find ways to carve out a solid income stream without ever having to be employed. Bloggers, podcasters, writers, graphic artists, musicians, photographer, videographers, and thousands of other micro business entrepreneurs are figuring out ways to generate revenue streams without having an employer control the paycheck. This is only the tip of the proverbial iceberg.

Making money online, either as a part-time or full-time Internet entrepreneur, is becoming more and more appealing. New websites are springing to life on a regular basis with wealth-sharing mechanisms for the contributors. And each of them represents an income stream without a gatekeeper.
Here are just a few of the best known sites for making money online:

Each of these sites allows you to do what you enjoy while they take care of sales and distribution. Other entrepreneurs have begun finding micro-markets for seemingly insignificant online things like sound effects, generic video clips, ringtones, and MySpace personalities.

Every day more are appearing, offering income-generating opportunities in self-publishing, social networking, and uploading artwork. There has never been a better time to head into that home office, log on and start earning!

It’s not realistic to expect that all gatekeepers will go away. However, it is entirely reasonable to expect that at a bare minimum, all gatekeeping systems will go through a period of tremendous change.
Look for old fashioned monopolies like electric, gas, and water utilities to be dismantled. High pain taxation systems like income tax are doomed and will be replaced with more efficient tax systems. Many of our court systems will be re-architected, and some, like our traffic courts, will simply go away. Higher education continues to cling to their ivory towers, but these towers are destined to topple.

We live in a global marketplace and every industry is fighting for new efficiencies and a distinct competitive edge. Since national economies are dependent upon revenue streams created in the business world, governmental systems will be forced to keep pace with the new tempo of business.
In the end, the competition between businesses will boil down to performance efficiencies and the freedom a business has to create its own efficiencies. Governments with the least impediments will flourish as the businesses that support them come out the winners.