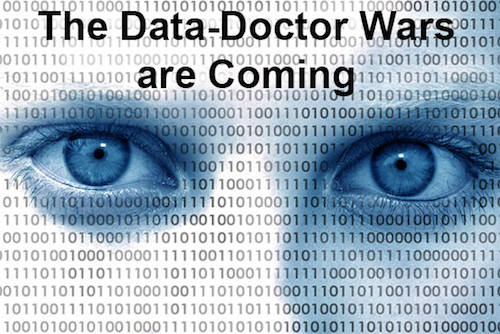 “2014 will be the year the ’quantified self’ goes mainstream.” Those were the words Silicon Valley prodigy Marc Andreessen used in a recent article to describe changes about to happen to American healthcare.

The ‘quantified self,’ also known as lifelogging, is a trend toward gathering all possible data about our daily life, such as the food we eat, quality of the air we inhale, our mood, oxygen levels, as well as our physical and mental performance.

So what if you could cut your number of sick days by 80%, sleep better at night, be more alert, more efficient at work, and still have plenty of energy left for family and friends at the end of a busy day?

As we add an increasingly large number of sensors to our bodies and the world around us, our understanding of cause-and-effect health issues will grow exponentially.

This movement combines smart devices and the Internet of Things with health monitoring apps to give us a better idea of how to optimize virtually every metric associated with our lifestyle, health, and physical performance.

We are on the verge of crossing over from science hype to science reality, with the prospects of creating a tremendous upside. Yes, there will be more than a few battles fought along the way between doctors and health industry executives, but in the end, it doesn’t have to be a win-lose situation. Here’s why. 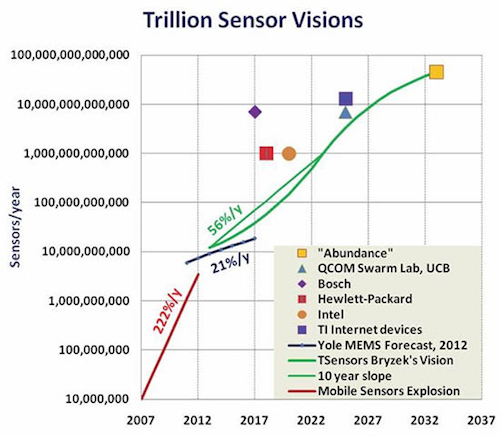 On Oct 23-25, 2013 an event was held at Stanford University called the Trillion Sensor Summit, organized by Janusz Bryzek, VP of Fairchild Semiconductor. Bryzek predicts we are on an exponential growth curve with sensors and will reach the trillion-sensor milestone by 2024. His roadmap also shows us reaching 100 trillion roughly 10 years later.

Cisco and GE are both evangelizing the Internet of Things and gearing up for it. To create their vision, they need two things: An eager public and literally trillions of sensors, so they’re definitely in sync with Bryzek.

According to Cisco, the Internet of Things is already comprised of over 10 billion moving parts.

To make everything evolve into one well-orchestrated symphony, with all the right data coming from all the right places at the right time, we’ll need more sensors. Most of these sensors cost less than $1 today and consume almost no energy, and they will cost far less and consume even less energy in the future. So it’s all boils down to mass manufacturing and deployment, and more than a few key innovations along the way.

There are, of course, more than a few unintended consequences lurking behind every newly opened door. We now know how easy it is for devious organizations like the NSA to peer into our emails and location data. The same scanners used for security checks at the airports can also be used for thousands of other nefarious misdeeds.

A hyper-connected world not only increases the opportunities for big-time data collection, but also for hacking.

Sensors, along with a raft of other transmitting devices, may be used to shower us with subliminal and overt marketing messages for nearby restaurants, theaters, and shops. And it could get even worse with a stalker’s ability to monitor our every move.

But as always, all of these problems create an equal and opposite opportunity, and someone will invariably figure out solution. 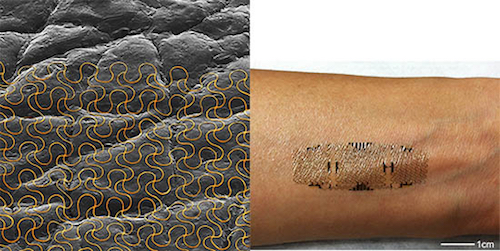 Printable sensors on the skin

Doctors have traditionally been late adopters when it comes to gadgets and new technology. Working seemingly endless days and jumping from one crisis to another has left them with little time to learn. And as highly educated individuals, they’ve been somewhat intimidated by things they don’t understand.

With technology encroaching on virtually every aspect of our lives, and computers operating with an entirely different set of rules than biology, many have grown increasingly resistant to change, even though it could make their life easier.

As we move into an era of heavy downward pressure to control costs, and in many cases, subvert their authority altogether, the result will likely be an all out war between doctors and the executive teams trying to create more efficiencies.

At the same time, this doesn’t have to be a win-lose situation for doctors because there will still be plenty of work for physicians.

The dirty little secret as to why healthcare hasn’t advanced as quickly as many of the other sciences is that we’ve run up against the limits of human capabilities. There has been strong resistance to anything that may by-pass a doctor’s authority, and the sheer limitations of time, money, and talent has left many with little to no understanding of their own health conditions.

Over the coming years, smart devices will begin to disrupt ‘business as usual’ in the medical world. As a result, we will see many studies commissioned to determine if the devices are making as good of decisions as doctors.

“Cost is directly proportional to obliviousness”

While we will invariable go through a messy phase with tons of failures, computers tied to smart devices will eventually win out. Here’s why:

1.) Real-Time Monitoring: Rather than doing the snapshot-in-time testing that doctors do today, analyses will increasing be made through sensor networks that pull data over an extended period of time from our skin, organs, and even our brain as these tools evolve into hyper-analytical portals into our own metabolism.

2.) Larger Sampling Size: Seldom will a medical workup actually zero in on a condition’s point of origin. If you contracted a disease, got an infection, some nasty rash, or just feel lousy, where did it start? Did it start on your finger when you touched something? Or maybe it started in your lungs from breathing dirty air, or from a toothbrush, or bad food, or dirty restroom? By working with super-large sampling sizes, we will uncover far more information than we ever dreamed possible.

3.) Ability to Process Exponentially More Data: Eventually medical computers will be able to analyze and monitor over 10,000 possible conditions simultaneously over an extended period of time. This is simply beyond human capabilities.

5.) No Trip, No Waiting: If a doctor insists on seeing someone in person, very often they won’t come. But if that same person can engage in their own series of self-diagnostic exercises, it’s far more likely to happen.

6.) Cheaper: The cheaper and more accessible healthcare is, the more likely it will happen. Cost is directly proportional to obliviousness.

7.) More Accurate: Is the problem occurring because of cells one nanometer in size or 10 millimeters? Human precision is simply no match for the hyper-exactness computers can wield.

8.) More Objective: Far too many doctor decisions have been coopted by big pharma, insurance companies, and medical policies. The patient’s best interest is no longer the top priority. 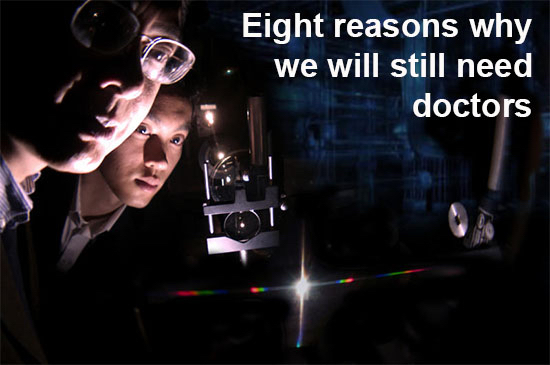 Eight reasons why we will still need doctors

Over the coming decade, medical staffers are in for a rough transition, but unlike many other professions, that doesn’t mean the need for doctors goes away.

Here’s why we will still need doctors even though many ancillary jobs will begin to disappear.

1.) Accidents: Humans are born risk-takers, and as such, not all risks turn out well. Whenever an accident occurs, it produces a one-of-a-kind condition only marginally similar to other disasters. Accidents also create a boatload of emotional, psychological, and relationship issues that require human contact and human attention.

2.) Anomalies and Edge Cases: No matter how far we push our technical ability, there will still be things that fall outside of the norm.

3.) New Diseases: The disease universe continues to evolve. Only a couple decades ago we didn’t know about mad cow disease, bird flu, or golfer’s foot. These conditions have only recently cropped up, and in the future there will be many more.

4.) The Human Touch: Too often people are faced with critical life and death decisions and need to understand the options. While it may be possible for a computer to spit out the cold, hard choices, this is really a situation where people need a real person to interact with.

5.) Research: The human condition is constantly evolving and our relationship with the world around us continues to change. As a result, there will continually be a need for further research, and doctors will find a welcome home for their talent.

6.) Oversight: While computers will serve as a more accurate replacement for fallible humans, that doesn’t mean we won’t encounter fallible computers. Every line of code has its own idiosyncrasies and biases, requiring a technical checks and balance system to audit their performance.

7.) Constant Updating: Human biology is not a static science, and as a result, every condition, reaction, and assumption will need to be constantly updated as new information surfaces.

8.) Pushing the Limits: Computers won’t color outside the lines unless we tell them to. We live in a human-based world dealing with human-based problems, and sometimes this requires unusual levels of creativity, abnormal thinking, and gut instincts.

“Technology will replace 80% of what doctors do” – Vinod Khosla

In 2012, Vinod Khosla, famed venture capitalist and co-founder of Sun Microsystems, made the bold proclamation that “Technology will replace 80% of what doctors do.”

He made the controversial remarks at the Health Innovation Summit in San Francisco, hosted by seed accelerator Rock Health.

Continuing on he said, “Healthcare today is often really the ‘practice of medicine’ rather than the ‘science of medicine.’”

To make his point, he pointed out:

Khosla said that machines, driven by large data sets and computations power, not only will be cheaper, more accurate and objective, but better than the average doctor. To get there, the level of machine expertise will need to be in the 80th percentile of doctors’ expertise.

So how long before this transition occurs?

Healthcare is an industry involving complicated politics, irrational decisions, and legions of people looking for their next paycheck. But the sheer volume of money in the system is making it a prime target of entrepreneurs all over the world.

One of the primary drivers, the Affordable Care Act, is already creating openings, and many changes have already begun. Within ten years we will see a radically different healthcare system begin to emerge, but it will take longer for the technology to mature.

We’re in for a wild ride.