How Long before a Driverless Car Wins the Indianapolis 500? 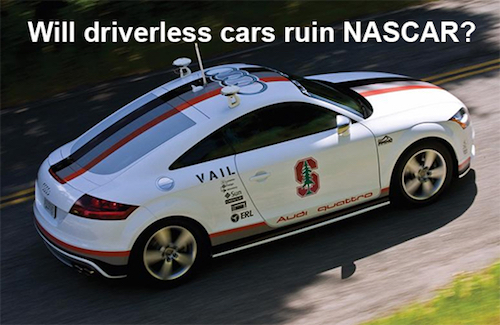 In 1997, IBM staged a history-making competition between World Chess Champion Gary Kasparov and their own chess-playing computer, Deep Blue.

The tally for these two major competitions stands at Computers–2, Humans-0.

So, at least in my way of thinking, the next logical competition should be to pit a self-driving computer against the world’s best racecar drivers. It may not be the actual Indianapolis 500, but rather a staged competition, maybe Google or Tesla Vs. 2-3 of the top Nascar car drivers?

Is this a contest that will happen in the next 5 years?

The answer has many moving parts and far more at stake than simply winning or losing. So open the door and climb in. Let’s take a journey into our driverless future and see what really makes sense. 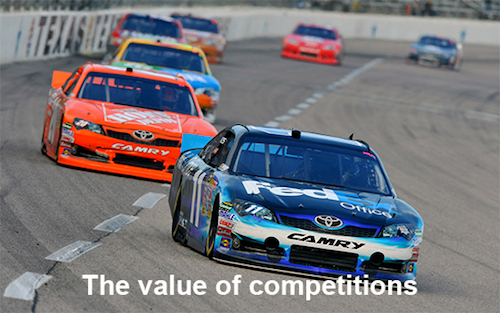 The Value of Competitions

Prizes have been used throughout history to spur innovation, with one of the more notable examples being the 1714 prize offered by the British Parliament for reducing shipwrecks by creating a precise method for determining a ship’s longitude. This resulted in John Harrison’s invention of the chronometer.

Much later, in 1919, Raymond Orteig, a New York hotelier, announced a $25,000 prize for the first person to fly nonstop between New York and Paris. Eight years later, Charles Lindbergh won that prize, opening the door to transoceanic air travel.

However, competitions like these seemed resigned to the history books until Dr. Peter Diamandis, founder of the X-Prize Foundation, revived the concept in 1996 by launching the Ansari X Prize, a space competition with a $10 million prize for the first non-government organization to launch a reusable manned spacecraft into space twice within two weeks. The prize was won on October 4, 2004, the 47th anniversary of the Sputnik 1 launch, by Tier One. The spacecraft, dubbed SpaceShipOne, was designed by Burt Rutan and financed by Microsoft co-founder Paul Allen.

With the X-Prize Foundation’s headline-making success story, prizes were reborn as a powerful new tool for science and industry, and tens of thousands of new competitions came out of the woodwork vying for the public’s attention.

Wealthy philanthropists began to consider competitions as a more effective way of leveraging their donations, which has given rise to a new branch of the contest space, “prize philanthropy.”

An example of this is the recent “Breakthrough Prize in Life Sciences” established by tech giants Yuri Milner, Sergey Brin, Anne Wojciciki, and Mark Zuckerburg. This newly created philanthropic prize was been awarded to 11 scientists doing innovative research. At $3 million for each scientist, the award is more than twice the amount of each Nobel Prize.

As a way of researching this topic, I posed the question to four of my fellow futurists and got some insightful perspectives on what effect a competition like this would have both on the sport of auto racing as well as the changing state of the human condition.

1.) Kenneth W. Harris is the Chairman of The Consilience Group and Managing Editor–TechCast.org.

According to Ken, “an automatic car race against a car driven by a NASCAR driver could happen in the next 5 years. I think the technology is already available or soon will be.

Sports TV is a huge moneymaker and the TV networks are always in the market for new sports content that one or more of them might promote such an event or series of events.”

2.) Paul Graham Raven is a freelance writer and academic researcher with the University of Sheffield’s Pennine Water Group. Paul has a fascinating way of getting to the heart of the matter:

First things first: this is not a harbinger of imminent techno-transcendence. Driving a car, much like piloting a plane — which computers have been doing almost flawlessly for decades, now, to the extent that most pilots are paid very generously to act as a back-up should the automatic pilot malfunction — is not a suitable yardstick for the successful modeling of human-like cognition; on the contrary, the interesting thing about both tasks is how much better suited they are to a bespoke control system than to the easily-distracted emergent system that is human consciousness. Ditto Deep Blue and Watson.

… human attention being automated out of a commonplace machine-operation task by the deployment of networked IT — is so paradigmatic to be banal. So it says nothing new about the techno-economic dimension of the state of humanity… but in doing so it underscores our inability to see the diminishing forest for the neatly-sawn logs we’ve made of the trees.

An all-robot race would, I imagine, rapidly become even more over-optimized than the human contests already are, to the extent that circumstance and “luck” would be the only determining factors of victory. Few would bother watching those races.”

3.) Dr. Cindy Frewen Wuellner is an Adjunct Professor at the University of Houston Futures Studies Department, Editor of Urbanverse, and Architect & Owner at Frewen Architects Inc.

“The human element of uncertainty is truly the holy grail in the singularity dream. Nascar fans just wait for the crash. Will there be an optimization of crashes by the driverless car? Will a race with more promised crashes, more aggressive cars be the next revenue generator? Only when humans are completely removed from the track. In other words it is just a video game with a physical manifestation. What’s fun about that?

Once we are done marveling at the invention, who will be the hero in the winner’s circle?

Sports has to remain a test of human endurance. Here’s a case where the sport is a machine/human hybrid. What percentage of human involvement retains the credibility of the game? In this case, complete replacement makes the sport obsolete.”

4.) Lloyd Walker is the President of Precurve LLC and is on the faculty of the Art Center College of Design.

“In my opinion, it won’t happen in 5 years, not because the tech won’t exist to allow it, but because the professional race car drivers who make tens of $millions/year, their sponsors, and the huge industry that is spectator car racing has very little to gain from a machine vs. human race and everything to lose.

Tech in the top level of racing is already highly regulated so that the human is still critical path in the loop. If not, robot cars would already be winning. There are many limits on all kinds of allowable tech because machine assistance creates so many advantages. A self-driving car with full track awareness deploying a full spectrum of performance features would smoke human drivers in 5 years. A robotic F1 car is arguably easier to do than a jeopardy-bot. The track is a closed system with known physics on a very limited set of performance parameters. So the robot would need to be highly constrained to create a fair handicap. A robotic race car, using real time data feeds of conditions and driver performance from around the track, external of its own POV and on top of its highly accurate onboard track model, would have too large an advantage. How much computing power would be allowed? How many networked track sensors and data feeds from outside the car could be allowed? Could the car’s algorithm include any historical psychological profile of human competitors? What about real-time sensing of human driver emotions or physiological conditions. Would human technicians be allowed to update routines during the race? A robotic car is ultimately a networked device, as is a professional driver/car and support team. But a human driver’s ability to consume new data from his advisors or network while driving is orders of magnitude less than a robot driver. It is external sensors, data bandwidth, computing speed, and precision that makes robot cars on the road attractive – and inevitable. Artificially handicapping those things in a race wouldn’t be a full demonstration of the capability.

I can certainly imagine Google or Tesla staging demonstration races to show that their self-driving cars can beat humans or beat historical track times within 5 years. But it seems economically and egotistically unattractive for top human race drivers to engage in such a showdown.” 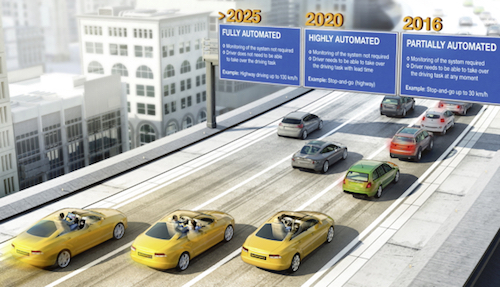 What Effect will Driverless Cars Have on the Auto Industry?

The driverless car market will evolve dramatically over the next couple decades.

The first generation of cars will be privately owned and operated. They will grow from part-time driverless, under a designated speed and only during certain conditions, to completely driverless sleep-in-the-back-seat-while-traveling, autonomous vehicles.

Later generations will shift towards on-demand vehicles that can be summoned whenever needed. Smartphone apps will enable people to hail a car even more easily than taxis today. Car ownership will plummet, but overall transportation will improve dramatically.

Once people no longer own a personal vehicle, their attitudes about them will begin to shift. In much the same way we care little about whether our plane is made by Boeing or Airbus, people will care little about the brand of car, the tires it rides on, or the kind of fuel it uses. Certainly fleet operators will care a great deal about these issues, but the riding public will shift their attention to more personal matters.

Instead, people will be more concerned about rider options such as whether it’s a private or carpool vehicle, space for shopping bags, cleanliness, and general levels of comfort. Also, high on their priority list will be the speed with which it can cross a city.

Driverless cars will start as a luxury item, but will quickly transition into a common form of transportation. Eventually governments will pass laws making driverless vehicles mandatory on all major thoroughfares. Once the human variable is eliminated, overall efficiencies will climb dramatically.

The point of a competition like this will be to publicly demonstrate driverless cars are both super-fast and super-safe.

Keep in mind that staged competitions like this are a form of marketing. It’s an entertaining event designed to capture the whole world’s attention for the purpose of conveying a certain message.

The competition is never intended to destroy a sport or somehow wreck a piece of the entertainment industry. Chess tournaments are still happening and Jeopardy is still a money-making TV game show. Rather, it’s to prove a point. IBM used it very effectively to prove they are the industry leaders in the area of human-thinking computers.

At the same time, I think IBM got it wrong. With both the 1997 and 2011 events, the event was staged, the computer won, and everyone went back to business as usual. When savvy marketing people are involved, the one-and-done approach leaves tons of opportunity still on the table.

If IBM had lost the first 2-3 rounds of the competition, they could have done a far better job of milking public sympathy and, in the end, it would have seemed like a far greater accomplishment.

In their current state, driverless cars suffer from low consumer confidence and credibility. A well-planned competition could both assure the public that driverless cars are indeed safe, and even raise the bar of expectations, showing they can be safe at over 200 mph.

So will a competition like this happen during the next 5 years?

I’ll go out on a limb here and say yes. Not only do I think it’ll happen, but I plan to be in attendance when it does.