Invasion of the Digital Body Cloud 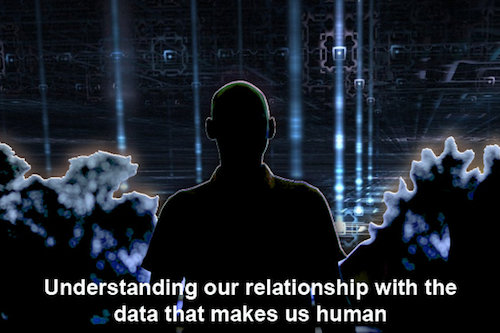 Imagine walking up to a building and having it recognize you. Not only does it recognize you, but it also makes changes in temperature, lighting, and music to make you feel like you’re at home.

Maybe it’s not a building, but a car, a bicycle, pair of shoes, or a pillow? And each of these objects will somehow adjust themselves to match your body size and shape, and somehow sync up with your needs and personality.

Going a step further, what if the objects around us had more than an ability to make one-time adjustments? What if they could learn from us and grow in their understanding of us over time?

If you think what I’ve described is a long time off, think again. The scenario I just described will soon become a common occurrence because of the interplay between three converging forces – Wireless Body Area Network (WBAN) technology, cloud computing, and the processing power of smartphones.

Wearable and implantable sensors are already making serious inroads, and once combined with smartphones and private clouds, we’ll begin to see an entirely new style of living emerge. (Pics and Charts)

About the same time I was leaving IBM in the early 1990s, another IBM researcher, Thomas Zimmerman, was making major inroads into Personal Area Network (PAN) technology. While much of the human body’s internal electrical system remains something of a mystery, Zimmerman began researching the use of the body’s external wiring for use with sensors and other devices.

Working with MIT Professor Neil Gershenfeld at the MIT Media Lab, Zimmerman devised ways to send data through the human body for some rather groundbreaking applications including the exchange of electronic business cards with a handshake and preventing air bags from injuring children in the Honda Accord.

By adding wireless to the equation, PAN technology became WPAN. Later around 2001, this application of WPAN was renamed as the wireless body area network (WBAN) to represent the communications on, in and near the body.

In the future, WBAN will enable inexpensive and continuous health monitoring with real-time updates to medical records through the Internet. A number of intelligent physiological sensors are already being integrated into wearable vests, clothing, and jewelry for early detection of medical conditions.

The processing power of smartphones is still a bottleneck in developing the true potential for wearable tech.

Average processing power has been on a continuous growth curve for PCs over the past 25 years, with Moore’s Law holding steady as processing doubles every 18 months. This growth is being further accelerated by the adoption of multicore processors.

In addition to PCs, we now see an increase in processing power on smartphones, Internet-connected televisions, and tablets. This is driving the mobile computing boom and enabling much richer experiences on these screens, with typical processor speeds over 1GHz. Even so, the processing power across these screens is comparable to what the personal computer experience was about seven years ago.

While mobile computing power increases, we will continue to have an ongoing processing power gap between PCs on the one hand, and smartphones, TVs, and tablets on the other.

This creates a challenge for anyone building digital experiences, as they will attempt to deliver effective experiences to mobile devices.

The number of linked sensors, cameras, and complex peripheral devices will soon be exploding around us, and we will see efforts to link this information into a cohesive intelligence layers that we can interact with in our daily lives.

As you might imagine, attempts to improve our sphere of knowability for purposes of convenience will be challenged with serious resistance from those wishing to maintain our privacy. These will be tough decisions to wrestle through and the resulting public policy decisions will have far-reaching implications.

The field of wearable technology and sensors is growing rapidly. Here are a few recent examples of how this field is changing. 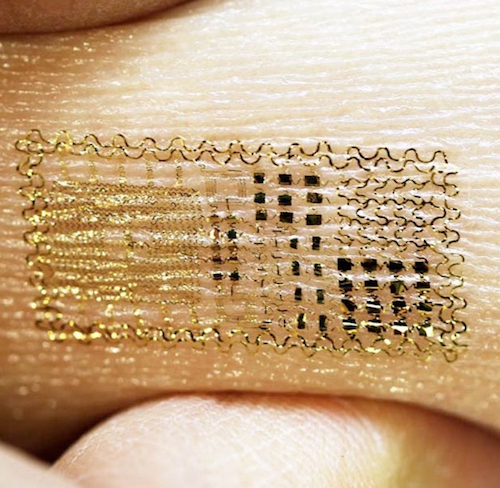 Band-Aid-like circuits created at University of Illinois are flexible enough to be worn on human skin.

The Smart Skin’s electronic circuit is first mounted on a super-thin sheet of soluble plastic and laminated onto the skin with water, much like a temporary tattoo. Once it’s on, it can bend, wrinkle and stretch along with a wearer’s skin — it doesn’t pop off or snap, which is no small feat considering this is a sophisticated semiconductor.

When it’s no longer needed, it peels off like a layer of sunburned skin.

Singapore’s Touch-Hear system uses finger implants so readers can gain additional information about a word they’re confused with. By touching a word or phrase. the reader can listen to its proper pronunciation, or find its translation or definition. 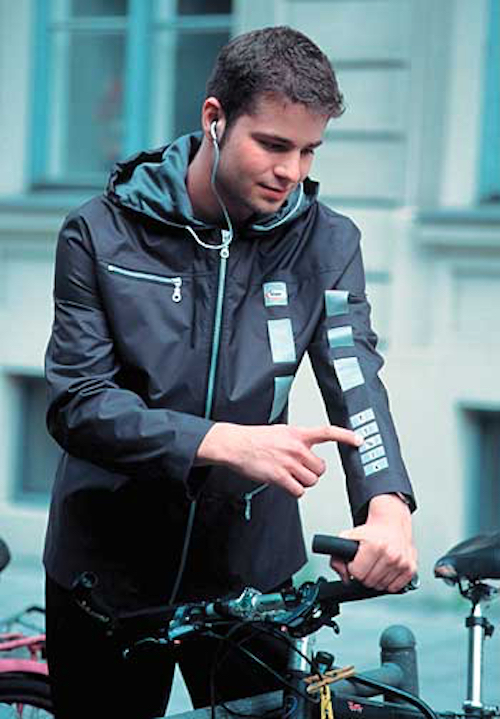 WeatherMood is a personal weather armband worn on a jacket. People can use it to “feel” the weather at a certain location, or adjust the display of their weather settings to reflect their present mood.

Thimble is a wearable finger glove that gives the visually impaired access to ambient as well as surrounding information. 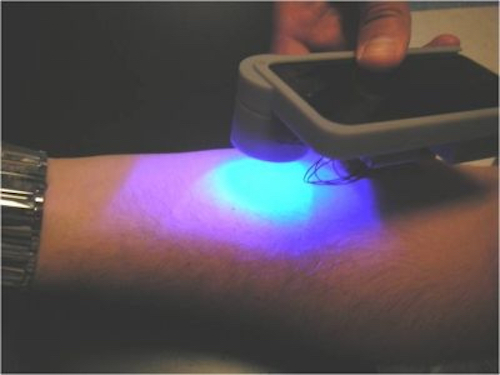 Diabetics who hate their daily blood test will soon have another option. A team of scientists at MIT have created a new iPhone glucose monitor that can test blood glucose levels by illuminating an otherwise invisible “nano tattoo.”

We are currently witnessing a major transformation from desktop to mobile right now. Below is a chart from a recent Morgan Stanley report, showing that desktop connections to the Internet are continuing to increase. Even so, in the next three or four years mobile computing will soon exceed desktop computing on the Internet.

All of these changes together represent a far bigger shift in computing than the personal computer revolution.

With over 5 billion people already using cellphones around the globe, over the next ten years, today’s 400 million smartphones will grow to become 5 billion.

The market for cloud computing services is large and growing, even if the forecasts vary widely. Here are a few recent statistics:

Both mobile and social computing are growing faster than anything before in the history of technology, and enterprise applications will need to adapt.

The key drivers behind this trend is the convergence of WBAN technology, cloud computing, and the processing power of smartphones

Phones have transitioned from landlines, to mobile phones, to smartphones, and they are about to undergo another revolution. They have already shifted from devices designed for phone calls to computers that connect us to the web, but in the years ahead, they will also enable people to capture physical and analog data about the world both “on” them and “around” them and transfer it to the web.

Over time we will be developing predictive models that anticipate our physical problems and recommend counter measures.

We will soon wear our digital body cloud like a piece of protective clothing where the information is used to enhance our performance, ward off potential problems, and improve our overall awareness of our surroundings

Yes, we are on the verge of being invaded. But we won’t mind. In fact, I for one will be going out of my way to encourage it.

Invasion of the Digital Body Cloud