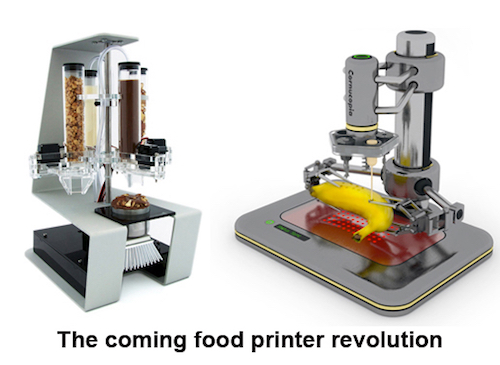 Would you buy a product that was advertised as “Naturally grown, completely organic, printed food?”

Anyone who has an apple tree growing in their yard knows how difficult it is to grow one that is worthy of eating straight off the tree. Most have bruises, wormholes, or bird damage that leaves most apples somewhat marginalized. They may be perfectly good on the inside, yet they don’t look very good.

As we shop for apples in the grocery store, we find ourselves looking for the “perfect apple.” Only a small percentage of apples grown on the farm are worthy of making it into the major leagues of food – the fresh produce section of our grocery stores.

But what if we could take all of those bruised and damaged apples and turn them all into “perfect apples” – perfect size, perfect color, perfect crunch when we bite into them, and the perfect sweet juicy flavor and aroma that makes our mouth water every time we think about them.

This is the promise of food printer technology as we move from simply printing ink on paper, to 3D printing of parts and objects, to next generation food printers.

These aren’t the artificial food devices that science fiction movies have been promising. Instead, they are devices with the very real potential for turning real apples into perfect apples. But this is only scratching the surface.

What if it were possible for you to “print” a perfectly shaped spoon, shaped specifically to fit your mouth with a handle shaped to fit your hand?

What if it were possible to print a full plate of your favorite food that filled you up, yet was perfectly aligned with the number of calories and nutrition your body demanded to stay in optimal health?

What if it were possible to first print the can and then the soup that went into it? Or from a different perspective, what if you were able to print the bottle, and then the wine and cork that goes into it?

If these ideas sound farfetched today, they certainly won’t in a couple years as we learn the fine art of taking real food and turning it into amazingly transformed printed food.

3D printing is a object creation technology where the shape of the objects are formed through a process of building up layers of material until all of the details are in place – a relatively slow process requiring several hours to complete.

The first commercial 3D printer was invented by Charles Hull in 1984, based on a technique called stereolithography.

Stereolithographic 3D printers formed objects on a perforated platform that was immersed in a vat of liquid photocurable polymer. Starting with the platform barely below the surface, a UV laser is beamed onto a very thin layer of photopolymer causing it to harden. As one layer is formed, the platform is lowered so the next layer can be traced out and hardened by the laser. Layer by layer, material is hardened by the laser until a complete object has been printed and can be removed from the vat of photopolymer. Stereolithographic printers remain one of the most accurate types of hardware for fabricating 3D objects.

Since the first stereolithographic (SLA) technology came into existence, a number of related technologies have emerged giving the fledgling new industry a number of new options. These include:

Clearly this is an industry hung up on three letter acronyms. Over the coming years expect to see dozens of new technologies to appear.

Three-dimensional printing makes it as cheap to create single items as it is to produce thousands of items and thus undermines economies of scale. It may have as profound an impact on the world as the coming of the factory did during the Henry Ford era.

Tissue engineers are now “printing” new body parts, from intestines to tracheas — but progress on larger organs has been slow. This is mainly because tissues need nutrients to stay alive, and they need blood vessels to deliver those nutrients. It’s difficult to build those vascular networks, but now a team from Germany’s Fraunhofer Institute for Interfacial Engineering and Biotechnology IGB has developed a way to print capillaries with a 3-D printer.

The Open3DP team at the University of Washington has managed to accomplish something extraordinary. They have figured out a way to successfully print artificial bones with a 3D printer. The primary challenge was coming up with a strong, biologically resilient material that will hold up over the long run.

Food is a basic building block of life. We have a hard time going longer than a day without it.

The food we eat has become a key part of our culture, our entertainment, and our physical health. In fact, food touches virtually everything we do, yet we are cooking less and growing more and more dependent on others for the food we eat.

Marcelo Coelho and Amit Zoran, a couple ingenious minds at MIT working on the Cornucopias Project, have created a very visual way for us to imagine next generation food that will come from printers.

Each design addresses a fundamental process that lies at the heart of cooking, namely the mixing of ingredients; the physical and chemical transformation of these ingredients into new compounds; and finally their modeling into aesthetically pleasing and delectable textures and shapes.

At MIT, Amit Zoran has developed a series of digital devices that may one day be use to produce the food we eat. The virtuoso mixer, the robotic chef and the digital fabricator all aim to bring the tools we use to make food up to date with digital technology. 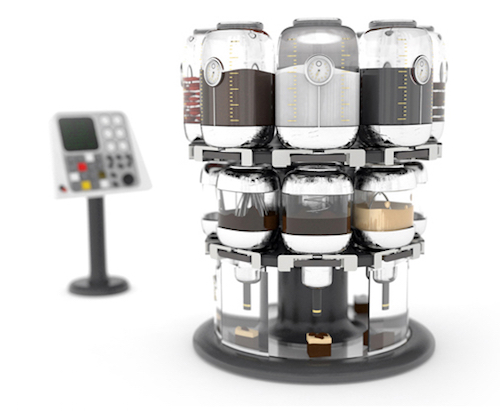 The virtuoso mixer addresses the mixing of ingredients, the robotic chef handles the physical and chemical transformation of these ingredients into new compounds and the digital fabricator helps turn these creations into aesthetically pleasing meals.

Users simply store ingredients in their kitchen, mix them together using these devices and then print them out onto serving trays. 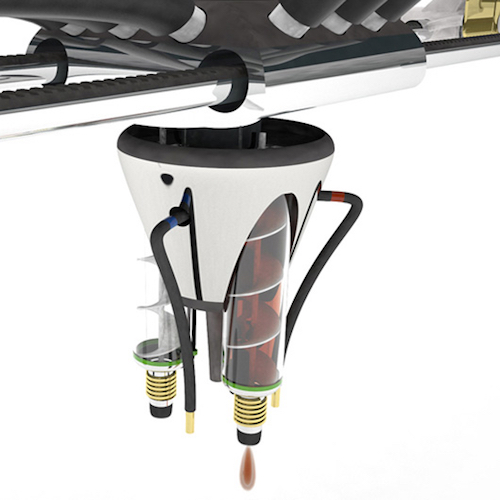 Cornucopias’ printing process begins with an array of food canisters filled with the “cook’s” foods of choice. After a meal selection has been made using the device’s multi-touch translucent screen, users are able to see their meal being assembled while simultaneously manipulating real-time parameters, such as calories or carbohydrate content. Each ingredient is then piped into a mixer and then very precisely extruded, allowing for very exact and elaborate combinations of food.

Philips “Food Creation” device has been inspired by the so-called ‘molecular gastronomists.’ These are chefs who deconstruct food and then reassemble it in completely different ways. The food printer works with various edible ingredients and then combine and ‘print’ them in the desired shape and consistency.

James King’s “Dressing the Meat of Tomorrow,” is a project that examines how we can best design in-vitro meat and other artificial foods of the future in order to remind ourselves what they are and where they came from.

The brilliant thinkers at Yanko Design have developed a new device called the Electrolux Moléculaire, a 3D molecular food printer that relies on the experimental molecular cooking technology.

The Moléculaire is based on the same layer-by-layer printing technique that arranges small particles from a set of ingredients. Within minutes, it prints out three-dimensional desserts, complex structures, shapes for molecular dishes, and patterns for decorating a meal.

According to Yanko Design, you “simply insert a blister pack into the reservoir, place Moléculaire on top of a plate, and press the start button. Users can also create their own recipes with special software and their own ingredients. Ambitious users can download recipes and share them with other users in an online community.”

While digital media has transformed nearly every other facet of society, the fundamental technologies we use to prepare meals today is only an incremental improvement over the tools we have been using for hundreds of years. In order for us to move cooking technologies into the digital age, we will need to reimagine the entire process of getting food from the farm to the dinner table.

In the future, we will only be consuming food that our body has a positive reaction to.

As an example, people in the future will be able to order a “13.2% fat cheeseburger with 2.7 grams of potassium and 3.6 grams of calcium, coupled with a hint of almond and banana flavoring, on a sesame seed bun with exactly 47 sesame seeds on it.” And they will be able to do this simply by ordering a cheeseburger and our personal information cloud will handle the details.

One key question remains. Will the primary food-stock differentiators be grown into the food, or will they simply be added as a step in the food processing line? My guess is that it will be a combination of both. 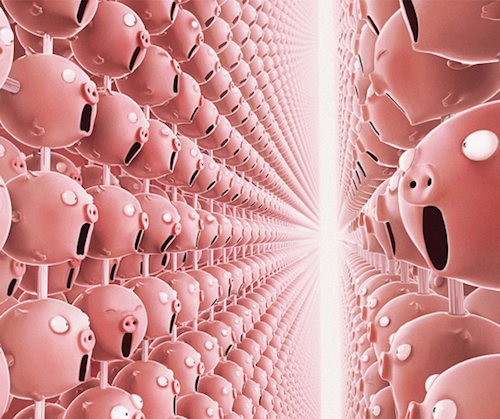 There is no such thing as a “pork molecule”

The labels we use today to describe our diets, labels such as vegetarian, Kosher, glucose free, vegan, and lactose intolerant, will be replaced with new terminology as we determine, on a molecular level, which foods our body has a positive reaction to.

So, in the future, will you be asking your spouse to go to the store and pick up a new kiwi and eggplant cartridge so you can print dinner tonight?

Those days may be coming sooner than you think.