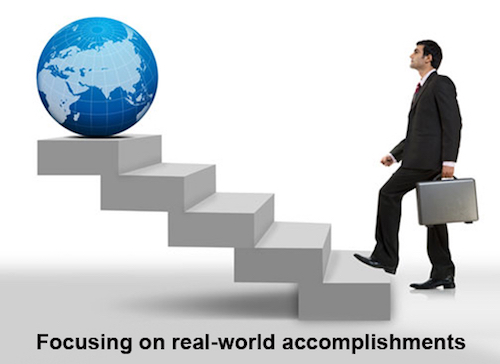 Today, our best and brightest are drawn to elite colleges like Harvard, Princeton, MIT, Stanford, and Yale. As they attend these institutions they are surrounded by some of the most talented people in the world.

Yet, despite having all the cards aligned in their favor, and being presented with one huge opportunity after another, many of these people fail. They fail at their jobs, fail in their businesses, and fail to live up to their full potential.

So what if a new kind of proving ground were created, an anti-academic college of sorts, where graduation was predicated on success? Where success wasn’t defined as academic success, but as real-world accomplishments.

And what if this new institution not only attracted the best and the brightest, but also the most determined and driven? And what if this organization completely rewrote the rules of academia and created an entirely new rung on the ladder of success?

That is exactly what could happen with accomplishment-based education. Allow me to explain further.

Symbols of Achievement Vs. Actual Accomplishments

Writing a book, receiving a patent, or starting a business are all symbols of achievement in today’s world. But being the author of a book that sells 10,000 copies, or inventing a product that 100,000 people buy, or building a business that grosses over $1 million in annual sales are all significant accomplishments that are far more meaningful than their symbolic starting points.

Much of what happens in today’s colleges and universities is based on “symbols of achievement,” not actual accomplishments.

A student that enters a classroom will typically find themselves immersed in a academic competition, a competition that pits students against each other to produce results that best match the teacher’s expectations. Only rarely will the work product of a student in a classroom rise to any notable level of significance.

Rest assured, I’m not about to say that classroom training has no value. However, accomplishments in a classroom are at least one level of abstraction removed from a real-world application. Few employers would be willing to pay for the activities that take place in most classrooms.

So the question we should be asking is, “How can we transition college-based education from merely producing symbols of achievement to actual real-world accomplishments?”

Since colleges are beginning to shift towards online education, we can find some interesting parallels between today’s gaming environments and real-world situations.

In much the same way a gamer can become very adept at fighting a simulated battle, it can only partially compare to a real-life battle. Even in a closely comparable situation where a gamer shifts from flying a simulated drone to a real-life drone in the military, many changes will occur. Suddenly the consequences of their action become something real and tangible, and what used to be simulated pain and suffering instantly becomes real pain and suffering.

The emotional context is something they begin to feel throughout their entire body.

US Major Bryan Callahan is an Air Force pilot flying remote controlled drones known as RPAs. His work involved flying RPA missions over Afghanistan. In a 2010 interview with Germany’s Spiegel, he described it this way:

“…It sounds strange but being far away and safe is kind of a bummer. The other guys are exposing themselves, and that to me is still quite an honorable thing to do. So I feel like I’m cheating them. I’m relatively safe. If I screw up or miss something, if I screw up a shot, I wish it was me down there, not them. Sometimes I feel like I left them behind.”

“…you can’t just roll your unmanned plane over and look out the window. I have to use all these very external cues, sometime we’re literally using a map with pins, on the computer. In an F-16 I can use my eyeballs, I can build what we call situational awareness in two seconds flat. I have the ability to strike a target quickly.”

“…Killing someone with an RPA is not any different than with an F-15. It’s easy to think that, to fall down that trap. We’re well aware that if you push that button somebody can go away. It’s not a video game. You take it very seriously. It’s by far nowhere near a video game.”

The Anatomy of and Accomplishment

The word “accomplishment” is a loosely defined term used to describe everything from a 4th grader’s piano recital to achieving peace between warring nations. For this reason it’s important to draw a distinction between a vague accomplishment and a real one.

What exactly constitutes a “real-life accomplishment” and how does it differ from what I labeled earlier as “symbols of achievement?”

An accomplishment-based education system is one where the output of every student has tangible, demonstrable value to others.

I will be the first to admit that everyone needs time to learn their profession, and making mistakes will help them improve along the way. But the global marketplace is not looking for people who have learned how to be great students. It wants results.

When a student immerses himself or herself in a specific topic, they begin to learn the vocabulary, learn about significant pieces of research, and the foundational principals that make it important. In short, they begin to get an inkling of how people in that industry think, talk, and communicate.

But that’s not enough. They need to know what it feels like to produce something of tangible value.

Here are three brief examples of how an accomplishment-based education system might be structured and the profound implications it would have on society.

1. Master of Social Marketing & Sales – Many people have figured out how to create their own impressive social network with tens of thousands of friends and followers on sites like LinkedIn, Facebook, Twitter, and YouTube. This program is designed to leverage a person’s social influence and create measurable results.

Criteria for Graduation: To graduate, each student will need to demonstrate a social network that includes over 100,000 people around the world, have an online video that has gone viral with over 250,000 views, work with 10 products that each can be found within the top 10 search results on a major search engine, create an engaged user community with over 10,000 online product mentions and over $50,000 in product sales per month for six months in a row.

2. Master of Entrepreneurship – Starting a business is easy, but turning it into a sustainable enterprise requires a combination of skills, processes, and talent capable of generating continuous revenue streams while still overcoming the challenges and adversities commonly inherent in this type of undertaking.

Criteria for Graduation: To graduate, each student will need to demonstrate a sustainable business operation with at least five unusual competitive advantages, 10 definable market differentiators, over 100 separate sales cycles, and over $1 million in annual sales over a 12 month period of time.

3. Master of Free-Agency – Free Agents are freelancers who work on a variety of projects. To be successful, free agents need to position themselves as experts in a specific field and begin to form business relationships with key individuals who routinely hire outside talent.

Criteria for Graduation: To graduate, each student will need to demonstrate a definable market niche that closely aligns with their own personal expertise, work with at least five clients per month generating at minimum of $25,000 every month for 12 months straight.

Naturally, the examples I’m using here will need to be expanded, refined, and explained in far more detail. This type of master-level certification will have profound implications

Attending an Ivy League college is a significant status symbol for young people today. But what if there were an even better status symbol?

What if the students in this institution were surrounded and mentored by other highly accomplished people, each of whom had achieved their own Master-Level Certification? And what if this type of learning could be achieved in less than two years for a fraction of what today’s colleges cost?

Envision, if you will, a group of 20 students entering a classroom sometime in the future. After a brief orientation period and a little time spent getting to know each other, each student is given the option of choosing a project to complete from a list of ten possible projects. Each of these course-projects is designed around a mobile app that drives students towards a specific accomplishment.

Over a period of time, students will be tasked with completing the assignment they have chosen, and once their “accomplishment” has been completed, they can move on to their next course. Their interaction with other students would be on an informal basis, and teachers would serve more as coaches than traditional instructors.

Their accomplishments would range from online activities such as building a website with a specific feature set, to launching a blog site with a specified number of entries, to creating a database with designated properties for interaction.

All of these activities would be carefully orchestrated to drive students towards a specific end goal.

Is this type of institution a real possibility? My prediction is that it is not only feasible, but someone will attempt to create it within the next couple years.