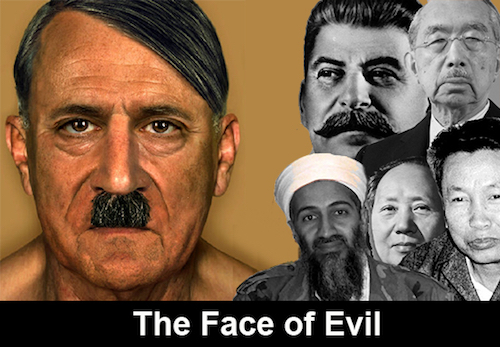 Would the world be a better place if Adolph Hitler never existed?

While many people will argue over who exactly was the worst of the worst, with names like Pol Pot, Josef Stalin, Idi Amin, Ivan the Terrible, Genghis Khan, Nero, Osama bin Laden, Attila the Hun, and Hirohito entering the conversation, it’s easy to attribute a face to the evil we all despise.

But when we take a more philosophical approach and ask what the world would have looked like if our own poster child for evil had never existed, we begin seeing human progress in a whole new light.

Rest assured, I’m not a fan of Hitler or any of the other psychopaths who’ve splattered blood over the pages of history. But evil does play an important role, and often times, a positive one.

As an example, some of our biggest advancements in science and industry happened during World War II when our backs were up against a wall and the word “deadline” actually referred to the time when more people would die.

Similarly, many drawings from DaVinci and Archimedes were dedicated to creating better war machines, which also gave us much of our foundational thinking for advancing mathematics, physics, medicine, and engineering.

Our ongoing struggles with evil are never ending, and it’s up to us to stop it wherever and whenever possible. And it may be ludicrous to think we’ll ever be in danger of having “too little” evil. But knowing that we are driven by adversity, and that hardship and difficulty often brings out the best in us, is it reasonable to think there may be ways to actually “optimize evil?”

For most of us, we find ways to distance ourselves from all the terrible things happening in the world. The inner voice in our heads is telling us things like: “They shouldn’t have lived is such a crappy neighborhood,” or “if they’d raised their kid right, he wouldn’t have joined that gang,” or ‘they should have never bought that gun.”

These are all pieces of the conversations floating through our heads to convince us that we’re ok and the bad stuff only happens to “those people.” After all, it’s easy to spot the bad guys on TV because they all look evil.

Naturally everything changes when the flames of evil begins to singe the hair on our own head. Our arms-length philosophy takes on a distinctly different tone. 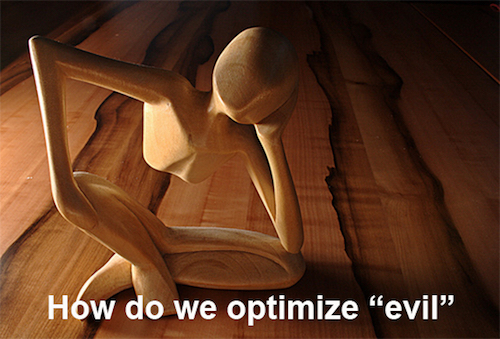 Our Need for Resistance

As humans we have an insatiable need to compete. As kids we compete for attention, we race to be first at the dinner table, and in school we compete to be smarter, better liked, better dressed, and better athletes.

Once we enter the job market we compete to become more hirable, better at getting things done, and able to leap tall buildings in a single bound.

Competition brings out the best in us and pushes us farther and faster than we are ever able to motivate ourselves.

But bad things also create a form of competition, forcing us to dig deeper and tap our inner resources to overcome adversity.

We tend to lose our focus when there’s no one to compete against, no worthy adversary.

However, too much resistance is not good either. Whenever we face overwhelming odds it tends to throw us into a tailspin.

Fifth graders don’t want to race against professional athletes and having the world chess champion playing a chess match against the world’s best golfer would make for a terrible contest.

So how do we keep “evil” sufficiently in check to serve as a worthy adversary?

One of government’s primary roles is to protect its citizens. Every country has created layers of security with guards, police, and armies to deal with any threat that may arise.

Over the past couple decades the amount of information available to these security forces has exploded exponentially, and some of our leading thinkers are presupposing what it would be like to rid society of criminals altogether.

Recent accounts of NSA’s ultra-spying capabilities show them watching and listening to conversations everywhere. Using that information and tying it to anticipatory computing systems we suddenly have Minority Report-like abilities to spot crimes before they ever happen.

Perhaps even more disturbing will be the justification for this type of system, as we hear justifications like, “we’ll actually be able to save people from themselves.”

On one hand, we probably want to prevent people from being killed. But on the other end of the spectrum, we may not want to arrest someone for stealing food because they have a starving family.

In between are thousands of grey areas requiring judgment calls.

But perhaps the bigger question we need to wrestle with is why we think we should be making any of these nuanced decisions in the first place.

So how do we draw a line in the sand and preserve the fallible nature of our humanity?

We have many examples of criminals who turned their lives around completely. If we had prevented their crimes before they were committed, they would have ended up completely different people.

Here are a few examples:

The privacy – transparency debate has no end in sight.

Just because we have the ability to gather tons of data on people, or even suspected criminals, doesn’t give us the big picture framework for interpreting it.

Our black and white justice system is ill-equipped to deal with an omni-pervasive monitoring system that could easily find something criminal in the lives of virtually every human being.

At some point in the freedom vs. protection arguments surrounding this issue, I would suggest any thoughts of ridding us of evil completely are misguided. Our attempts to prevent everything from going wrong will do exactly that, make everything go wrong.

Much like thinking we need to solve every problem, every solution brings with it entirely new problems.

That said, we should always be striving to create a better world. But we can only achieve that by finding a way to “optimize” both good and evil.

In a perfect world, some things just have to be imperfect!

“In a perfect world, some things just have to be imperfect!”