The Coming Wave of Entrepreneurship 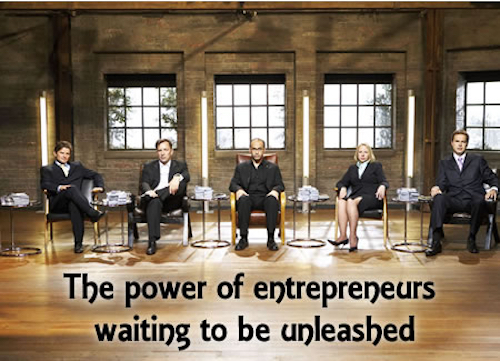 “The economy’s greatest hope may be in its aspiring entrepreneurs”

Traditionally it could be predicted that for every 100 people who join the ranks of the jobless, seven will attempt to start a business. Some find business niches, others invent and still others find a better way to do something markets are craving. Ingenuity and daring often are the catalyst for setting business and commerce in motion. Though nothing overcomes inertia like the lure of cash.

The slow trickle of business starts is about to swell into a tsunami. Legions of former auto workers, mortgage processors, school teachers and others will be forced to do something unusual and that’s hire themselves.

Overnight, an undetermined number, but assuredly greater than 7 percent, are about to become entrepreneurs and perhaps herald a new era of great wealth building. The problem: This is a nation ill-prepared to serve these burgeoning numbers.

With a dearth of funding options available to startup entrepreneurs, many of the startup ideas won’t make it past the cocktail napkin stage.

Don’t hit the panic button just yet, though. A host of new trends are coming that offer aspiring entrepreneurs new opportunities.

Trend No. 1: It is anticipated the jobless rate will rise to over 10 percent later this year and remain there for many months to come. Unemployment among blacks, Hispanics, and other minority groups will approach and possibly exceed 20 percent.

Trend No. 2: Both personal and corporate risk taking has ebbed to a new low. The recent surge in bankruptcies and foreclosures has sent many scurrying for cover. The economy’s clinging-to-life-support pallor has most of us more than a bit worried. Concern naturally has shifted to survival, with little time or tolerance to test new business models. So, creation of spin-offs and subsidiary companies are likely to be few. Investment capital is expected to be sparse.

Trend No. 3: Creation dynamic: The cost of employment is rising, placing more pressure on employees and employers. Additional taxes and other “overhead burdens” that have been passed on to the employer will translate into less hiring.

Complicating the hiring outlook further, each new employee will undergo far greater scrutiny than ever before. It then falls on employees to respond, with greater pressure to perform, a situation that will lead to more disenchantment fueling more business startups.

Trend No. 4: Mis-channeled funds: The government is funding jobs, not the job creators. Stimulus money spent on job-generating contracts will not bring the enduring returns that business growth will produce. Money channeled into startups will provide exactly the kind of economic stimulus sought by government. Success in the startup community has a rapid multiplying effect. With the accompanying effects of innovation, countless new jobs could be created.

Trend No. 5: Problem: Currently no effective systems exist for government to channel money to the startup community. The SBA is ineffective and even dysfunctional when working with startups. Without access to seed funding, the only startups likely to gain traction are low-cost and zero-cost enterprises. These mostly homebased operations will factor into the recovery, but will be skewed heavily in the direction of online businesses. Steady lasting growth will have to come from better funded micro companies.

Trend No. 6: Reason for optimism: The online digital world is an engine that requires little startup capital. Profitability for new business is often within reach of even those with little or no money. Little wonder more and more talent is shifting away from physical products toward the online marketplace.

Trend No. 7: One-person businesses are springing to life with surprising regularity. The “Empire of One” business model, which seems to be under the radar of colleges and business schools, is catching fire because of innovations that have leveled the playing field, allowing individuals to even compete with much larger companies.

Trend No. 8: The Business Colony Solution: enterprise zones and incubators for individuals. Call them hatcheries, business suites or anything else as long as support mechanisms are put in place to improve success rates of one-person and small businesses. New entrepreneurs may chafe and even balk at the stack of paperwork. Navigating a maze of bureaucratic red tape should be made easier. Enticement should be used to ignite business formation around industries expected to have unusual growth. Cities will take the lead in experimenting and supporting Business Colonies. Regardless of government involvement, colonies are bound to form around specific industry themes such as photonics, nanotechnology, online gaming, genealogy, and many more less exotic businesses. For this natural process to accelerate, though, it will take startup money.

The importance of stimulating entrepreneurship has not been lost on Asian nations. Communist Youth League of China will set up a fund to help young people establish their own businesses, as part of efforts to ease employment pressures, particularly among graduates, China.com reported in February.

According to figures from the Chinese Academy of Social Sciences, 1.5 million college graduates may have failed to secure jobs by the end of last year. A further 5.92 million new graduates will enter the job market in 2009.

Local governments are also offering favorable policies to boost employment prospects. For example, Hangzhou offers college graduates guaranteed loans of 50,000 to 200,000 yuan ($75,000 to $300,000) to help them start up their own firms.

The U.S. is the oft-cited leading nation for startups. Forbes notes that some $30 billion goes to 4,000 investments. Sounds impressive until a would-be entrepreneur strikes out seeking cash for start up in this tight-money economy.

Risk aversion seems a common and frustrating theme among nations that would like to emulate the U.S. Japan has been feeling the pressure of a decades-long recession but still has not found the magic formula to entice investment. It has found the business climate too resistant to invest in startups.

Empire of One business model

An Empire of One business is a one-person operation (though, sometimes a married couple) with far reaching spheres of influence. Typically the Empire business outsources most of its functions – information products marketed and sold online,  coaching and consulting operations, and products manufactured in China or India, sent to a distribution center in the U.S., with customers in the U.K. and Brazil. Manufacturing, marketing, bookkeeping, accounting, legal needs, and operations are all outsourced to other businesses around the world.

These are not novel concepts. The difference is mostly size. Street savvy may have once dictated asking often and asking for a lot of investment money. But this advice fit a different time. Investors and government should take another look at the one person operation that has been able to take advantage of many new tools. With the aid of software and the Internet, individuals are well equipped to serve off-shore markets and profit – with time for family, too. An acumen for leveraging talent, moving products across borders, as well as maintaining control of a vast and virtual empire will be the important measures of this group.

The Empire of One business model, too is attracting former corporate executives, who possess these skills, and wish to extricate themselves from dealing with employees.

Over 80 percent of all new startups will be created by what I am calling a lifestyle entrepreneur – people who’ve gone into business to take more control over their own lives and to build a lifestyle that suits them. Increasingly these are women, a trend the BBC notes will tip the scale of the wealthy, with female entrepreneurs representing 60 percent of the U.K.’s wealthiest by 2025.

Ironically, the driving force behind this aspect of entrepreneurship, will not be money. Health and happiness have replaced wealth as the new mantra of the mid-life professional. Fifty-seven percent of the work force now insists they will not take on extra stress associated with greater responsibility even if it means more money. But we can wager none will turn down a bigger income that comes with greater freedom and quality time.

Business will become more fluid. Talent and projects will converge for short periods of time around temporary assignments. Imitating the movie industry, where a single movie project attracts diverse workers ranging from camera operators to actors and script writers, the Empire of One will attract various independent contractors for temporary assignment. Once a project is complete, team members disband and form around new projects.

One-person operations involve numerous challenges that not all individuals are equipped to handle. Seeking support for their growing numbers, business colonies will begin to form around such diverse industrial sectors as photonics, nanotech, biotech, IT niches and many more.

Colonies also will form to support large corporate players in specific industries. As an example, companies like Sony, Microsoft and Nintendo could easily spawn gamer colonies as a way to drive the development of new games for their consoles.

Over the next few years, experimental colonies will proliferate, testing a variety of operational and support systems. Individual members of the colonies will be drawn to the prospects of steady project flow. Project leads will be attracted to the available talent pools. And host cities will be most interested in generating jobs and employment for their constituencies.

Current funding mechanisms have left a gaping hole in the availability of money for early stage startups. This is an area considered too risky for institutional money, for banks, and generally for VCs as well.

It appears very few people are interested in this level of highly speculative investment.

Since most startups involve an idea and a person, the Seed Capitalist will need to be skilled in assessing the overall quality of the initial business model as well as the caliber and capabilities of the individual.

The size of investments made by Seed Capitalist will be relatively small, most often under $100,000. For many startups, this is enough money to prove a concept and begin selling product.

Entrepreneurs have different requirements for capital, and have to be underwritten with fewer expectations of profit, and sometimes expectation of loss. High risk money is needed to support a Seed Capitalist. Yet, even with a mere 75 percent payback rate, the overall value of the companies to the national economy translates to benefit, which is jobs and money turning over in the economy. Ultimately, such a funding program would bring returns that far exceed initial losses.

In broadest terms, the benefits will be seen in the transformation of the work force to a more efficient and wealthy   generation of entrepreneurs who will grow industries and revitalize commerce.

The economy’s greatest hope may be the flourishing entrepreneurs.