The Next Bold Step in Transportation: Personal Rapid Transit Systems 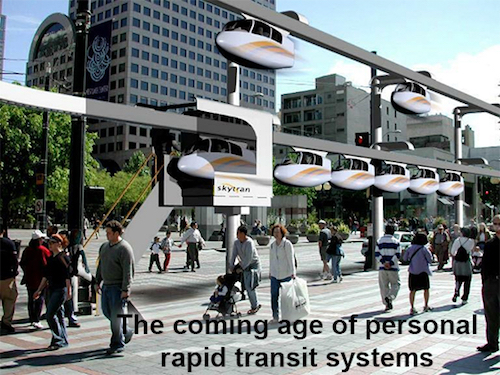 Throughout history, speed has been synonymous with greatness. In sports, those who ran the fastest were heroes. In times of war, those with the fastest chariots, ships, planes, and weapons had a significant advantage. In the business world, a company’s competitive edge has typically been formed around speed – quickest delivery, fastest transaction times, or speed of information.

With the aid of technology, we’ve found ways to speed up communications – voice, text, email, social networking, and even delivery systems. But we’ve only been able to achieve minor advances in the speed of physically traveling somewhere.

As we look closely at the advances over the past couple decades, it’s easy to see that we are on the precipices of a dramatic breakthrough in ultra high-speed transportation. Businesses are demanding it. People are demanding it. And the only things standing in our way are a few people capable of mustering the political will to make it happen.

The change we’re alluding to is the introduction of large scale Personal Rapid Transit Systems (PRTs).

The following is an explanation of what’s driving the need for PRTs and why they’re the logical next step in human and cargo transport. 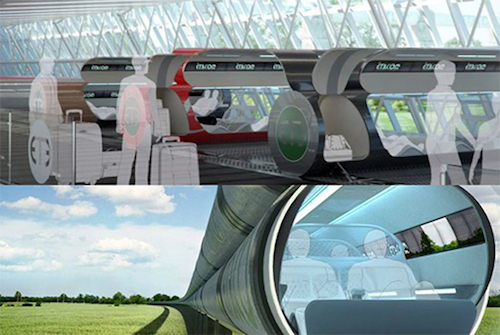 Illustrations of riding in ET3 capsules at 4,000 mph

The History of Speed

Society has been speeding up. If we look at where we’ve come from, there are two important trend lines to consider:

Since then, the time it’s taken to circumnavigate the world has shrunk dramatically. Here are a few of the records set along the way:

Compressing the time it takes to travel around the earth from 3 years to 1 hour is indeed a huge accomplishment. But sadly, the all-time human speed record was set in 1969 and hasn’t improved since.

2.) Distance Traveled Over a Lifetime

If we assume the average person in 1850 walked 4 miles a day, same as the average travel speed of the day, over a 50-year lifespan, they would have covered 73,000 miles over the course of their lifetime.

Using the same assumption, that people travel an hour a day at the average transportation speed of that era, we can begin to get a picture of how mobility is changing how we live:

* – Average speed based on Richard Florida’s calculations for the U.S. in his book titled “The Great Reset.”

** – Projection based on current trends.

Even though these numbers are rough estimates based on travel by people in the U.S., every country in the world has seen their mobility progressing along a similar growth curve.

To be sure, people who travel 7.4 million miles in their lifetime will have radically different ways of thinking about their life, their work, and future opportunities than someone who only traveled 73,000 miles.

If we follow this trend line, our average transportation speeds by 2050 should be between 225-250 mph. So how do we get there?

Yes, high-speed train systems can go faster than this, but just barely. Planes can also go faster but they top out at 550-600 mph. So what comes next? 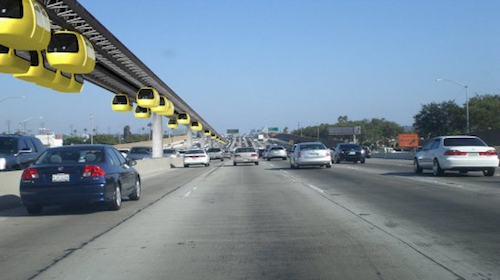 People are traveling more but our airports are getting congested, our highways are overcrowded, and our oceans and skies are becoming far too polluted for more of the same.

For these reasons, the stage has been set for something bold and exciting to emerge.

To better understand how this is likely to unfold, let’s take a look at the four top innovators who are driving the conversation:

1.) Elon Musk – Hyperloop: While easily the best known of the group and certainly the most accomplished, serving as CEO for both Space X and Tesla Motors, Elon Musk has proposed a system he calls Hyperloop. The Hyperloop system is a concept for high-speed tube transportation where pressurized capsules ride on a cushion of air inside of reduced-pressure tubes, powered by a combination of linear induction motors and air compressors. Speeds of up to 760 mph may be possible with this approach. While initially conceived as larger scale vehicles with over 20 passengers, smaller PRT cars could still be added to the mix.

2.) Jerry Sanders, CEO of Skytran: Skytran is a personal rapid transit system that allows up to two passengers inside a well-spaced pod. The pods are accelerated via linear electric motors on an elevated maglev track. Because there are no moving parts, the pods can reach speeds of 165 mph. Skytran’s goal is to end traffic congestion around most major metropolitan areas. NASA Ames has built a Skytran test route and Skytran is building its own system in Tel-Aviv.

3.) Bill James, CEO of Jpods: JPods are also a personal rapid transit system able to move cargo and passengers at 35 mph on an elevated guide way that operates so efficiently that it could be powered by solar energy. While 35 mph may not seem fast, this becomes the last-mile component of the larger PRT ecosystem. Jpods has a letter of intent to build systems in both Linyi and Anshan, China as well as a project in Secaucus, NJ.

4.) Daryl Oster, CEO of ET3: ET3 (Evacuated Tube Transport Technologies) is a system where car sized capsules composed of high temperature superconductivity maglev materials that levitate on a permanent magnet track within the tube. The tubes are evacuated of air, with almost no air resistance, the capsules are accelerated via LEM. The Chinese have been researching and developing ET3 for 12 years. Three miles is needed for proof of concept. City to city networks via ET3 would allow 800lbs cargo/freight or up to 4 adult passengers, including luggage to travel 400-600 mph within local ETT-Evacuated Tube Transport networks. ETT networks would be able to connect with other local ETT networks while operating cross nationally around 1,000-4,000 mph. 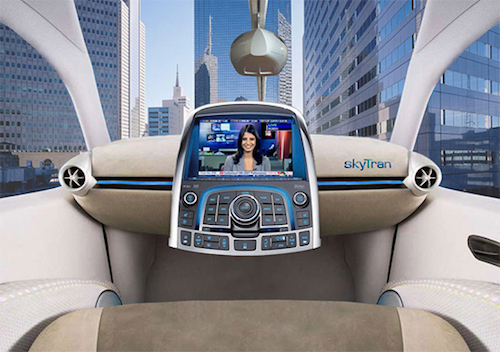 Riding inside a SkyTran capsule

PRTs offer a new dimension in transportation. They operate above the fray, independent of the frenetic energy of today’s highways, airports, train, and bus depots.

Unbeknownst to most, early adoption of these technologies is already taking place. As niche markets get established, expansion will follow as the advantages of personal rapid transit systems become widely recognized.

One of the major advantages is that they’re built around automated systems, eliminating the human variable as well as the chaos factor that stems from it. Unlike planes, buses, and trains, they don’t require a schedule. This is on-demand mobility that, once completed, will take anyone, anywhere, anytime day or night.

As cities expand, so does the demand for personal mobility. PRTs are scalable by increasing line density, expandable by adding more lines, and connectable to existing systems.

PRTs will also force our current transportation infrastructure to evolve. As an example, driverless cars will offer many of the advantages of local PRT networks, but it will take several decades before human operated cars can be eliminated from roadways. A well-functioning PRT system can make that happen quicker.

This is similar to what happened in the early 20th century when Ford’s Model T transformed cars from being a luxury item to a ubiquitous staple of American life in less than 30 years.

During the first 5 years of PRT implementation, cities will become less dependent on the dirty and inefficient internal combustion engines to move city residents, tourists, cargo, and freight. Large cities will likely be the first to integrate PRTs and expand their networks into suburbia, allowing easy and fast access for commuters as well as city dwellers.

Unlike building new highways, where buying land, rights of way, and neighborhood buy-ins, metro PRTs only require poles that can be erected along existing roadways. They also operated without the noise and pollution of today’s roadways.

The first city-to-city connections will be linked via an ET3 or Hyperloop system, transporting cargo and passengers at 375 mph within a 100-mile radius. 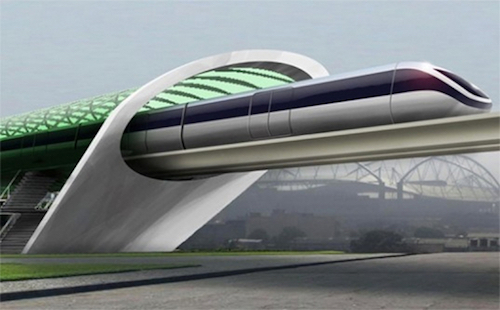 Much of the freight shipped today comes in standardized containers. This has worked well when it comes to shipping copious amounts of cargo on trucks and trains across continents or on ship transporting goods across the Pacific and Atlantic. But it’s also slow, labor intensive, and mind-numbingly complex.

Much of this will begin to change with PRTs as well.

A city-to-city route within a 200-600 mile range with an ET3 or Hyperloop system will be able to ship things like food, merchandise, or even a couch at a fraction of the cost of truck or rail. Individual capsules can be modified to handle liquids as well, opening the door to shipping things like milk, oil, fertilizer, and more.

Virtually everything on earth is synced to our ticking metronome of time, with those who can accomplish the most in a single 24-hour day gaining a significant advantage. Much of what we accomplish is tied to speed.

Within 10 years, your dreaded 7:00 am commute that takes 2 hours and half a tank of gas could be shortened to 20 minutes and virtually no gas.

As networks expand, the definition of a metro area will expand as people begin to routinely commute 500 – 1,000 miles each way for their jobs. A city like Milwaukee may be considered a suburb of Chicago as travel time is reduced. The entire Boston to Washington corridor could be massively linked into one large metro area.

Airlines will need to adapt to this new form of competition. As new routes get linked to the PRTs, traffic will begin to drop and schedules will have to be adjusted accordingly. Over time, airlines will become relegated to luxury class travel serving a far different clientele.

By 2035, PRTs will be crisscrossing most of the modernized world. Roadway bottlenecks will no longer be an issue and traffic will flow easily between North and South America, between Europe, Asia, and Africa, and even between North America and Asia by way of the Bering Strait.

Once ET3 is connected between the U.S. and China, the tube transportation system will have ultra high-speed vehicles operating at 4,000 mph, making the trip between Washington and Beijing in only 2 hours. This will indeed be the equivalent of space travel on earth.

However this entire journey begins with a few critical decisions that need to be made today.