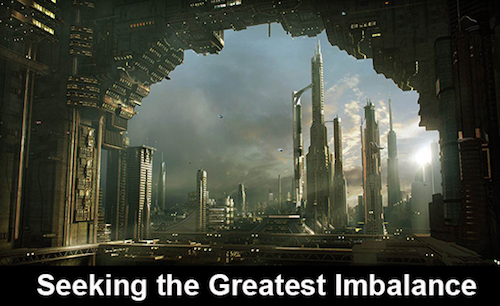 What, in your mind, will be the most powerful entity in the world 100 years from now?

As we look around us today, it’s easy to point to a single nation as being the most powerful. But will that still be true 100 years from now?

The most powerful entities in the future could be large multi-national corporations, giant associations of people or companies, religious groups, clusters of countries such as NATO, perhaps some new entity that controls technology like ICANN, or something else entirely?

Adding to the confusion of this question, what actually defines power? Is it money, clout, influence, an ability to control a large military, or some combination of all of these?

Will the notion of power be defined differently in the future than it is today?

These are all important questions to ask because powerful entities define who the powerful people are. And it is the underlying systems and technology that will determine status and clout.

Caught in the middle of all this influence-wrangling is the lowly city, an entity now subservient to states and countries, and often lost in the commerce of daily life. Are cities likely to remain at the lower end of the clout spectrum, or is there some new kind of power-shift afoot?

Here are a few thoughts about the rising influence of cities that may surprise you?

Today there are roughly 498 metro areas in the world with over 1 million residents. According to the Martin Prosperity Institute, the world’s top 100 cities alone generate half of the world’s total economic output.

The world population has experienced continuous growth since the end of the Great Famine and the Black Death in 1350, when it stood at around 370 million.

Cities have a disproportionate impact on global science research and innovation. They are often home to top colleges, government institutions, and research facilities. As in other fields, top researchers are drawn to cities for the opportunities to associate and collaborate with other leading scientists and institutions.

As an example, Beijing and Sao Paulo each contribute more than 20% of the annual production of peer-reviewed science publications in China and Brazil, respectively. Moscow accounts for more than 50% of Russian science articles.

Most are heavily invested in the rankings by major media outlets that show how they measure up against other municipalities with similar attributes.

Any city that demonstrates a successful new piece of infrastructure, attracts a major retail store, or builds a new library, airport, or convention center is quickly copied by other cities.

This constant effort to achieve parity or balance with other cities is missing the true potential for achieving a radical imbalance.

In the end, having the most well-balanced, well-functioning city means very little on a world stage where people only take notice of the anomalies

Great cities are never well-balanced. They only become great because of some huge imbalance.

Houston is well known because it is disproportionately weighted towards the oil industry. Los Angeles is famous because it is overly focused on Hollywood and the entertainment industry. New York, London, and Beijing all have an unusual emphasis on money and finance. And San Francisco has developed an extraordinary emphasis on the tech industry.

Once a minor imbalance has been achieved, a city can begin to attract the talent needed to perpetuate this unevenness.

According to Richard Florida, author of The Rise of the Creative Class, “Creative individuals want to live in places that protect personal freedoms, prize diversity and offer an abundance of cultural opportunities. With the possible exception of Hong Kong, Asia’s cities still lack this level of openness and attractiveness, even though six of the top 10 economic powers are in Asia — Tokyo, Singapore, Hong Kong, Shanghai, Beijing, and Seoul.”

The key to global competitiveness lies in a city’s ability to attract the best and brightest from every corner of the globe. In our increasingly mobile society, these kinds of population shifts will become much more common.

In September 2012, the Honduran government voted to allow for the creation of private cities, each with their own judiciary, laws, governments and police forces. They would have also been empowered to sign international agreements on trade and investment and set their own immigration policy.

Driving the proposal was the U.S. based investment group MGK who was willing to invest $15 million to begin building basic infrastructure for the first model city near Puerto Castilla on the Caribbean coast. They estimated the first city would create 5,000 jobs over the first six months and up to 200,000 jobs in the future.

However, the Honduran Supreme Court ruled the project unconstitutional. By 13 votes to one, its Supreme Court judges decided that the proposal violated the principle of sovereignty.

In this small country, with an average annual income of $4,400 and riddled with crime a corruption, the private city proposal was viewed as a quick fix for its current problems.

While this idea may have been fueled by good intentions, there is seldom a quick fix for bad government.

While cities are limited by their geographic boundaries, the physical borders do not limit their global clout and influence.

As living breathing organisms, cities are better positioned to experiment and take advantage of their regional differences. While countries may come and go, cities remain as long term entities that will survive and thrive into the distant future.

With transportation becoming easier, making us a more mobile society, and with cell phones and the Internet speeding up our digital communications, our cities are becoming a more fluid environment.

Much like water that flows downhill using the path of least resistance, businesses and social structures have begun to move from areas we find less appealing to areas that are more appealing.

Future cities will be designed around fresh new ways for people to meet people, and they will be judged by their “vibrancy, their interconnectedness, and their fluid structures for causing positive human collisions.

Going back to my original question, the most powerful entity in the world 100 years from now will not likely be an individual city. However, that entity will be headquartered in a city, and the symbiotic relationship between that organization and its host city with be a major contributing factor.

← Tax Code 2.0: Is Extreme Complexity the New Simplicity? Micro Credits: A Tool for Self-Organizing the Complex World of Education →