Micro Credits: A Tool for Self-Organizing the Complex World of Education 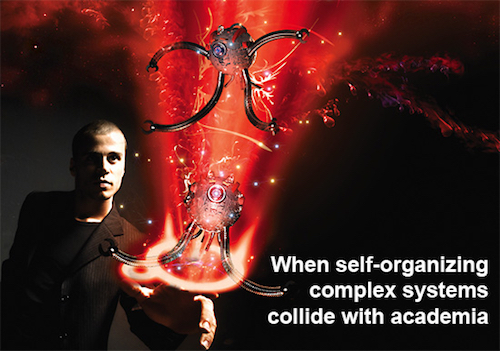 A recent TEDx talk about solving traffic jams started by asking the simple question, “Who is in charge of the daily bread supply for the city of London?”

Food supply chains have become enormously complicated, but as it turns out, there is no central “bread czar” for London or any other large city. The bread supply chain is a great example of a self-organizing system.

Most likely, if the City of London decided to appoint an official Bread Czar to oversee distribution, it would be fraught with daily bottlenecks and supply problems.

As society grows in complexity, how can we design systems that don’t require daily oversight, with self-regulating mechanisms capable of unleashing the true potential of humanity?

Perhaps our most broken system, in dire need of reform, is education, and I’d like to start with college-level education.

So how can we put in the right mechanisms and sub-systems with built-in checks and balances along with monitoring points, and yet have it be tweakable enough to make the complex systems used to govern colleges and universities self-organizing?

Admittedly, the world of academia is exponentially more complicated than the London bread supply, but I’d like to take a few minutes to explore this idea using the concept of Micro Credits as the entry point.

So, after spending the past few days consulting with Senior Fellows at the DaVinci Institute, here is what I’ve come up with.

“Who is going to jump first into granting a degree that doesn’t have the seat time requirement that we do today that employers will see as credible? Where does the credibility come from?” – Bill Gates at the World Economic Forum 2013 in Davos, Switzerland

University of California researchers James Short and Roger Bohn determined that the average person in the U.S. in 2009 was consuming information 11.8 hours a day, the equivalent of 100,500 words every 24 hours. While much of this “learning” may be relegated to low-effect, background noise, a portion of it will naturally fall into the category of higher impact learning with significant formative influence.

The question then becomes one of assigning credentialing to the learning moments that happen during any given day. With so many options, it becomes an exercise in “separating the wheat from the chaff.”

Learning experiences should not be based on the time spent learning, but rather on the value of learned skills that can be adequately defined by questions.

Micro Credits will be an assessment of learned skills, based on outcomes.

All questions will be multiple-choice with four possible answers. Answers to questions must be 80% correct.

This will mean that for someone to achieve the equivalent of 1 college credit, they will need to answer well over 500 questions and get over 80% of the answers correct.

Once all questions have been answered, people will be asked to assign five words to describe the kind of skills developed through the learning experience. These words will serve as the foundation for the user-based skills classification system described later.

EXAMPLE: An 18-minute TED video may be filled with rich content, enabling 30 good quality questions to be asked about the subject matter. In this situation, the learning experience would be valued at 5 Micro Credits. At the same time, a less content rich 3-hour documentary may only warrant 10 questions, or 1 Micro Credit assigned to its content.

The Micro Credit system, as described here, has a series of built-in self-limiting checks and balance mechanisms. First, the content must have sufficient value to ask a minimum of ten questions. Second, all Micro Credit learning applications and questions will be evaluated by an independent third-party organization skilled in Micro Credit assessment.

Most importantly, users will have to feel the expenditure of time and energy to be worth the credits they receive. Since time is a precious commodity, the length of a test will be inversely proportional to likelihood that someone will complete it.

Here is a brief description of some of the other characteristics recommended for this system:

Varying degrees of learning happen many times throughout every day. The process of validating the learning can take many forms. The Micro Credit system described above will not apply to all situations.

As a starting point, a pilot project should be formed around written and video content, involving books, movies, TV shows, video shorts, and other written documents. Once these forms of content are validated and a sufficient consumer demand is demonstrated, other forms of content can be added.

Here are of few other implications that may result from a well-functioning Micro Credit system:

College credits are based on the number of contact hours per week in class, with the assumption there will be twice as much time involved in study and homework.

From section 600.2 of the DOE’s regulations:

Definition of a Credit Hour: The minimum amount of work that is an institutionally established equivalency that is not less than one hour of classroom or direct faculty instruction and a minimum of two hours of out of class student work each week for approximately fifteen weeks for one semester; or ten or twelve weeks for one quarter hour of credit, or the equivalent amount of work over a different amount of time.

Since most college classes are only 45-50 minutes and many classes require far less homework than the two-for-one studying ratio suggests, there is considerable grey area in this formula.

CEU stands for Continuing Education Unit. A CEU is a unit of credit equal to 10 hours of participation in an accredited program designed for professionals with certificates or licenses to practice various professions.

IACET (International Association for Continuing Education & Training) is the caretaker of the CEU.

Doctors, nurses, lawyers, engineers, CPAs, real estate agents, financial advisers, and other such professionals are required to participate in continuing education programs for a certain number of hours every year in order to keep their certificates, or licenses to practice, current. The annual number of CEUs required varies by state and profession.

The failure of this system is the onerous time and place requirements with scant attention paid to actual subject matter comprehension.

What I have described above is a self-organizing system.

Since most people still believe that education must take place in the classroom, and only educators can create new courses, we have placed a very constrictive valve on the inflow of new education options.

The system described above for Micro Credits is intended to be every bit as rigorous and demanding as traditional college coursework, with the primary difference being the alternative pathways for both creating and assigning fractional credits.

Keep in mind that the granting of a single college credit will require answering over 550 questions on a minimum of 10 separate tests.

This is a system that will instantly spawn new thinking, but may not develop the critical mass necessary to disrupt anything.

When it comes to designing a new system like this, as much as we study ourselves, there is still much that we don’t know.

According to former Harvard President Larry Summers, “It’s important to remember that we’re not so good at understanding the subtleties of environments that make them attractive to people. Look at football for example. One way to watch a game is to sit on a cold bench with no good food and bad bathrooms. The other is in our own living rooms, with instant replay, and food you like at your convenience. And then ask yourself – which would you guess people pay for? Which do people cheer for? You’d get it wrong. There are aspects of bringing people together in groups that we can’t quite understand and judge. The working out of this will depend a lot on formulas for making it attractive and collaborative. And as the football example suggests, it won’t be immediately obvious what those models are.”

This entire column is intended to serve as a starting point, to initiate additional ideas and further conversation. So I’d love to hear what you think.

Is this a rational approach, and if so, how would you change it to make it better?

NOTE: This entire conversation is being closely monitored by a well-positioned state legislator who is considering drafting a new bill around these guidelines.