Trimming the Fat – Introducing the Lean Micro-College Model for Education 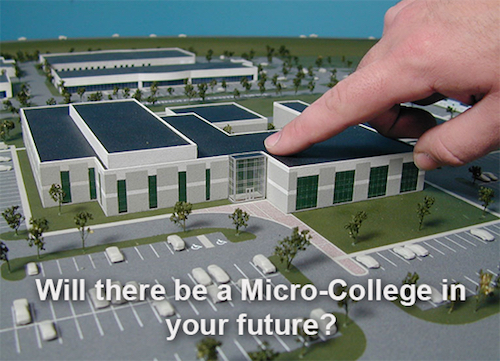 Last year the DaVinci Institute launched a computer programmer training school, DaVinci Coders, and one of the key people we tapped to be one of our world-class instructors was Jason Noble. On Friday I attended a talk given by Jason at the Rocky Mountain Ruby Conference in Boulder, Colorado titled “From Junior Engineer to Productive Engineer.”

Working as a Senior Software Engineer for Comverge, an intelligent energy management company in Denver, and also part-time instructor for DaVinci Coders, Jason understands what it takes to train people both in the classroom and on the job.

In his presentation he compared the apprenticeship times necessary to bring three different newly hired Junior Developers up to speed – one with no Rails experience, one who attended our 11-week course, and another who attended a 26-week program at a different school.

He concluded that the one with no Rails experience required 6-7 month apprenticeship time, the one with 11-weeks training required 2 months, and the one with 26 weeks schooling was up to speed in 3 weeks.

He also estimated hiring a talented college grad with a computer science major, the apprenticeship time would likely be more than 2 months, but they’d also bring other valuable tools to the table.

Yes, this is an unusually tiny sample size for a test case and training times will vary greatly. But this type of comparative analysis naturally begs the question of how much training should be required prior to taking a job, and whether the investment of time and money spent on training should be optimized around the company or the employee, knowing there will always be some in-house training required.

When we look at the bigger picture of retraining for this and many other professions, knowing that people will be rebooting their careers far more often in the future, with time being such a precious commodity, how do we create the leanest possible educational model for jobs in the future? That’s where the Micro-College concept comes into play.

How Lean is Too Lean, and How Fat is Too Fat?

In the movie “Slumdog Millionaire,” Jamal Malik, a penniless eighteen year-old orphan from the slums of Mumbai, is asked a series of very difficult questions on his quest to win a staggering 20 million-rupee prize on India’s “Who Wants To Be a Millionaire?”

As a street-smart kid with virtually no formal education, the probability of him answering these questions correctly was zero. However, as luck would have it, his life experience had given him precisely the answers he needed, and very little more.

This is an example of an extremely narrow education, only applicable to the one-in-a-billion situation portrayed in the movie.

On the other side of the equation are people who go through all the work of getting bachelor and master degrees and still not having the skills necessary to gain employment.

Traditional colleges, for the most part, do a great job, but they are all oriented around seat time. They also come with the overarching philosophy that nothing of value can be learned in less than four years, a timeframe woefully out of sync with someone needing to change career paths.

So at what point is education “too lean,” and conversely, when is it “too fat?”

Typically, universities require students to achieve both breadth of knowledge across disciplines and depth of knowledge in a particular chosen subject area, known as a major. For this reason, students studying Arts or Humanities are required to take science courses, and vice-versa.

While this made sense hundreds of ears ago when the university system was first created, the average person today in the U.S. spends 11.8 hours each day consuming information. Yes, much of it is TV, radio, and rather frivolous kinds of information, but not all of it.

The sheer volume of information we’re exposed to every day makes the average person today far more informed, aware, and intelligent than their counterpart 50 years ago. Known as the “Flynn Effect,” after researcher James R. Flynn, the average IQ in the U.S. has been increasing every generation for over 80 years, ever since IQ tests were first developed.

So does “breadth of learning” still needs to be a requirement since it’s already part of our “ambient learning culture?”

Micro-Colleges are any form of concentrated post-secondary education oriented around the minimum entry point into a particular profession.

With literally millions of people needing to shift careers every year, and the long drawn out cycles of traditional colleges being a poor solution for time-crunched rank-and-file displaced workers, we are seeing a massive new opportunity arising for short-term, pre-apprenticeship training.

Many Micro-Colleges will fall into the category we often refer to as vocational training, a term poorly suited for the professional craftsmen, artisans, and technicians they will be producing. Since status and credentialing are critical elements of every career choice, any training producing specialized experts will need to come with industry-recognized certifications and titles.

On a recent “Future of Beer Tour,” an event we produced at the DaVinci Institute that took us on a futuristic bus tour of 5 local craft breweries, one of our on-board experts mentioned that a local college was planning to offer an official major and degree for becoming a “brewmaster.” This is yet one more example of taking an industry where most brewmasters are self taught in a couple months and stretching it into an expensive 4-year college degree.

The Micro-College approach to training brewmasters would be an intense 2-4 month training program with a designated apprenticeship period learning on the job.

Using this line of thinking, the potential for Micro-Colleges is huge, and emerging technologies and business trends are creating more opportunities on a regular basis. Here are a few possible:

These are but a few examples, but with a creative team brainstorming, we could easily list over 100 possible Micro-Colleges.

Automotive engineers working at a car factory in the 1950s

As a former IBM engineer, I’ve thought a lot about the relevance of my college years and the work I did as an engineer.

Since my coursework happened in the pre-computer era, most of the skills I needed after computers were introduced were primarily self-taught.

While I used a far amount of math, trig, and geometry, I never used what I learned in the required higher-level math courses like calculus and differential equations.

Most of my engineering coursework became quickly dated as computers and calculators made the previous generation’s work tools like slide rules, protractors, calipers, and drafting tables obsolete.

My first FORTRAN class using a card-punch machine was obsolete even before I had punched my last card.

Perhaps the most valuable courses with long-term relevance were classes in writing, English, speech, art, design, and the special research projects that forced me to find my own answers and write a final report. The art helped me understand that engineering was a form of creative expression.

Nothing I learned was worth zero, but certainly some courses held far greater value than others.

However, starting from the premise of training for the minimum skill requirements of a profession, what exactly are the core courses needed for someone to enter a particular engineering field?

Yes, an electrical engineer is far different than a petroleum engineer, and a mechanical engineer falls in yet another category. The number and type of core courses may vary. But rather than expanding courses to fill an arbitrary four-year requirement, how much fat can be trimmed and still produce an effective, competent engineer?

Using an intensive, full-immersion approach to education, could a school churn out competent industry-ready engineers in less than 2 years?

If the school were tied to an industry-specific apprenticeship program with a near-perfect handoff between academia and real-world work happening inside the industry, what would a super-lean engineering program like this look like?

Since we launched DaVinci Coders in the 2nd quarter of 2012, over 40 other coder schools have cropped around the U.S. and even more in Canada in Europe.

Every successful Micro-College will cause others to follow in their footsteps and refine the original business model.

It’s easy to imagine that as traditional colleges see their student base decline, many will begin to partner, merge, and purchase fledgling Micro-Colleges and begin incorporating these new areas of study into their own catalog of course offerings.

Since existing colleges bring with them credit-granting accreditation, along with status, credibility, and the ability to offer student loans, in-house Micro-Colleges will likely become a rapidly growing part of campus life.

Many colleges will find the Micro-College niche they take on to be the key differentiator between them and other schools.

The systems used to create colleges centuries ago seem justifiably primitive by today’s standards. Learning formulas for nearly every degree are based on hours, one of the least important considerations when it comes to assessing talent.

Colleges today cost far too much, and they take far too long.

Just like many other industries, traditional colleges are being tasked to do more with less. But at this point they don’t have a clear understanding of what “less” looks like.

MOOCs are offering a new way to produce and distribute lecture-style courses, but that only represents a piece of a much larger equation.

Because of their ability to instantly positions themselves at the critical cross-section of skill and commerce, far more new industries will be born through Micro-Colleges than through traditional colleges.

So will there be a Micro-College in your future?

NOTE: This is a new concept, still with lots of rough edges. I’d love to hear your thoughts, so please leave your comments below.