Where is My Flying Car? 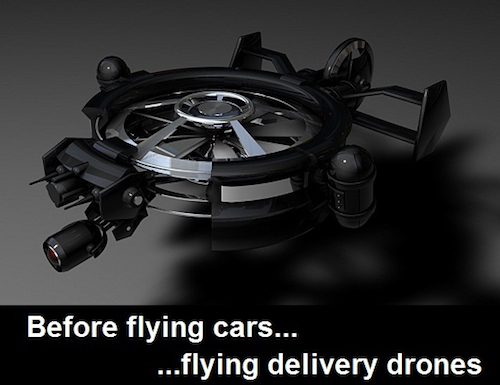 First things first. Before we can have flying cars,
we will need to go through the era of flying delivery drones

Imagine yourself in 2030, 20 years in the future, sitting in your living room watching your favorite show on a 3D holographic display, and you witness a product placement scene where someone is eating one of the best pizzas you’ve ever seen. The depiction is so lifelike and intense that you instantly start craving pizza, and simply utter the word “yes.”

Thirty seconds later, a flying delivery drone docks with your house and delivers the exact pizza you were craving along with a six-pack of your favorite beer. It automatically knew what you wanted, and it knew about the beer as well as the pizza.

As this plays out, you will have eaten half of the pizza before you realize what you paid for it.

Marketing people have worked for decades to shrink the time-gap between the marketing moment and the buying moment. In this scenario, I’ve also added a nearly instantaneous fulfillment moment.

With this simple illustration we can begin to see the immense potential of flying delivery drones and the radical changes they will impose on everyday living. At the same time, they become the critical next step for us to advance towards one of our most sacred unfulfilled dreams, the age of the flying car.

So what exactly is a flying car?

Most of us are still stuck on visions of George Jetson’s car, remnants of Hanna-Barbera’s hugely influential cartoon series launched in 1962. Our first generation of mass-produced flying cars, however, will look far different than what George was driving.

Over the years we have seen many versions of flying cars starting with the Curtiss Autoplane in 1917. Decade after decade, designs have evolved along with the conceptual underpinnings of what constitutes a flying car.

In 2009 when Terrafugia launched the maiden voyage of its own flying car known as The Transition, the universal reaction people voiced was, “Interesting, but it’s not really a flying car.” (Photos below)

NASA has begun referring to them as PAVS (Personal Air Vehicles) and has attempted to differentiate flying cars from other flying vehicles and has concluded that for any of these vehicles to become commercially successful, they need to meet the following criteria.

Essentially, flying cars need to be as comfortable as cars today, extremely safe, and fly from Point A to Point B on its own, with no human interference.

Expanding on NASA’s list, five key technological breakthroughs will be needed for the first generation of flying cars to become viable:

Additionally, with the potential for thousands of vehicles clutter the airspace, one additional requirement will be that they become virtually invisible from the ground.

In addition to the technology built into the vehicles, we will also need to develop a workable air traffic control system for exponentially larger traffic volumes.

With several hundred thousand vehicles flying over a city, there will need to be an organized system for managing the traffic, and having all vehicles at a particular altitude traveling the same direction would eliminate many problems. This is an automated navigation system I’ve labeled the Norman Matrix.

With a fully automated navigation system, this type of maneuvering should be invisible to the operator.

While not a perfect solution (the North Pole becomes a crash point for those flying due north), it does represent a good starting point for engineering a more comprehensive air traffic solution.

As we look over the list of technologies needed, it becomes clear that virtually every aspect of the flying car era will also be needed for us to usher in a workable system for flying delivery drones. But it can be done without the dangers of flying people.

For us to reach a point where large numbers of average people can conveniently fly across town for work, school, and shopping, we will need to spend a few years practicing with non-passenger drones. Once the drones have been perfected, we can easily transition to the flying car era.

The U.S. Military has been proving the viability of unmanned drones, with over 5,500 already being used in combat. However, most military drones, such as the Predator and Reaper, are designed to operate more like a plane with runways for takeoff and landing.

Deliver drones, like flying cars, need precise vertical takeoff and landing capabilities. For this reason, some of the innovative companies in the rapidly growing quadricopter field may be better positioned to move into this category. Quadricopters today are primarily used for surveillance and aerial monitoring. (Photos below)

Thinking beyond traditional deliveries, flying drones may be used to deliver water, change out the batteries on your home, remove trash and sewage, and even vacuum the leaves on your lawn. For some, the drones will allow them to live off the grid, and even off the net.

Changing the World in the Process

When the Internet began to scale in the early 1990’s, it did far more than transform communications. The viral nature of the World Wide Web began creating borderless economies, causing individual countries to lose control of commerce.

In addition, to borderless commerce, it created confusion about issues related to power and control, even the sovereignty of nations.

Once the volume of flying cars reaches a significant number, somewhere in the range of 500,000 to 1 million, countries will begin to lose control of their citizens.

Borders will become meaningless to people with flying cars. Yes, it will be possible for countries to develop electronic borders, but that will only create a black market for cloaking devices and invisibility shields.

Flying cars will do far more than transform transportation; they will transform government, taxation, conflict, commerce, culture, patriotism, and much more. As with any new technologies, not all of the changes will be good.

In the early days of the Internet, we could only begin to imagine the opportunities that would eventually accompany this kind of innovation. It will be the same with flying cars.

For me, the best way to phase it is: “Flying cars will unleash our bodies in much the same way the Internet has unleashed our minds.” 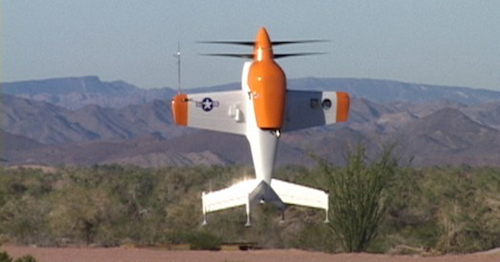 In 1998 AeroVironment was given a contract by the Air Force to develop SkyTote,
a new concept for a cargo-delivering UAV (unmanned aerial vehicles) that lands on its tail. 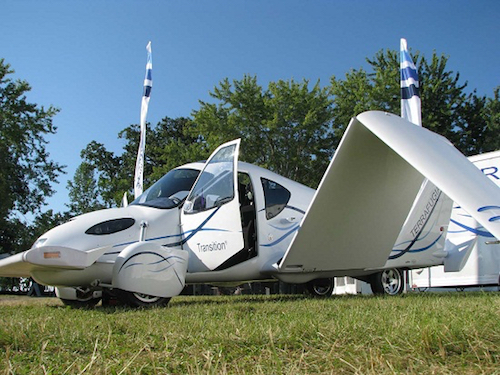