Who Controls the Education Industry? 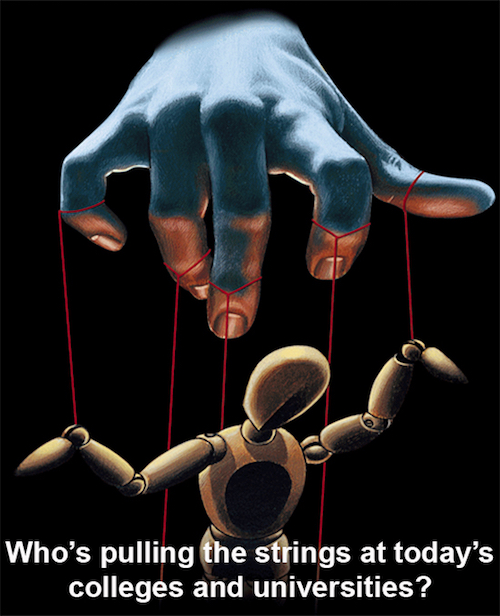 Let’s first start off with a different question. “Who controls the bread supply in London?”

This was the opening question that Jonas Eliasson started with in his TED talk titled “How to solve traffic jams.”

As it turns out, there really is no single person responsible for making sure bread gets distributed every day in London. He used this as an example of a “self-organizing complex system.” So rather than relying on some bread czar to issue top-down edicts to make things happen, the system organizes itself.

A few months back I was interviewed for a Canadian documentary titled “Generation Jobless” produced by Dreamfilm Productions. The core focus of this documentary was to point out the amazing number of disconnects between higher education and the job market, and why such a high percentage of young people today can’t find work.

As an example, each year Canadian colleges graduate 3 times as many teachers as there are teacher openings. Many other industries have similar discrepancies with either too many or too few graduates to match industry openings.

To further complicate matters, employers are now placing a higher premium on experienced workers, and are less willing to invest time and money for training new entrants themselves. With colleges only offering the training piece, graduates are left in a catch-22 situation with little opportunity to get the work experience without the opportunity to actually work.

This started me down the path of considering why London’s bread supply works spectacularly well as a self-organizing complex system, yet education does not. And it all began with the central question, “Who controls the education industry?” 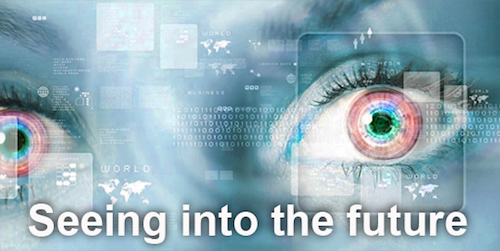 Betting on Your Future Self

For most entrepreneurs it’s very easy to determine who the customer is. It’s the person who decides to pay for the goods or services you have to offer.

But in higher education the buyer/seller relationship gets very muddy. Students taking the course will usually pay for it eventually, but often get loans, scholarships, and other forms of assistance along the way. In many respects, the future employer is the chief consumer of college output.

Whenever the purchase obligation is somehow “lubricated” either through grants, third-party payments, loans, or something else, the onus of responsibility gets shifted to some future version of yourself.

Most students believe their future self will always be richer, more connected, and more able to deal with financial obligations than their current self. In many cases, this is a correct, but not always. As a result, it is very difficult to accurately decide what kind of pain threshold you should impose on your future self.

When given the choice, immediate gratification almost always wins over future responsibilities. It’s very easy for a college representative to talk about the successes and lifestyles of their most prominent graduates, with the natural inference being that the only thing separating them from their much wealthier future self is signing on the dotted line.

In this context, students become the ultimate risk takers, betting on themselves to develop viable, marketable skills that the world needs.

It was five years ago when today’s college graduates decided on which college to attend and what their major should be.

This is the stark reality of the 5-year educational pipeline created by today’s existing college and university system. Today’s colleges take far too long and are far too expensive. 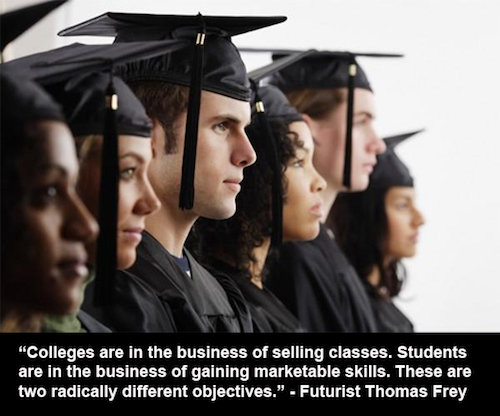 If colleges only got paid after students completed their first full year of work after graduating, even if only part of the tuition was withheld until then, they would quickly shift their focus from teaching what they thought mattered, to what future employers thought mattered.

Every HR administrator in the country would instantly become best friends with the college president.

Today, with college loans skyrocketing out of control, and the responsibility for repayment of the student loan falling solely upon the student’s shoulders, without even an option for filing bankruptcy, we are forcing 18-20 year olds to make lifetime decisions without any good basis for making that call.

Last year, James Glattfelder presented a very probing look into areas of power and control with his critically important TED talk, “Who controls the world?”

After conducting an impressive amount of research, he determined there were over 43,000 significant transnational corporations who essentially control the world. But probing deeper, he found that 737 of the top shareholders (primarily those in the banking and finance world) controlled 80% of the value in these corporations.

Drilling down even further, a tiny subset, consisting of only 146 individuals, controlled 40% of the wealth of these companies.

If we were to apply Glattfelder’s research to the world of education, we would undoubtedly find similar patterns of wealth, control, and power. Even though most of the highly regarded educational istitutions are non-profit and not “ownable,” the puppet strings of control are invariably being pulled by a similar set of individuals.

However, when it comes to policy decisions that help guide the overall direction of the higher education industry, much of that power and influence has traditionally come from key individuals at elite institutions like Harvard, MIT, Cambridge, Oxford, Yale, Princeton, Columbia, etc.

Over the past couple years we have witnessed a significant power shift. Online education powerhouses like iTunesU, edX, Coursera, and Udacity have risen above the noise and are jockeying for industry clout. Coursera is currently showing signs of becoming the 8,000 gorilla in this space.

Once 2-3 diffinitive industry leaders emerge, they will also have the ability to change the rules of the game.

As an example, 5 years from now Coursera could very possibly have 50 million registred students from around the world. With that type of following, they could implement an entirely new system for replacing college credits and devise a far more effective way of credentialling academic achievement, with traditional Bachelor, Master, and PhD being replaced with 10-20 achievement levels that recognize learning over an entire lifetime.

First, to function as a true self-organizing complex system, education needs to be parsed into far smaller learning elements. Semester-long courses are too long to allow quick change from a teaching standpoint, and overly burdensome from a student (consumer) perspective.

Is it possible to convert today’s college education from semester courses into a series of one-hour modules, maybe even shorter?

Replacing a one-hour module is far easier than replacing a 12-week long course. So from the standpoint of creating a highly adaptive, highly responsive learning system, course length is a critical element.

Second, when it comes to giving students accurate information to make informed decisions about their education, we will need to provide real-time statistics on employers, jobs, salaries, student loan details, etc.

Making these two changes alone will move higher ed significantly down the path to becoming a self-organizing complex system.

Business professionals in the future will require twice as much training as their counterparts today, just to stay competitive.

As we move further towards a globally competitive workforce, competition will stiffen, and our need to shift gears will happen at a moment’s notice. We will no longer have the time and place luxuries of waiting for the right opportunity for education to happen.

If your entire universe of course options is the 1,500-2,000 courses offered by a local universities, you will find yourself at a severe disadvantage when competing against someone who takes courses on Coursera, EdX, iTunesU, Udacity, or Learnable.com.

The transition ahead for colleges and universities will be very messy, as competing forces on both sides of the change movement begin to form. As with virtually every other industry of the past, colleges will be forced to become more efficient, doing more with less.

Over time, this transition will offer tremendous benefits to society. In much the same way that ancient libraries had their books chained to the podiums, colleges have tried to chain learning to their campuses. Unleashing these chains of learning will serve as a cathartic release for the entire world.

That’s just a few of my thoughts but I’d love to hear what you’re thinking.

← Portrait of a New Radical: Hyper-Transparency and the Coming Radicalization of America Proposal to Eliminate Forest Fires Completely →