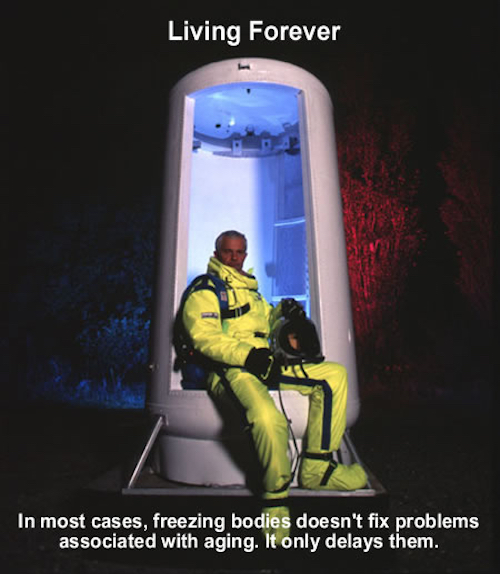 No person should ever die…. EVER!

Is that the direction we’re headed?

There are many reasons why people die, yet these reasons may all disappear as we develop fixes and cures for everything that ails us.

Aging is currently our biggest problem. Over time we’ll likely be able to fix the aging problem and delay aging indefinitely .

So, if we had the ability to fix the problems involved with aging, injury, disease, and deviant behavior, theoretically we could create a society of people capable of living forever.

Is that our goal? And if it is our goal, and we become very adept at fixing all of these problems, at what point does it become a right?

At what point will the notion of living forever become an inalienable right, a privilege of legal significance, similar to those rights granted to citizens in every country on earth.

If we solve the problems associated with aging, will prisons still work as a form of punishment? Since incarceration is a universal form of punishment for criminals, will criminals someday have the right to “hibernate” during their time in prison?

Recently an editor for Morning Calm, the in-flight magazine for Korean Airlines, contacted me about an article they were preparing on the future of cryonics, the science of freezing human bodies and placing them in a state of hibernation. They were looking for arguments both for and against the technology.

Cryonics is a technology that will serve as a stepping stone towards the ultimate goal of achieving individual immortality, of cheating death. Preserving life in a state of suspended animation, a state where Einstein’s laws of space and time are temporarily put on hold, is just one tool in a much larger toolbox that we are creating.

While a few wealthy individuals want to preserve their legacy by preserving their bodies and minds through cryonics, we have yet to prove that it is indeed achievable.

In most cases, freezing bodies doesn’t fix problems associated with aging. It only delays them.

For some, the idea of preserving a body through cryonics is no less formidable than fixing the problems of aging, disease, and injury.

Naturally the first argument against living forever will be the “too many people” argument. If no person ever dies, we will quickly run out of room. The earth will quickly fill up and we will have no place to put all of the people, their homes, cars, and belongings.

This argument, however, changes quickly when we change perspective from an over-populated earth to a very under-populated universe. The limitations of earth resources become a non-issue when we begin colonizing other planets. And our push to colonize other planets is one of many driving forces behind the fledgling science of cryonics.

The plan for creating hibernation chambers aboard vehicles designed for deep space travel and exploration has some appeal, but an argument can be made for building spaceships large enough to allow people on board to grow and develop as a society, in situ. So once they arrive at their destination, many years – even decades – later, they will be a fully functioning society, a more durable people, better prepared for the unknown challenges they will face while trying to establish a new civilization on another planet.

← The Search Command Center Ten Rules for Bootstrapping Your Business →