Prize Competition #1: The Race to the Core 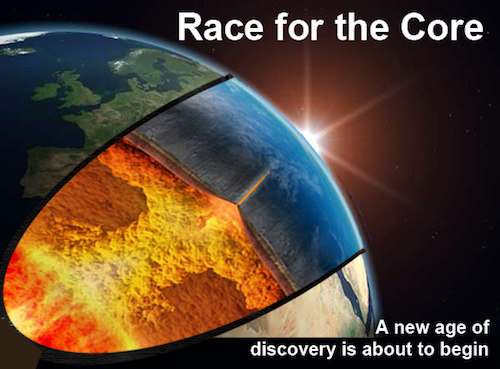 Over the next year I will be proposing a series of eight major prize competitions, competitions designed to pit the countries of the world against each other in a series of extraordinary tests of skills and abilities.

Only countries will be allowed to compete; not companies, colleges, or any other kind of organization. Each country will be allowed to submit up to two teams, similar in some respects to an Olympic competition. However, in these contests, there will be no second or third place. Teams will compete until one country wins.

At stake will be a combination of national pride, personal legacies, and laying claim to unprecedented achievements in science and industry.

Behind this announcement is our team at the DaVinci Institute. To some, this may be nothing more than an intellectual exercise to postulate eight grand challenges for the future. Our hope is that we may somehow stir the imagination of people around the world and, bare minimum, incite a global conversation.

The reason we have chosen eight competitions is because of the eight dimensions of the Octagonist, a competition framework that I will explain at a later date. Each of these competitions will be the most challenging ever imagined. Some may not be completed in our lifetime. They are designed to stretch human thinking and push the envelope of understanding.

The first competition that I am announcing today, will be a race to send the first probe all the way to the center of the earth – 3,950 miles straight down.

In 1970, geologists in Russia launched into a major drilling project at the Kola Peninsula, near Finland, with the expressed intent to burrow into the earth’s core. After 22 years working on the project, they had managed a hole the diameter of a small melon, extending 7.6 miles down.

The project ended when the crust turned mushy under the drill bit. They had bored into temperatures as high as 356 degrees Fahrenheit, much hotter than expected at that depth.

The Kola Peninsula borehole is by far the deepest hole ever dug, yet it stretched only 0.2 percent of the way to the core.

Today, the Earth’s interior remains as frustratingly out of our grasp as it was 300 years ago when the famous astronomer Edmond Halley postulated that the inside was hollow and filled with living creatures. We consider his ideas humorous today, but the fact remains, when it comes to understanding the center of the Earth, no one knows anything for sure.

The Need for Precision

Geological text books like to describe the Earth in terms of four primary layers – the crust, the mantle, the outer core, and the inner core.

The distance to the Earth core is roughly the same distance as between New York City and Stockholm, Sweden, or the distance between Warsaw, Poland and Calcutta, India. If we described the journey between these cities in terms of “four regions that you will go through,” the description would seem at best, primitive.

We have no maps of the center of the earth. We have no accurate diagrams, no understanding of motion, fluidity, or changes happening with any degree of accuracy.

While scientists are developing skills to work with nanoscale precision on the earth’s surface, the best we can muster below the surface is blindfolded guesswork done with 100 mile precision.

As you can see from the chart below, many thousands of people die every year because of our own ignorance. Without any prediction systems, it’s impossible to move people out of harms way. 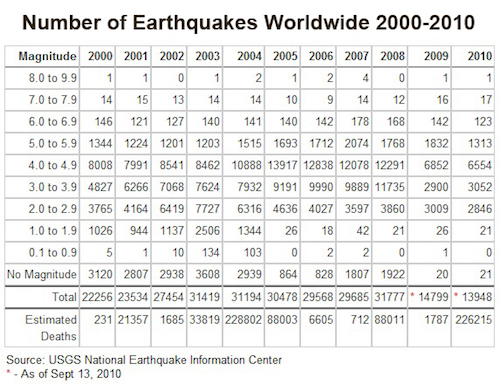 The goal of this competition is to develop a technology that can more easily probe the inner workings of the earth, and do it with far greater precision.

The competition is not just about mitigating earthquake deaths, or knowing when the next volcano will erupt, or when the next shifting of the poles is about to occur. It’s all that, and much, much more.

When it comes to the technology needed to get to the center of the earth, that’s where it gets fuzzy because some new kind of technology will need to be developed. At this point we can only speculate.

Geophysicists have built models of the Earth’s core by studying seismic waves that ripple through the planet. Every year thousands of earthquakes are recorded at the various seismic stations, with some intense enough to be recorded all the way through the earth.

These waves flow through the earth at differing speeds depending on the types of materials they flow through. The faster the waves, the denser the material. Seismological data is then overlaid onto our existing models of the earth’s interior to add more evidence about what lies below.

Everything we know about the earth’s core has been developed through indirect evidence.

Geophysicists, at best, can only describe the topography of the inner Earth with a resolution of many miles, not inches. So any probe traveling into the earth will have to create its own maps along the way.

Some teams may consider using advanced boring technology. But that may not be the best approach when considering the distances involved. If an extremely fast boring technology enabled a probe to move at the blazing fast speed of 1 mile per day, it would still take nearly 11 years to reach the core.

One approach may be to use super thin nano-wires that worm their way along. Another may be to use high powered lasers or some sort of plasma drill.

In addition to all of the other obstacles, two other challenges will be to find a power source capable of driving the probe, and developing a through-the-earth communication system that works even through thousands of miles of molten rock.

The basic requirements for this competition are that the probe needs to begin on the surface of the earth and travel all of the way to the center. As it moves along the way, it will need to be in constant communications, transmitting data to its team on the surface.

The exact kind of data capture mechanisms to be placed on board the probe will be determined in the coming months. However, at minimum, it will need to be recording and transmitting the temperature, geo-location, pressure, radiation levels, consistency, and makeup of the surrounding materials.

There will also be a requirement that the effort not cause irreparable harm to the earth. We don’t want to mess with the tectonic plates, interfere with magnetic fields, or inadvertently split the world in half. Undoubtedly some crazy ideas will be proposed. But in the end, this is an information-gathering exercise, not a win-at-any-cost competition.

Only countries will be allowed to enter teams, and each country will be limited to no more than two teams.

There will be no limit to the number of people on a single team. That will be governed more by the county’s own budget.

All teams will be required to maintain accurate records of their personnel, research data, and stages of their development.

As in the Olympics, the winners will each receive a gold medal. However, the true value will come from the accomplishment.

In much the same way the Hubble Space Telescope has given us a never-ending stream of visual data about our universe, this technology will serve as a never ending stream of discovery, mapping region after region of inner-earth geology.

For the material science industry, it will be a technology capable of locating deep earth mineral deposits.

Most importantly, the team that wins will have carved out their own legacy with a permanent place in the history books.

The cost of managing a competition of this scale will be significant. For this reason the entrance fee for each team has been set at $1 million USD per team. The money will be used to fund an endowment to insure the long-term viability of this competition.

As the competition ramps up, an entirely new organization will be created. This organization will require a highly skilled management team and staffing with extraordinary technical expertise. This team will need to be in place for many years, perhaps even decades.

The amount also represents a tiny fraction of one percent of the amount each team will need to budget for their efforts. Team budgets will likely be in the billions of dollars.

The competition will also require its own governing body. Since it will be a venture into the unknown, pushing the limits of science and technology, there will need to be an international governing body responsible for oversight and dealing with unforeseeable circumstances.

The exact makeup and responsibilities of this governing body will be determined over the coming months. But minimally it will include one representative per team from the countries they represent.

Each year billions of dollars are used to clean up after natural disasters occur, and much of that cost is being driven by our own lack of knowledge. Without any forewarning, we leave people in harm’s way. Without understanding the scope of possibilities, our thinking is flawed, and our policies and planning are equally flawed.

Humanity has a higher calling than that of being habitual victims. Nature causes far more casualties than any war. If we are willing to fight wars, we should be willing to fight a war against cruelest monster of them all, our own planet.

The future hates complacency, so much so that it has built-in self-sabotaging mechanisms to continually hold our feet to the fire. If we are not moving forward, we are instead moving backwards. There is no middle ground.

People are at their best when they are challenged. If we don’t challenge ourselves, nature has a way of giving us challenges anyway.

But we have very few of the grand challenges capable of moving humanity to a whole new level. For us to compete effectively, we need to know there’s a finish line. And that’s what we are hoping to provide.

In the end, this is a competition where all of humanity can end up a winner.

← The Fall of Book Publishing: The Rise of New E-Book Business Models Interview with Ukraine's InvestGazeta →