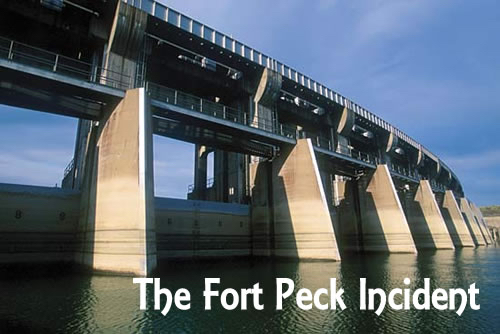 The two men sit patiently in the small grove of trees, quietly assembling their gear. Few words are spoken between the two of them. Weighted backpacks with connecting wires are placed in a motorized raft, followed by two coolers and fishing rods. Both are dressed as non-descript fishermen to blend in with the Montana population.

Shortly before sunset the two slide their boat into the waters along the east side of the famous Fort Peck dam near the town of Fort Peck, Montana. The dam, located near the headwaters of the Missouri River on the vast prairies of eastern Montana, has water extending as far as the eyes can see. It is one of the worlds largest rolled earth dams. The picture of this man-made creation is a spectacular sight.

Entering the waters slowly, checking buoyancy and weight distribution, the two start the low power motor on the raft and begin to make their way along the 10-mile stretch towards the spillway. After the 30-minute ride, the throttle is slowed to a bare minimum, as they move in near silence along the dam spillway.

Checking position markers with a flashlight, the phony fishermen close in on marker “G”, a point just east of the spillway on the giant earth berm used to contain the water.

On locating the marker, a series of seven interconnected backpacks are lowered into the water. Each backpack, strategically separated along a common tether, forming a well-conceived plan for disaster. Special knots on the lowering rope enable the terrorists to gauge the depth of the water. Once the desired depth is achieved, the raft is maneuvered so the backpacks come to rest along the sloping earthen fill. The end of the rope is tied to a grappling hook, which is hand pressed into the side of the dam to anchor the explosives into place. The start button on the waterproof timer is depressed, and the world’s single most destructive terrorist act has begun!

The date and time has been carefully chosen. Spring runoff has pushed the dam capacity to near record levels and the 120 minute timer allows plenty of time for the two men to pack all their belonging and disappear before the prescribed detonation time of midnight.

The Fort Peck dam, built in 1943, has served for decades as a source of hydroelectric power, potable water, and seemingly limitless recreation. This sleeping giant, lying unnoticed among the not-too-scenic eastern plains of Montana, is about to be awakened.

Overcast skies made the evening darker than normal, with only a few perimeter lights casting a dotted line along the dam and hydroelectric plant.

Two minutes past midnight, a blast of unmeasurable force, paints a glowing fireball along the “G” marker, the weakest point in the dam’s design. The underwater explosion forces a separation between the earth and water, with water momentarily retreating around an expanding “blast bubble” and then rushing back towards a fractured seam, blasting a massive hole in the earthen wall. Slowly the layers of earth are forced out of the way as a relentless avalanche of water and silt carves an ever-widening chasm in the wall of the dam. And in a seemingly never ending torrent, the dam’s 23 billion cubic meters of water begins to barrel through the Missouri river valley, quickly overloading its capacity.

Within minutes the first word of the dam break begins to reach the media and a frantic scramble ensues as media and emergency rescue teams begin to alert everyone living downstream. Since most people are asleep, the job of alerting people becomes immensely more complicated. Telephones banks are hastily assembled with volunteers, farmers, and housewives calling to wake up every person they can find a number for. Only a few small towns lie within the first two hundred miles downstream – Frazer, Oswego, Wolf Point, Poplar, Brockton and Culbertson. These towns are quickly and totally destroyed and the death toll begins to mount.

Crossing the North Dakota border, the Fort Peck waters combine with the raging waters of the Yellowstone River to wipe out the towns of Buford, Trenton, and Williston.

In approximately four hours, the wall of water collides with the headwaters of Lake Sakakawea formed by Garrison Dam. Garrison Dam, located 70 miles north of Bismarck, North Dakota, is one on the largest dams in the U.S. But its 30 billion cubic meter capacity is suddenly no match to contain the destructive force of Fort Peck’s 23 billion cubic meters of water. And the Garrison dam also crumbles, this time destroying Garrison’s major hydroelectric power plant. The hydroelectric plant in Fort Peck survives, but by now has also stopped because it has run out of water.

The destructive water mass starts moving towards the more populated areas. The first significant city in its sights is Bismarck, North Dakota’s state capital, with a population base of about 100,000 people. Near daylight, panic hits the streets of Bismarck with residents frantically trying to grab belongings, locate friends and family members, and head for higher ground. Emergency vehicles with sirens and PA systems patrol the streets to wake and alert all residents. Keep in mind that the power has been cut off roughly one hour before the water hits. Most forms of communication have been incapacitated.

As the water mass hits the city, it mercilessly rips a path of death and destruction. The first media coverage of the destruction in Bismarck in the daylight hours signals an impending doom for all of the cities downstream. And suddenly the whole nation begins to panic.

Approximately four hours after the Garrison dam burst, the wall of destruction hits the waters of the Lake Oahe formed by the Oahe dam in Pierre, South Dakota. The Oahe dam holds 29 billion cubic meters of water, and is instantly crushed under the massive flood.

At this point, three of the largest dams in the country have been crushed, and the cumulative water mass now totals over 100 billion cubic meters of water, not counting the millions of tons of dirt and debris stirred up as the raging water carves an ever widening channel through the river valley. A second state capital, Pierre, South Dakota is crushed. And another major hydroelectric plant is destroyed.

Approximately 15 hours after the dam burst in Fort Peck the raging waters carve through another significant city – Sioux City, Iowa, with about 100,000 people. And about two hours later it collides with the first major city – Omaha, Nebraska with a metro population exceeding 800,000 people.

The water mass is now so large that all tributary channels back up for many miles creating far-reaching fingers of destruction. Millions of acres of land becomes flooded with water, soon receding as the water continuously seeks room for its bulging capacity.

Shortly before the end of the first day, the waters reach Kansas City, with a metro area population exceeding one million people.

With more that adequate lead time for people to get out of harms way, fatalities are happening more in the outlying areas, and more for reasons of panic than from being in harms way.

The destruction continues on into Memphis, Tennessee, through Arkansas, Mississippi, and on into Louisiana destroying both Baton Rouge, the third state capital, and New Orleans. The water mass hitting New Orleans is roughly half the size of Lake Michigan.

In just a day and a half a massive trail of destruction over three thousand miles long has been ripped through the center of the United States. The country has literally been cut in half with no ground transportation between the two halves. Nearly 15 million people are now homeless and 250,000 people are missing and presumed dead. Major power plants have been destroyed, and restoring power to the whole country will be a long time in coming.

With this single act of destruction, nearly every person on the face of the earth is somehow affected. Five federal reserve banks have been destroyed. Thousands of major companies have been destroyed. The stock market, domestic and international, is thrown into total turmoil. Most insurance companies simply fold up because the losses are too great. Food supply systems, water supply systems, sewer systems, and many other things we take for granted now take years to repair.

The scenario I have just presented was my own creation. Many of the facts have been purposely distorted to prevent anyone from trying this. People at the Corp of Engineers have told me it’s not possible. It may or may not be possible. I have presented this simply to show a sobering example of how everything we know could change over night.

How durable is our lifestyle? How durable is the network of systems that we use to make everything work? Is there another wildcard event that may be equally as destructive?

The Aztec and Inca societies included sophisticated systems for water, transportation, and food. Both were destroyed in wars. The ancient Greeks developed the sciences of physics, mathematics, and astronomy. Today we can walk through the ruins of their temples.

As we plan for our future, let us be mindful of the past. Let us plan for our work to be durable, to survive the challenges of time, changing attitudes, and changing personnel. Let us think long-term not short term.

NOTE: I wrote this scenario on June 6, 1998, over three years before the World Trade Center Bombing.

One government official told me that this scenario has been routed through all levels of government. After 911, I was real nervous about having the article posted online, but I was told it would actually be better to have it in the open because the terrorist have already considered it, and keeping it in the open will make us better prepared and less likely to happen.

The Fort Peck Dam will be nearly impossible to destroy and the dams downstream will be able to contain the water even if something happens.  But there are many other easier targets, so we always need to consider the extreme possibilities.