Are We Alone? The Fallacies and Misguided Thinking behind the Drake Equation 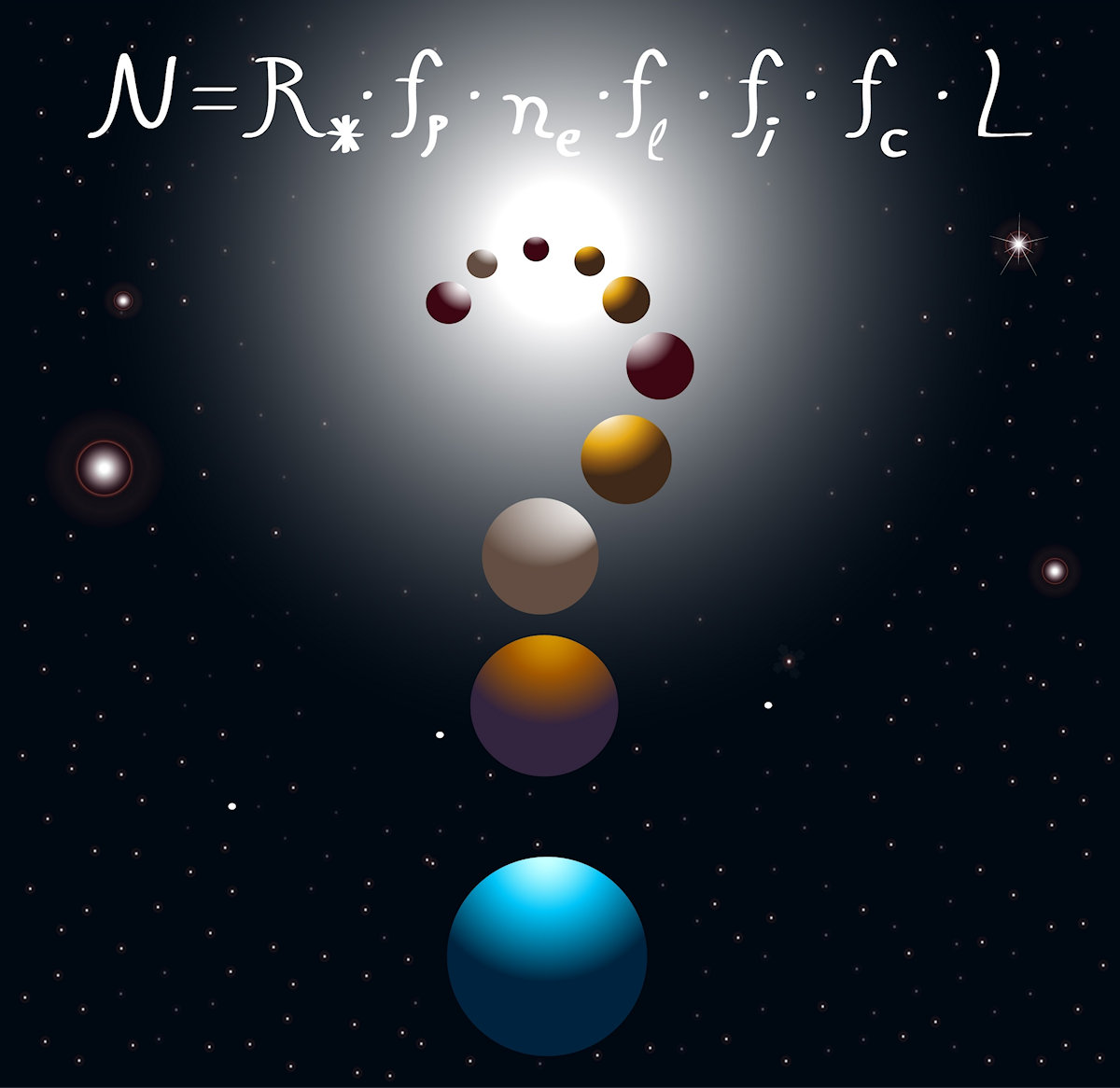 The Drake equation was formulated in 1961 by Dr. Frank Drake, an astronomer and astrophysicist, for purposes of beginning the process of quantifying the number of civilizations that might exist in the universe.

It’s a very imprecise, back-of-the-envelope equation – I doubt he would disagree – that simply multiplies all the factors he deemed important, that would need to be in place for another civilization to come into existence and survive somewhere else in the universe.

While the Drake equation was intended to be a mathematical formula, it is less a string of numeric values than a series of scientific unknowns and vague generalities.

Each of those variables has their own level of uncertainty and, therefore, a wide range of values. Multiplying ranges of uncertainties results in an even greater range of uncertainty, to the point where Drake’s colleagues plugged in the most widely accepted values known at that time and came up with a range of between 20 and 50,000,000 civilizations in the universe capable of human-like communications. I should note that 20 is just that, not 20 million.

As with all good applications of the Scientific Method, Drake put his equation out there so other scientists could tweak it – fine-tuning the numbers, discarding or discounting some variables, and adding others. To his credit, Drake had the courage to try to quantify the unquantifiable – he knew he’d be second-guessed and his primary goal was to get the debate started.

Sure enough, scientists today are still pointing out the fallacies and weaknesses of some of the assumptions within Drake’s equation. Others are zeroing in on the degree of unknowns within many of his variables. They claim this makes the calculation worthless – not only for that reason but the fact that the equation doesn’t help us discover the truth and actually find the hypothetical civilizations.

More simply put, my primary question is whether Drake’s equation is even trying to answer the right question.

Naturally, science has marched on over the past 60 years – an eternity when it comes to the evolution of scientific truths – and while it’s possible to zero in more precisely on some of Drake’s variables, it’s clear today that his version of the equation is simply not meaningful.

Thus, other versions of the equation have been proposed … and I’ve taken a crack at it as well.

Is There Anybody Out There?

These are the factors I would plug into a formula to help us determine the likelihood that our universe has life forms and civilizations similar to ours:
The total number of planets in the universe (use any estimate, because as we’ll see, it really doesn’t matter). Multiply this times:

I’m sure I’m missing other criteria that could be equally critical to defining the true likelihood of faraway civilizations. It’s a fun exercise, though, and it’s a bit mind-blowing to consider all of the unique conditions on planet Earth that need to stay in alignment to support human life.

But the more variables we come up with, the more we find how unique our planet truly is and the less likely it has been replicated to any degree anywhere else. In fact, I’d dare to say the likelihood of finding another planet with human-like aliens approaches zero very quickly.

It’s a predictable cliché, as many people are quick to point out, and rather arrogant and myopic of us to assume there are no civilizations in our universe other than our own. And it’s also natural to assume those beings to be far more benevolent and enlightened than we are.

Similarly, many people would reject my conclusions because they’re too quick to equate “life” with “civilization.” After all, NASA found fossilized bacteria on Mars, so it must be true that there’s civilization somewhere else in this universe. That’s as much of a leap as anything Drake calculated.

I’d be more excited about the possibility of other civilizations in our universe if we had found signs of ancient life on Mars that met the criteria for “living things” established by NASA:

I’d be even more convinced about the existence of other civilizations if these life forms were discovered in the ruins of a community or village.

That brings me to my other major reservation about the Drake equation. It’s asking the wrong question.

Recall that Drake’s peers calculated that the number of advanced civilizations in our universe was between 20 and 50,000,000. Rather than be upset by the massively huge range of uncertainty, I would simply focus on the 20.

No matter what Drake’s equation or more refined iterations, including mine, tell us, we’re not going to discover these civilizations by crunching numbers. N=0 is not the final answer. At least not yet.

To me, the existence of other civilizations is a “yes/no” question, not a “how many” question. And if that’s the case, how do we find the answer? By looking for any one of the 20.

We’ll discover them, if there are any, by exploring – in person eventually but looking and listening for now – and trying to be found. And until we get to “yes” fusing any of these methods together, we’ll have to stick with “probably not.”

Taking this one step further, color me skeptical, but when it comes to finding human-like aliens, the number is definitely zero.