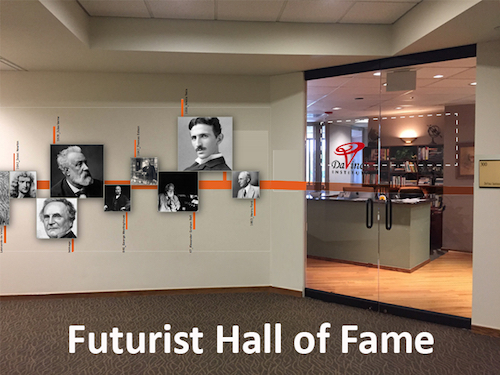 Over the coming months the DaVinci Institute will be unveiling the world’s first Futurist Hall of Fame.

As with other “hall of fame” efforts, this one will be dedicated to drawing attention to those who have contributed the most to our thinking about the future.

To be sure, the first iteration of this Hall of Fame will be meager. It will be a hall with photos and videos not sculptures, homegrown narratives instead of meticulously crafted storylines, and self-guided tours through an online app that we will create in-house.

It will be open to the public during normal business hours, and it will be free.

While we have hopes of growing it into a stand-alone facility with museum-quality displays, our primary focus for now will be to create a respectable starting point along with all of the necessary systems in an organization that will live on into perpetuity.

The initial set of inductees will have one thing in common – they will all be deceased. Once a more formal induction committee and process are in place, many of my esteemed colleagues, alive today, will find their way into the Hall of Fame as well.

We also want to draw attention to the future. Many of today’s technologies, demographic shifts, and political decisions will have dire consequences if we do not do a good job of anticipating and managing their implementation. As our awareness grows, and our technological impact spreads exponentially further, it becomes our responsibility to do an increasingly better job of managing the future.

At the same time, we view this as a celebration of the future. Our future is only as bright as we make it and our efforts to study and analyze the future can put us on the path to a truly brilliant world ahead.

In 1900 the Hall of Fame for Great Americans was opened at Bronx Community College in New York. This was the first “hall of fame” in the U.S. and was based on an earlier concept, the Walhalla Memorial in Bavaria, Germany, which was started decades earlier but completed around 1900.

Since photography was still a poor quality art form with little archival value, both of these museums featured a series of sculpted busts of important people from Germany and the U.S.

Over time the Hall of Fame for Great Americans included displays for 103 people including the likes of George Washington, Susan B. Anthony, Ralph Waldo Emerson, John Adams, Ben Franklin, Edgar Allan Poe, and John Philip Sousa. For a while the term “Hall of Famer” carried greater cachet than “Nobel laureate”

In every case, these museums were designed to highlight the best and the brightest and show the importance of each person’s accomplishments.

Studying the future is less of a defined industry than some, but there are a number of key points that futurists hold in common. Even though there are no unifying credentials or rigidly governed associations that define the theories or philosophies every futurist should espouse, several studies reported by the World Future Society have shown a number of shared points of interest and beliefs among the futures community.

Here is a quick overview of twelve of these “common ground” perspectives: 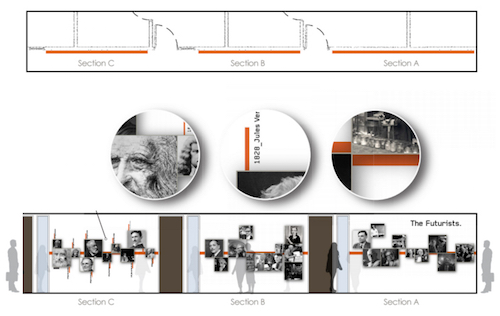 Since the terms “futurist” and “futurology” have only been around since the 1940’s, with only limited usage until the 1980s, few people before then were considered futurists even though many exhibited the same forward thinking qualities.

As an example, Leonardo da Vinci dedicated over 35,000 words and 500 drawings to the concept of flying even though he lived over 300 year before the first hot air balloon flight and 400 years before the Wright Brothers.

Da Vinci is perhaps the world’s best-known futurist even though few describe him in terms other than artist, inventor, and painter.

Consequently there is a significant difference between having a macro-perspective of those displaying big picture foresight capabilities, and micro-perspective thinking about those more directly affiliated with the futurist community.

With that in mind, here are the people that we’d like your input on, as a starting point, for phase one inductees in the Futurist Hall of Fame.

Keep in mind that we are beginning with people who are no longer alive that displayed unusual talent and insight for thinking about the future.

Please leave your thoughts about those you feel should be included or excluded in the comment section below.

This list is in chronological order by date of birth.

Deciding on the first phase of inductees will set the stage for a number of follow-on projects.

Besides asking for your input on the above list, we will be asking key individuals for help to form a long term organization complete with systems and procedures that will keep it operating for centuries to come.

As we are able build out the first phase of the Futurist Hall of Fame, we will keep everyone informed about how this will fit into some of our larger plans for a stand-alone facility.

Please take a moment and let us know your thoughts. Your insights and recommendations are greatly appreciated.

Author of “Communicating with the Future“