All Information, Ever Created, is Still in Existence 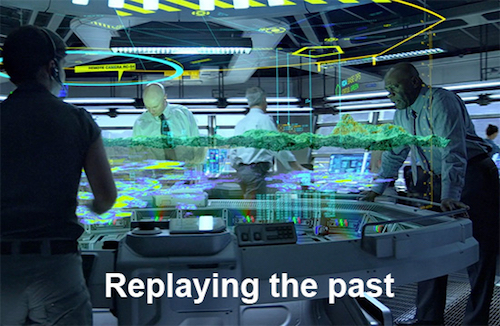 The date is July 14, 1986. Herbert Benson wakes up early, goes down to the kitchen and makes himself a peanut butter sandwich. This is a seemingly trivial incident that happened nearly 30 years ago.

How do we know today that this sandwich-making incident actually happened? Is there any kind of time-space record of it?

Making a nighttime sandwich is a seemingly inconsequential act, but what if Mr. Benson later committed some heinous act like killing a young girl, blowing up a bridge, or shooting the President? In these situations, whatever precedes an extremist act becomes critically important.

Was he alone in the house? Was he making sandwiches for more than one person? Did he add poison to the peanut butter? Why were there sandwich fragments at the crime scene? All of these details are critically important, but will this kind of information ever be accessible?

When we look into space we are actually looking back in time. This is because we are looking at old light traveling towards us at 186,000 miles/second.

We already know that if someone is watching us through a large telescope on the moon, they’re seeing events that happened 1.3 seconds earlier because that’s how long it takes light to get from the earth to the moon.

Similarly, if someone builds a giant telescope on Saturn, they will see things that happened 75-85 minutes earlier, depending on the orbits, because that’s how long it takes light to travel from the earth to Saturn.

Using this as a very crude proof, we already know that information does indeed transcend the here and now, but can we ever access it and reassemble it into a useful form?

From what we know today, it’s not reasonable to think we could send a probe 20 light-years away from the earth just to see what happened 20 years earlier. But there may be other ways to reconstruct these fragments?

If people in the future somehow gain the ability to view past events, how will that change the way we live our lives? What changes would you make if you knew someone from the future might be watching you?

Every sunrise is followed by another sunset. Tides come in and wash back out. Seasons change from summer, fall, winter, spring, and back to summer again. We see trees growing in a repeatable fashion and clouds continually reforming themselves in the skies. Just as it has since the dawn of time, the metronome of life is rhythmically animating the world around us.

These are all things we associate with the movement of time, yet it is a topic we know very little about. From the standpoint of science, our understanding of time exists as a thimble full of wisdom in an ocean full of ignorance.

The earth is constantly radiating information, as is every other star and planet in the universe. At the same time, every living person is also radiating information. Throughout our lives we are spewing information of every kind in every possible direction including visual, audio, aromatic, kinesthetic, vestibular, thermoception, and countless more.

With literally thousands of forms of information traveling away from our bodies every second of every day, we are left with one unanswerable question. Where does it go?

Do these information streams simply get absorbed by everything around us? Does it bounce from one surface to another until it gets imbedded into walls, furniture, plants, and carpet? Or does it simply fade into obscurity?

More importantly, is there any record of it still in existence? My way of calculating this may seem like voodoo science, but with everything in the universe radiating thousands, possibly millions, of forms of information, the probability of at least one form still being recoverable later in time is nearly 100%.

My prediction is that future scientists will someday discover the formula for unlocking the recorded history of our entire universe.

Taking this assumption a few steps further, our ability to track people and events throughout history will unleash countless business, cultural, and societal opportunities in ways that currently cannot even be imagined.

Photo Stitching – This National Geographics photo of one of the largest trees in the world is a combination of 126 separate images blended together to capture the magnitude of this 3,200-year-old giant sequoia in California’s Sierra Nevada

One obvious starting point is to work with existing photo and video recordings.

When photography was first invented around 1826, no one imagined that we would be snapping over a trillion photos a year, but that’s exactly what has happened.

Over the years, photo stitching has evolved to include the blending of side-by-side and even overlapping images into large mosaics rendered into impressively large compositions.

Next generation photo stitching will involve morphing photos forwards and backwards in time using millions of data points, and millions of corollary assumptions, to fill in the information gaps.

Taking photo and video stitching one step further, by adding other data points and information fragments, we may be able to push the time envelope even further. 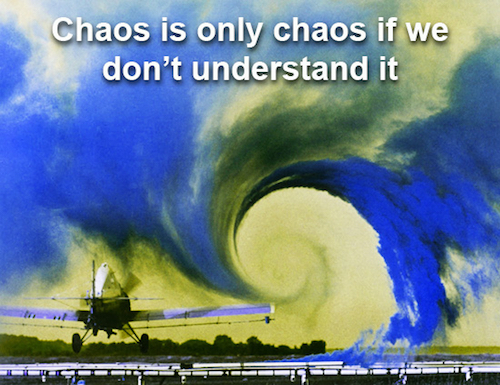 Cause and Effect Relationships

In 1969, chaos theorist Edward Lorenz used the theoretical example of a butterfly’s wings flapping, where that simple movement became the root cause of a hurricane forming several weeks later on the other side of the planet. This has become known as the “butterfly effect.”

This type of cause and effect relationship, in chaos theory, is used to describe a nonlinear system where the true sequence of events is so complex that it can only be sorted out after the fact.

But when it comes to chaos, the only chaos that really exists is our inability to comprehend the underlying cause and effect relationships happening in a hyper-complex world. Chaos is only chaos if we don’t understand it.

Assuming the complexities of chaos will eventually be solved, how will we leverage our newfound capabilities?

When it comes to answering the question of whether or not this technology is even possible, truthfully, I don’t know. But it’s rich fertile territory for exploration.

While this isn’t an exhaustive list, I’ve identified five initial categories of use. These include criminal justice, spying, historical accuracy, biblical research, and genealogy.  Here are a few examples:

Would you rob a bank if you knew somebody could go back and find out exactly who did it? Would you start someone’s house on fire if someone could see you lighting the match? This will be a huge tool in the criminal justice world.

Spy agencies like the NSA will naturally have a heyday deciphering the roles of participants in various forms of espionage.

If this sounds somewhat frightening, rest assured any breakthrough in this area will come in baby steps, and pinpointing anything meaningful across time will require laser-like precision to sort through the murky universe of minutiae.

“I accept chaos, I’m not sure whether it accepts me.” ― Bob Dylan

We’ve often heard the phrase, “hindsight is always 20-20,” but it really isn’t. Even though we’ve all personally experienced our own past, our understanding of the details represents only a tiny fraction of what happened.

Part of me wants to be immersed in the countless details that caused major shifts in my life, as well as the world, to happen. At the same time, there is great danger in knowing too much.

If someone offered to hand me the keys to unlocking the mysteries of my life, these keys would also unlock lots of things I’d rather keep hidden. It raises huge concerns about who or what controls this technology?

Being able to view the past brings with it an awesome responsibility for us to both preserve the integrity of the generations who have gone before us, and not denigrate our contemporaries. We all have the frailties of being human, and good judgment is everybody’s shortcoming at one time or another.

That said I’m very interested in your thoughts. Will this type of technology ever be possible, and do you personally know anyone doing research in this field?

← When Everyone Becomes Blackmailable 2050 and the Future of Infrastructure →