When Everyone Becomes Blackmailable 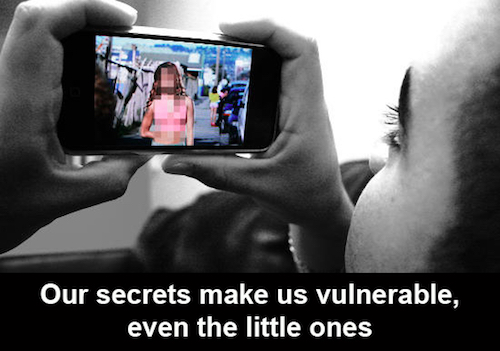 On a recent driving trip, my wife and I became immersed in the audio version of one of Tom Clancy’s last novels titled, “Threat Vector.” Without giving away too much of the plot, a Chinese super-geek villain has hatched a plan to hack into our most secure networks and blackmail people with their darkest secrets to subversively cause chaos and disruption for the American government.

While most good authors have devious ways of thinking like a criminal, Clancy does an exceptional job of crafting this storyline as a plausible threat.

For many of us, our reputation is one of the most important aspects of our lives. It’s central to everything we do.

Every time a TV courtroom drama plays out, whether it’s a trial featuring Eliot Spitzer, Martha Stewart, Clarence Thomas, or Monica Lewinsky, we instantly identify with the most embarrassing pieces of the testimony because it could easily be us. We are all terminally human, with enough of our own character flaws to make us the center character of a juicy reality show.

Recent revelations about the NSA PRISM program make this kind of paranoia even more justifiable. Virtually any person, put under a microscope, can be threatened with his or her own character flaws.

But an even greater danger comes from knowing personal weaknesses, and in most cases, it’s the person or thing we care about most. People seeking leverage always want to know the one button they can push, and whether it’s a child, parent, valuable possession, or their reputation, one well-crafted threat can be instant blackmail.

In much the same way Google’s personalized marketing system delivers targeted ads, an intimidation engine will be capable of delivering highly targeted threats.

As cyber crime escalates, we run the risk of having our social structures deteriorate into invisible mafia-style communities with the blackmailers ruling the blackmailees, and few, if any, capable of understanding the behind-the-scenes turf wars?

Basic Human Right – The Right to be Forgotten

Ever since the European Union’s top court ruled in May that individuals have a “right to be forgotten,” tech companies have been scrambling to comply with the new rules.

Google, as example, has received over 70,000 takedown requests from individuals who want 250,000 webpages removed from Google’s search results. This is requiring tons of human effort and manpower. Each request gets individually reviewed, and Google now plans to hire more staff to handle the extra workload.

But Google is not alone. Virtually every tech company is being forced to rethink their strategy. Not only do people have the “right to be forgotten,” they also have the perceived right to be positively remembered. As a result, we are seeing a massive surge in reputation management and consulting businesses to do just that, clean up our reputation.

Ever since word got out that prospective employers were scanning Facebook and Twitter before hiring someone, people started paying more attention to their online image. But the EU ruling added something akin to turbo boosters to the already fast moving reputation industry.

Reputation experts extend the work of yesterday’s publicists and image consultants deep into the highly nuanced digital world. Firms are now dedicating full-time resources to not only manage things that reflect negatively on a person’s character, but also work overtime to bolster the upside of their virtual rep.

For a fee that can amount to thousands of dollars a month, reputation professionals take on clients and scrub clean their search results with a wide range of techniques, that often include creating search engine-optimized content that dominates the first few pages of specific search results on Google, Bing, and Yahoo.

Clients ranging from CEOs of major corporations, to celebrities, lawyers, doctors, chiropractors, and restaurant owners all use these services to whitewash the negative and amplify the positive. According to media consultant BIA/Kelsey, small and medium-size businesses will spend $3.5 billion managing their online reputations in 2014.

The Need for Blackmail Insurance

Kidnap and ransom insurance, K&R, was first introduced by Lloyd’s of London in 1932 after the kidnapping and murder of Charles Lindbergh’s son. But, the policies didn’t get much attention until the mid-1970s when the famous newspaper heiress Patty Hearst was kidnapped.

Nowadays most large companies include K&R coverage as part of their insurance portfolio, and it’s especially popular among those who plan to expand internationally.

Blackmail is similar to kidnap and ransom because it involves holding someone’s reputation, identity, or family hostage digitally, with threats of harm if the victims fail to comply.

With cyber crime reaching epidemic levels in many parts of the world, most offenders have managed to stay one step ahead of the law. At the same time, cyber crime itself is evolving.

Last week, police in the Philippines arrested 44 Taiwanese who ran an online blackmail syndicate used to defraud victims in China and Taiwan by duping them into thinking their bank accounts had been used by terrorists to launder money.

A recent Ponemon study, that gained attention at the 2014 World Economic Forum, stated the average time to resolve a cyber attack in 2013 was 32 days, with an average cost to participating companies of a little more than $1 million during that timeframe. Compared to 2012, this was a 55% increase over the average cost of $591,780 and 24-days to resolve.

Both the size and scope of these claims represents a huge opportunity for the insurance industry, and blackmail problems will soon be one of the fastest growing of all cyber crimes.

If someone threatened your child, either you deliver $2 million in jewelry and a certified hand-written bill of sale or your child will die, what would you do? Yes this may be an easy scenario to circumvent, but from a criminal standpoint, it only needs to work a small percentage of the time.

After spending several years considering the privacy vs. transparency debate, I see two of the most dangerous implications of our dwindling privacy as:

As we move towards a radically transparent world, where everything is knowable about everyone, we lose our ability to even control our credit cards, bank accounts, and everything we own.

The implications of this are that ownership of anything valuable, can easily be stolen electronically. Since some of our most engaging and influential members of society are also held to a high transparency standard, our desire to know more about them and how they live makes them extremely vulnerable.

So do we run the risk of having society deteriorate into the invisible mafia-style communities with the blackmailers ruling the blackmailees? The answer is yes, unless we act quickly.

From my vantage point, it’s easy to predict us reaching some crisis point in the very near future. A well-publicized incident will cause global outrage, and countries will band together to form an international task force, similar to a Geneva Convention, focused specifically on privacy. The implications of a global privacy task force like this will be huge, with global policing of violators and a dramatic shift in the rules for online business.

But for most of us, it boils down to timing. Without quick intervention, our risk of personally falling victim to some form of blackmail will soon reach 100%.

If you or someone you know has already been the victim of a digital blackmail scheme, please let me know. We are currently trying to compile more statistics in this area.

← The Laws of Exponential Capabilities All Information, Ever Created, is Still in Existence →