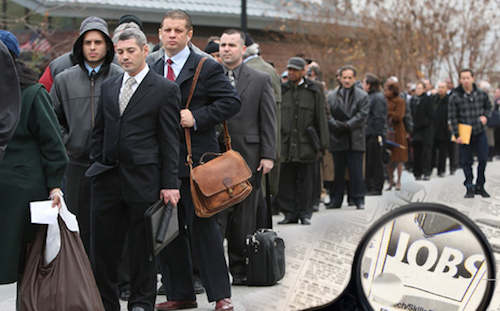 Two hundred years ago, the most stable jobs involved the needs of a community and the work of a skilled craftsman to meet those needs. People holding jobs such as cobblers, blacksmiths, chandlers, and butchers found themselves in high demand.

But those jobs hold very little relevance in today’s world. So is there such a thing as a “forever” job, a position that will endure forever through time? Will we always need policemen, firemen, teachers, farmers, doctors, and nurses, or is it possible that those professions will also go away?

So if we start with the premise that there are no such thing as a forever job, that all jobs will eventually fade into the sunset, we must assume new jobs will be needed to take their place. And with the pace of life constantly speeding up, we must also consider the possibility that jobs will disappear far faster in the future than they do today. If that is the case, we will need a job-creation engine that can equally match or exceed the rate of job decay.

In the future, people will worry far less about how safe their current job is and far more about where there next job will be coming from.

For this reason I would like to suggest a 4-part approach for systematizing a rapid job-creation engine.

Putting it in Perspective

A recent survey conducted by the Women Impacting Public Policy organization concluded that small businesses will account for 93% of all hiring this year. At the same time, money needed for hiring and business expansion has become increasingly hard to get. A recent New York Times survey showed that in the third quarter of 2010, only five percent of small businesses even bothered applying for a loan.

As presidential politics moves into full gear the demand for new jobs will the battle cry heard throughout the country. When you listen to the banter, it’s important to note that the same laws that were devised to protect workers in the past are the same laws that are now preventing companies from hiring in the future.

Hiring people today is a complicated process encumbered with layer upon layer of rules and regulations, and for the company, a seemingly never ending stream of financial obligations. The average U.S. job comes with over $10,000 in hidden obligations that workers generally never see.

My intent, however, is not to assign blame for things done poorly in the past. Rather, the forces of change are demanding new approaches.

From a job-seekers perspective it’s hard to understand, but companies have an obligation to hire the fewest number of people they can get away with. They have made commitments to their shareholders, current staff, and customer base, and these commitments form the boundaries around which the business makes its current decisions.

Any company’s first order of business is to survive, and because of this they have very little latitude for risk-taking. For this reason, the vast majority of all risk-taking in business happens inside the small and early stage companies. They simply have less to lose.

The obvious question to ask is how to channel funding and resources to the risk-takers, and do it in a way that makes sense both for the loaners and the loanees.

As automation and technology continues to eat away at our current job-base, the discussion will change from “do we need to make a change?” to “how quickly can we make it happen?”

The risk of doing nothing will soon outweigh even the high risks of investing in startup businesses. So here is the 4-part approach I would like to propose:

Part One – Create a Standard for the Minimal Fundable Enterprise

In case you hadn’t gotten the memo, there are no ready sources of money for startup ventures. Yes, it may be possible to find private investors or talk family and friends into making an investment, but the time and opportunity costs of obtaining this money puts it out of reach of all but a fractional percentage of startups.

This doesn’t mean there is anything wrong with a particular new business model. Rather, the process is so ill-defined and so non-systematized that few can pilot their way through to launching a functional startup.

The fact remains, when there is no money for the new kids on the block, the advantage goes to the incumbents, and the incumbents aren’t hiring.

So how can we change this?

I would like to propose the idea of establishing a baseline for the “minimal fundable enterprise.” To achieve this status, an aspiring startup will need to orient their thinking around five basic proofs:

With this kind of criteria in place, early stage companies will be able to focus their efforts around achievable targets and better align themselves with funding requirements.

People who are skilled in traditional forms of lending have very little understanding of how to size up and analyze the risks of an early stage startup. Bankers, mortgage brokers, commercial lenders, and even venture capitalists are woefully inadequate for the type of scrutiny and understanding needed to match the resourcefulness, drive, and passion of an individual to the obligations that come from an investment.

For this reason, a new profession is needed – the Seed Capitalist.

The Seed Capitalist will be a hands-on evaluator who works outside the traditional filling-out-forms mindset. They will be tasked with making personal visits to the homes and workplaces of the entrepreneurs and founders, ferreting out salient details of character and initiative that separate the “probables” from “likelies.”

When it comes to resources, Seed Capitalists will have far more than purse strings at their disposal. If a prospect is not yet ready, they will have the ability to suggest and recommend new options, suppliers, and strategies for shoring up whatever deficiencies may currently exist.

On Tuesday I flew to the Washington, DC area to give a talk on the future of libraries, an institution I believe will weather the winds of change better than most if they make the necessary adjustments.

Early stage funding is a sloppy business and even those groomed for picking prime talent will be proven wrong somewhere along the way.

But in the coming world of hyper-change business environments, the need for rapid job-creation will take precedent over virtually all other systems. As a result, a new governmental structure will need to be put into place to guarantee the funds invested by the seed capitalists.

More specifically, this is a system that must remain autonomous and untouched by the SBA and all current bank lending systems. Without this autonomy the whole system will fail.

Startup businesses are becoming very fluid in how they operate, and the driving force behind this liquefaction is a digital network that connects the needs of a company with available talent in a quick and efficient manner.

A business colony is a new kind of business structure serving as an organizational magnet for work projects and the free-agent talent needed to complete the work.

The operation will revolve around some combination of resident people based in a physical facility and a non-resident virtual workforce. Some will forgo the cost of the physical facility completely, opting instead to form around an entirely virtual communications structure.

Most will be organized around a topical area best suited for the talent base of the core team. As an example, a team of photonics engineers will attract projects best suited for that kind of talent. Likewise, a working group of programmers specializing in computer gaming applications will serve as a magnet for new gaming projects.

In some instances, large corporations will launch their own business colonies as a way to expand capability without adding to their headcount. Staffed with a few project managers, the company will use the colony as a proving ground for experimental assignments best performed outside of the cultural bounds of existing workflow.

Colonies will develop their own standard operating procedures with consistent agreements, payment processes, legal structures, management software, and methods for resolving disputes. Over time they will be rated on their ability to complete tasks with specific ratings on efficiency, quality of work, and how well they treat the talent. More on business colonies here.

Putting it All Together

I find the interplay between this four-part approach intriguing. As a newly minted standard, the “minimal fundable enterprise” will give prospective entrepreneurs a reasonable target to hit. The seed capitalists will use it as part of their primary tool kit. With fund guarantees in place, the government will both set the stage for next generation entrepreneurship and benefit from its thriving new tax base. And the business colonies will serve as a boiling cauldron for ideas as aspiring startup founders build their networks and form alliances with talented people who will help build their future companies.

Currently, our governmental systems are evolving at speeds that are exponentially slower than the businesses that use them. With the rapid-fire demands and micro-second shifts in the way business operates today, that needs to change.

Is it actually possible to build a job-creation engine that can exceed the rate of job decay happening around the world?