The Rise of the Cause-Architect 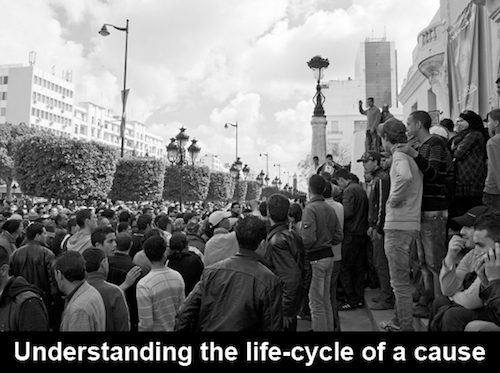 In 1863, Abraham Lincoln signed into law the famous Emancipation Proclamation, an executive order that granted some freedom to slaves. But true freedom was still a century away for those who lived in the black vs. white world leading up to the Civil Rights movement, an effort that began in earnest in the 1950s.

The movement for freeing the slaves was a social cause that tore the country apart, resulting in a civil war and a century’s worth of social scarring that needed to heal before the effort could begin again.

In 1954 the stage was set with a Supreme Court ruling that made school segregation illegal. After years of marches, protests, and demonstrations, the Civil Rights movement peaked in 1963 with Martin Luther King’s famous “I Have a Dream” speech, in front of the Lincoln Memorial in Washington, DC. After a few more tumultuous years of social unrest involving the assassinations of President Kennedy, Bobby Kennedy, and Martin Luther King the movement came to an end in 1968 with the passage of several pieces of legislation aimed at outlawing racial discrimination.

In the past, movements like this were filled with tension and riddled with conflict. But that is quickly changing.

Every cause has a beginning, middle, and end. When deep-seated differences are involved, tensions will rise and fighting will occur. But for most movements, where the stakes are less divisive, society simply adjusts and moves on.

In the fluid society we find ourselves in today, with massive communication systems for organizing and influencing public opinion, social causes are far easier to orchestrate. And this ease with which we can manage a movement is giving rise to a new breed of influencer – the cause-architect.

As our ability to communicate, influence, and organize increases, the likelihood of violence decreases. This also means the life-cycle of most causes today will be far shorter than those of the past. More things happen quicker.

It has also turned the “cause architect,” the key person serving as the movement’s organizer and inspirational leader, into a respected position.

Once we begin to understand the life-cycle of a cause, and the stages of activity that take place at the beginning, middle, and end, leaders can begin to manage far more organized efforts than ever in the past.

Stage One – Launching a New Cause

Whenever there are polarizing differences between two groups of people, there is an opening for a new cause to emerge. In the past, the launching points stemmed from things like poverty and wealth gaps. Today it may be caused by differences in customs, immigration standards, ethics, and values.

However, those ingredients alone do not constitute a movement.

Movements begin with a single event that triggers a significant reaction, something I call a fuse-lighting event. This particular event will begin a chain reaction of other events leading to the creation of a stage-one social movement. For example, the Civil Rights movement grew from the reaction to Rosa Parks, a black woman, riding in the whites-only section of a bus.

In one we know far less about in the U.S., the South African shack dwellers’ movement began because a road blockade was set up in response to the sudden selling off of a small piece of land promised for housing to a developer.

Typically, social movements are created around some charismatic leader with the right combination of skills to both engineer and execute a strategy, and organize and manage a following.

After the social movement sees its first sparks of activity, there are two likely phases of recruitment. The first phase will gather the people deeply interested in the primary goal and ideal of the movement. The second wave of recruits will usually come after the movement has had some success and becomes trendy. The later recruits typically don’t stick around very long.

Many movements fall apart because they are not focused around any kind of success strategy. If there is an implicit demand for change, there needs to be a clear description of what that change will look like.

The most successful movements will develop a series of benchmarks to help measure progress along the way. And they will not succeed if the whole effort is simply oriented around a need.

Tomorrow’s tools will allow us to micro-analyze virtually any situation and find the primary inflection points where a change can be most effective, and good metrics can be put into place. If the metrics are measurable, progress can be tracked.

In the past, people with a big heart, who dedicate their lives to helping the needy, were held in high esteem. It was a virtuous life filled with personal fulfillment. In the future, an even greater virtue will be bestowed upon those who are capable of solving the predicaments that create the needy class in the first place. Cause architects will extend their work far beyond working with the disadvantaged, and set out to wrestle social injustice to the ground. Cause architecture will become an exciting new profession well suited for inspired young people who both want to make a name for themselves and live a life of meaning.

The best cause architects will be the ones who continually work themselves out of a job. Their role will be to construct a realistic action plan, execute, and complete the process of solving major social problems.

Future cause architects will come armed with tools unimaginable by today’s standards, as well as tools they invent along the way.

However, the most important element in the whole equation comes with knowing when it’s over. Asking for too much is as bad as asking for too little. A good cause architect will know when they’ve reached the point of diminishing returns.

Causes represent a natural system for checks and balances. Done correctly they can be a very effective tools for righting social wrongs and correcting the excesses of government and the political system.

The reason why movements are not used more often is because they’re messy. In a social setting with lots of moving parts, it’s very challenging to find the right way to puzzle everything together and make something significant happen.

But that’s about to change.

With the right tools, a cause architect can be very effective in bringing about change quickly. People with money will find a change-agent with a plan very attractive.

Philanthropists aspire to a higher calling. They don’t want to just fund the needy, they want to change the outcome of the poor. And they are far more likely to funnel money through someone who understands what success looks like.

← When Wikipedia No Longer Matters Building a Rapid Job-Creation Engine →