By 2030 over 50 Percent of Colleges will Collapse

In 1791 when Mozart died, his 29-year-old wife, Constanze Weber, was forced to earn a living, so she began selling her late husband’s manuscripts and turned the former messy paper scraps lying around the house into a tidy income stream.

Lucky for her, she lived after Gutenberg’s printing revolution had begun in Europe allowing her to leverage the power of rapid reproducibility.

Over time, the music industry has figured out many different formats for reproducing music, moving from sheet music, to Edison’s cylinder phonograph, to vinyl records, to 8-track tapes, and eventually to downloadable digital recordings.

During those same 200+ years, colleges have done little to reproduce and distribute college courses, choosing instead to redo each college class, much like ancient monks reproducing the scrolls of history.

When demand for education increased, they simply built more colleges, thousands of them, in fact, all over the world. This is analogous to forcing people to go to concerts and other live venues to listen to music.

Over the coming decades, the amount of education we consume to stay competitive will increase exponentially.

However, the education we “buy” will increasingly be on “our terms” not on theirs. We will want education that is relative, timely, available on-demand, and fits within a specific need. And it will need to be far more affordable.

For these reasons and more, which I’ll explain below, we will begin to see the mass failure of traditional colleges. But out of this will come an entire new education era unlike anything we have ever seen.

Over the past decade, the number of people reading printed newspapers, visiting retail stores, and using direct mail have fallen sharply.

At the same time, the amount of news consumed on a daily basis has risen sharply, the overall level of retail sales has continued to increase, and person-to-person communications through email, social media, texting, and other forms of digital communications has exploded around us.

Each industry has forged its own unique path into the digital age.

Several driving forces are causing the world of higher ed to feel the ground shift beneath its feet. Consider the following metrics:

The Seeds of Discontent
Shifting Trends
According to Andrew Ng, founder of Coursera, “When one professor can teach 50,000 people, it alters the economics of education.” 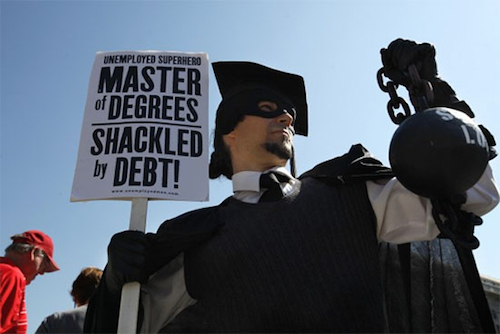 There’s a big difference between affordability and financeability. Until now, colleges have had a relatively easy time selling a student on getting an education today in exchange for some unknown monthly payment to be determined later.

Hundreds if not thousands of studies have been commissioned over the years to support the value of higher education, and students on the fence are quickly overwhelmed with evidence that they’re making the right decision.

In fact, the anti-education crowd is very small, and those questioning the cost of education have only become vocal during the past few years.

The “education industrial complex” is perhaps the most influential in the world, with everyone from Presidents and world leaders, to Nobel Laureates, to CEOs and business executives all unwavering in their support of colleges and their accomplishments.

Yet for the lowly student sitting at home with $100,000 in debt and the only job available to them is one that doesn’t require a college degree, the entire system begins to feel like a house of lies, with festering levels of anger working their way to the top.

Over the coming months this seething cauldron of discontent will begin to erupt in unusual ways.

So what happens when the legacy power of an institution meets a rapidly changing business environment driven by emerging technology? Some will survive but many will not.

For this reason I’ve decided to focus in on eight core issues for colleges that will drive a wedge between business-as-usual and the unstoppable forces of change.

Ironically, we are entering into a period where the demand for education will rise substantially. Yet traditional colleges are such a mismatch for what future consumers will want that dropping enrollments will cause many to fail.

At the same time many new opportunities will begin to surface, and future-learning centers will make use of former college facilities. Some may even resurrect the former institution under an entirely new business model.

With several new alternative education options arising, many colleges will begin to experience a decline in their enrollment. When revenues run short, the first instinct will be to arrange short term financing. This coupled with long term bonds and other obligation will create a growing mountain of debt.

As less expensive schools with extensive online capabilities begin to “steal” students, several colleges will engage in a pricing war to “keep their numbers up.” Many will spend heavily on marketing to change their image and boost enrollment. Others will spend heavily on lobbyists in hopes of gaining more support from government.

How many colleges that experience a 10% decline in enrollment/revenue per year, will still be around after 5 years?

In the business world, declining metrics like this are referred to as a “death spiral.” How long will it take before dramatic changes are made? At what point will layoffs begin, assets be sold, or mergers be considered?

How many colleges or universities will have the ability to reinvent themselves as this is occurring?

Imagine coming across a job opening that requires a specific certification you currently don’t have. You match up well will all of the other job requirements but you’re only missing this one certification.

A few clicks later you find out the certification can happen online with 20 hours of training. So you spend your weekend getting certified.

Yes, there’s a big difference between having a cursory understanding of a topic and working level proficiency. But for many of us our future careers will hinge on situations like the scenario I just described.

As a society we’ve grown complacent, thinking smart people in colleges are doing a good job preparing our kids for the future. Yet higher ed has become a lumbering giant, slow to adapt and increasingly out of sync with the needs of business and society.

The same top-down institutional systems that have preserved colleges for centuries are now becoming their greatest enemy.

Much as failed golf courses, big box retailers, and shopping centers end up in the laps of local communities, failed colleges will also become local problems for city governments to deal with.

Pedestrian campuses that worked well during peak enrollment have a way of becoming white elephants for whatever comes next.

Over the coming weeks I’ll be focusing on “what’s next” for colleges and universities. With the right transitioning effort, the downside may not be as dismal as what I’m predicting.

At the same time I’d love to hear your thoughts.