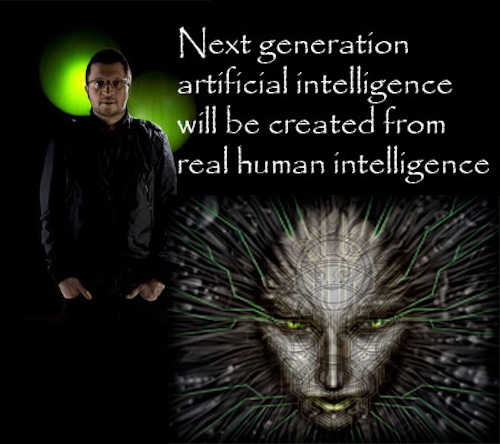 Artificial intelligence in the past has been a top-down exercise of simulating the actions and behaviors of people. Given the wide range of decision-making processes that the average person uses in their day to day activities, the problem-sets that needed to be solved in order to replicate all of the possibilities became staggeringly impossible.

However, the online world has given us insight into some new approaches for developing artificial thought, and these new approaches center around the concept of capturing real pieces of human intelligence.

A few years ago I was involved in a search engine research project where we were studying the connection between a search phrase and the resulting website that the person was looking for. In analyzing the path that began with the typing-in of the search phrase, and watching the discernment process unfold, with inappropriate sites being discarded before a final destination was chosen, it became clear that the search path was layered with huge amounts of valuable data that should be captured and dissected for later use.

The information fragments that we were capturing were not merely data points along a line; we were capturing actual pieces of real human intelligence. Since real people were making the link between the search terms and the destination site, albeit a primitive association, it was indeed a useful nugget of human thinking.

Throughout history we have been fascinated by the way people think. Countless surveys have been done to determine opinions, preferences, and ultimately the salability of a product. But most surveys are done either after the fact or by posing a “what if” scenario to determine personal preferences. Since there is a significant delay between the survey answer and the time that an actual decision is made, the survey information can only be considered a rough approximation.

Perhaps the best way to explain the capturing of real human intelligence involves the music player of the future. Since music is a very integral part of our lives, we can all relate to the power of listening to the right song at just the right time. But, for each of us, the “right song” is a very different song.

The ultimate music player will do just this. It will be able to assess your mood, your likes and dislikes, whether you’re doing something that requires you to be physically active or just sitting comfortably in a chair, and it will read your response to the music. The ultimate music player will measure your heartbeat, brainwaves, biorhythms, stress levels, circadian rhythms, and a few other sensory inputs we haven’t even invented yet.

The ultimate music player will only serve up songs that your body has a positive response to.

This kind of technology will take your mind and mental clarity to a whole new level. It will energize you and at the same time, relax you. It will give you motivation, endurance, and determination. In short, it will give you a reason to bound out of bed every morning to tackle a shining new day.

This type of device will be based on creating a technology with the ability to capture pieces of real human intelligence in real time. It will be a learning device, adjusting to changes, accommodating for different situations, playing music at just the right volume at just the right time.

This gives you an idea of why the capturing of human intelligence is so important. And it also gives you some clues as to the trends this type of technology will inspire.

Until now, people controlled machines with a few adjustments for personal preference. Next generation machines will be able to read our reaction, and serve up products or services that fit our present state of mind.

Imagine a food machine that only prepares the food that you are currently in the mood for. Imagine a computer that only serves up the information you want at the time you want it. Imagine a spa device that takes you to that perfect Zen state and leaves you there for exactly the right amount of time.

A new breed of product developers will soon begin to fashion learning machines that interface directly with the human response system, anticipating desires, and optimizing the abilities of the people using them. And we will pay dearly to own them.