When Our Data Leaves Us Naked 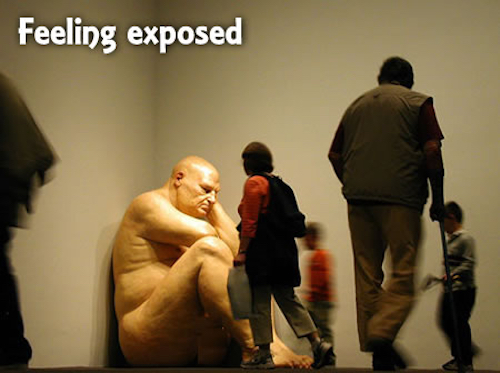 Will the convergence of search technology and RFID chips improve our lives or forever put us in a fishbowl for all to see?

Has this ever happened to you?

Over the years, my eyes have grown progressively myopic. I don’t mind my fuzzy view of things distant. My short range vision is still nearly perfect. Just need the specs for driving. Wouldn’t you know it? I step away from my computer and a moment later discover my glasses magically vanished. (For me, the glasses disappearing act, similar to losing socks in a dryer, is a recurring annoyance.)

Now, several days later, I’m still looking and my imagination has shifted into full gear, conjuring up thoughts of a sinister KGB plot to mess with my head.

I wish I were looking for something online. I could simply turn to a search engine, type in a few words, and on a good day find my subject.  But we have no search engines for the physical world.  Not yet.

Search technology experts have been hard at work on this problem of the chronically missing glasses. Concentrating on developing algorithms for finding digital information in what we know and understand as today’s version of digital information, the experts are making progress but are not to the point of locating objects with a Google search.  In the future, everything will have the potential to be summoned by search as every physical object is reduced to its digital attributes.

“Spychips,” authored by Harvard’s Katharine Albrecht and Liz McIntyre, examines the emerging problems associated with RFID chips.  RFID chips are the tiny signal-emitting chips that are being added to products in the marketplace. One day the sunglasses you buy will be tracked from the manufacturer, to the distribution center, to the store shelves and beyond.

The Spychips author’s foresee an Orwellian nightmare in which all physical products that we buy will have embedded RFID tags. In turn, we will lose all privacy as governments and others track our every movement, at every moment, every day.

Though the authors describe well the evil this technology can do in the wrong hands, they pay scant attention to the overall usefulness and positive side of advancing the science.

Personally, I wish I had an RFID chip on my glasses right now. I would be able to say to my computer: “Hey good friend, where are my glasses?”  Spychip’s authors dwell on the sinister aspects, imagining spies around every corner watching and asking questions – like: “Why did Cheryl Jones drive to the blue house on Elm Street while she was supposed to be at work?”

Some perspective: there is a downside to all new technology, and every piece of technology we invent can be used for evil instead of good.  As an example, I can use a book to kill someone by repeatedly hitting them over the head with it.  But I’m really not in favor of banning books just because that potential exists.

While I do share concerns for the potential misuse of RFID technology, I’m much more inclined to think that the problems simply create additional opportunities for solving the problems, rather than thinking that our only option is to reach for the “kill switch.”

History has shown that whenever there has been an attempt to ban or eliminate a technology, it only delayed development.  The drive for creation is relentless and inevitable.  In the push toward Bill Gates’ ubiquitous computer, there seems little doubt progress can be halted. Sooner or later someone else will step up to the challenge and work on creating an even better, faster, cheaper version of the technology.

It’s important to understand that RFID technology is only an interim step.  As I had mentioned earlier, we will eventually be able to use search engines to find any physical objects.

“It depends on your perspective”

Many years ago the famed father of fractal geometry, and gifted mathematician, Benoit Mandelbrot was presented with the question “What is the distance around a lake?”  His response was “It depends on your perspective.”

If you look at a lake on a map from 100,000-foot altitude, it’s very easy to draw a line around the lake and measure the distance.  If you look at a similar map from 8,000-foot altitude you will notice many more bays and inlets that weren’t visible from the higher altitude, and drawing a line around the lake will yield a much greater distance.  As you approach, more and more detail becomes visible and the distance continues to increase until the line is drawn around clumps of dirt, and then grains of sand, and eventually individual molecules.

The distance around a lake approaches infinity.

The Mandelbrot perspective has far reaching implications.  As we develop the technology for seeing finer and finer particles, we will also be able to define physical objects in unique and different ways. Just an aside, Stanford and others are bringing us views of smaller and smaller objects, but eventually we’ll be staring at objects even smaller than photons. Keep working on that magic, Stanford. I want to see the elusive electron up close and personal.

The technology is inevitable and will likely be developed sometime within the next generation.  But as with all new technology, once the early stages of the technology are introduced, engineering advisors and policymakers will seek to minimize the potential for misuse and abuse.

The privacy issue is one that cannot be viewed from the myopic privacy-is-the-only-thing-that’s-important perspective.  Privacy cannot be viewed in isolation without considering how it affects security and convenience.  There is a three-way tension between privacy, security, and convenience and one cannot be changed without affecting the other two.

The balance of power is teetering between the forces of well-intentioned people.

When privacy becomes too dominant, security and convenience become more difficult.  Similarly, when security becomes overpowering, privacy and convenience decrease.  The goal with this type of equation is to build well-balanced systems where boundaries are properly drawn and no one issue dominates the social and business landscape.

All new technology is introduced in what best can be described as a lawless Wild West stage.  Typically the technology is poorly defined and poorly understood and for an initial time period the developing industry is self-regulated.  Over time, as revenue streams and competition increase, an official public policy piece will come into play and help define the playing field.

However, one of the difficulties associated with modern technology is that we are creating borderless economies, and an individual nation’s sovereignty over a specific piece of technology, and its ability to regulate it, is confusing at best. This is an issue that will get messier before it gets better.

A global economy is emerging with strong interrelated cause and effect relationships coming into play.  But not all of them are well understood.  It makes the policy and regulatory end of the spectrum more difficult, but it makes the idea of placing a ban on certain technologies completely impossible.

My goal today is to simply find my glasses.  I don’t know enough yet to register my glasses with their own distinct IP address, so today’s search technology in this matter really is of little benefit.

Perhaps in 10 years I will all be able to search and find physical objects online as I have written about in the past, but that will be far too late for this desperately needed pair of spectacles.