City of the Future – Part One 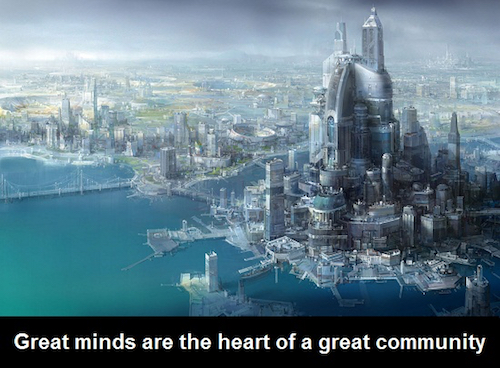 In the future, communities will be designed around ways to stimulate new ideas using such things as creative environments, imagination sparkers, and inspirational architecture.

Yet, at the same time, there is a diminishing value to physical proximity. In the middle of this relationship, with all things proximate, is where we can begin to comprehend how cities are changing, and how they will continue to change in the future. 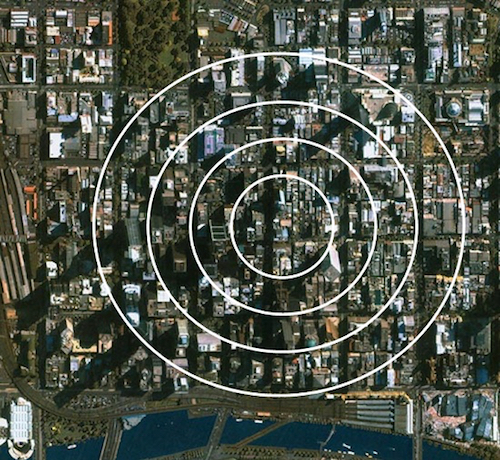 To understand the city of the future, we must first understand the importance of proximity. As we try to uncover the driving forces of change, we need to look at the changing dynamic of our personal relationship with the physical community we find ourselves in.

In the past, we decided where to live, work, and conduct business based on how close we were to key assets. Very often that decision was based on things like:

However, our need for physical proximity is changing.

We live in an increasingly interconnected society and, at the same time, an increasingly mobile society. Our ability to communicate instantly on a thousand different levels with people all over the world, coupled with an increasingly efficient travel network to drive or fly great distances causes us to place lesser importance on the community around us.

With more and more people figuring out ways to work from their homes, either through remote employment, project-based work, home-based or Internet-based businesses, their relationship with their physical community changes.

When thinking about the city of the future, jobs and income streams are not the only consideration. But that is where we will begin.

The city of the future will form around eight dimensions of human connectedness, the interface created between people and their surrounding community. A well-connected community will be a vibrant community where ideas are exchanged, energies are exchanged, and people become extremely loyal to the networks that connect them to the rest of the world. While it is now easy to communicate with people all over the world, we can only physically interact with people and places locally.

Human connectedness involves much more than just communication. And it’s not just about business life, family life, or what we do for entertainment. It is all of that and much more.

For the purposed of this discussion, we will look at human connectedness from eight different perspectives, with the final part looking at the role of city government and how it is adapting within these parameters. 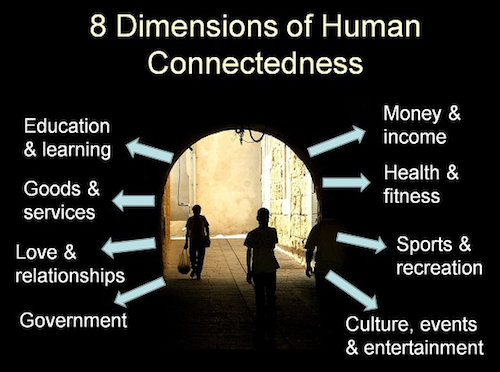 Every dimension of human connectedness is an information sphere that requires its own unique user interface.

There are many ways to look at the human interface, but for the purposes of this analysis, our dimensions of human connectedness have been divided into the following eight categories:

Before going into each of these areas in more detail, one of the key drivers is our move into an increasingly fluid society.

Flowing to Areas of Least Resistance

With transportation becoming easier, making us a more mobile society, and with cell phones and the Internet speeding up our digital communications, our cities are becoming a much more fluid environment.

Much like water that flows downhill using the path of least resistance, businesses and social structures have begun to move from areas we find less appealing to areas that are more appealing.

Using this line of thinking, we can envision many decision points where transitions are starting to occur:

We buy where it is easy, we eat where it’s convenient, and we relax where it is comfortable.

It is easy to dismiss all this as general laziness. But it gets to a far more fundamental motivation driving human behavior – respect.

For each of us we set our minimum quality standards, and once those have been met we look for other attributes such as convenience, friendliness, and speed. When we hear words like “complicated,” “arduous,” or “painful” we tend to run the other direction.

We spend our time, our attention, and our money where it is most respected.

Unbeknownst to most, the 8,000 pound gorilla hovering in the background of our economy is the shifting population base. Any fluctuation in the number of consumers changes the demand-side of the supply and demand equation.

But a strange thing happened along the way. As doom and gloom predictions started painting scary scenarios of an overpopulated earth where food shortages threatened the very existence of humanity, the full impact of birth control technology, invented in the 1960s, began to take effect.

Today, the population in the U.S. has begun to level off, while at the same time nearly all of Europe and major parts of Asia are in serious decline. Since people create the economy, the lack of people creates just the opposite. This drop in demand will manifest itself in many areas, including a drop in the demand for real estate, as well as other goods and services.

The Coming Free Agent Workforce – According to Daniel Pink, author of Free Agent Nation, “In the past, the standard working arrangement was that employees gave loyalty and the organization gave security. However, that bargain is now kaput.”

Analyst Christopher Dwyer of Aberdeen Group estimates freelance workers already make up 20% of the labor force, a figure that will rise to 25% as early as next year.

Steve Armstrong, operations manager for Kelly Services believes the expanding use of contract workers, is at least partly fueled by some Americans who see more flexibility, and even security, in freelancing it. He see young workers who saw their parents lose jobs the past couple of years take on more of a free-agent mentality.

Since September, the number of workers taking temp jobs has risen by 404,000, making up 68% of the 593,000 jobs added by private employers, according to the Bureau of Labor Statistics. At the same time, many laid-off workers who have been unable to land a permanent job, have transitioned over to independent contractors and consultants.

The Coming Surge of Entrepreneurship – At the same time that free agents are becoming a business-of-one, we are seeing a much larger wave of entrepreneurial activity.

Traditionally it could be predicted that for every 100 people who join the ranks of the jobless, seven would attempt to start their own business. Some find business niches, others invent and still others find a better way to do something markets are already craving. Ingenuity and daring often are the catalyst for setting business and commerce in motion. Though nothing stimulates the entrepreneurial mind like the lure of cash, but this time there is little to be found.

However, entrepreneurs are not ones to accept “no” for an answer. The online digital world is an engine that requires little startup capital. Profitability for a new online business can often be achieved even for those with little or no money. For this reason there is little wonder why more and more talent is shifting away from physical products toward the online marketplace.

Starting a business in the physical world requires permits, inspections, licensing, tax collection, and monitoring. Constant monitoring. Time delays can often drag on for months. Cities have acted as the perennial gatekeeper and their relationship with the business community is often described as adversarial.

However, in the digital world there are few gatekeepers, and the time it takes to be up an operating is measured in minutes and hours, not months and years. Yes, there may be a requirement for licensing and tax collection, but it tends to be far less painful.

People have a choice, and when they weigh their options between a physical business or a digital one, most often the digital option comes out on top.

As the business world shifts away from bricks and mortar, cities are left with little to claim as their own, and, with a declining sale tax base, very little revenue to pay for the services the residents have long come to expect.

Business Colonies – In the future, businesses will operate in a far more fluid manner with talent and projects converging for short periods of time. In much the same way the movie industry works, where a single movie project will attract camera people, script writers, lighting and sound people, actors, and makeup artists, future business projects will attract various skills for temporary assignment. Once the project is complete, team members will disband and form around other projects.

Operating as a free agent often involves a number of challenges that not all are equipped to handle. As a support mechanism for their growing numbers, business colonies will begin to form around such diverse industrial sectors as photonics, nanotech, biotech, IT niches and many more.

Often times the colonies will be formed to support large corporate players in a specific industry. As an example, companies like Sony, Microsoft and Nintendo could easily spawn gamer colonies as a way to drive the development of new games for their consoles.

Over the next few years, experimental colonies will proliferate, testing a variety of operational and support systems. Free agents who join as members of the colony will be attracted by the prospects of steady project flow. Project leads will be drawn to the available talent pools. And host cities will be most interested in generating jobs and employment for their constituencies.

Future of Economic Development – The current efforts most communities are now using to attract companies to relocate into their city will need to be re-thought.

As the number of people telecommuting increases, there are little assurances that the relocation of a company will bring many of its people along with it. Yes, many of the old school employers still require all of their workers to show up in the office every day, but even those who are most determined to resist this trend are showing signs of softening.

According to the Telework Research Network, 40% of U.S. employees hold jobs that that could be done at home (50 million), and half of all U.S. businesses are home-based (16 million).

Alternatively, instead of focusing on the whole company, economic development professionals may want to focus on recruiting key individuals who have the option to live anywhere. Many people who telecommute bring with them two essential ingredients – a budget and hiring authority. In the future, any person who can choose where they want to live, and comes with a budget and hiring authority, will become a prime target in the new age of economic development.