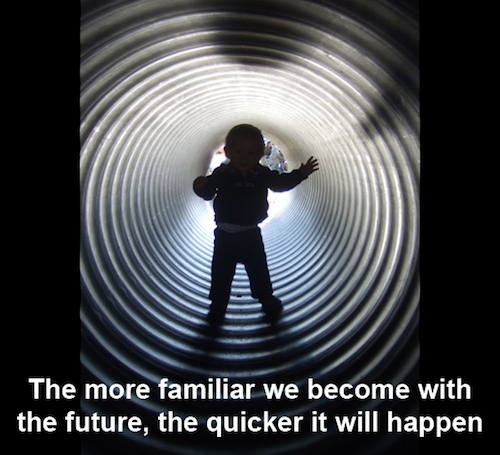 The first time a person gets into a car and drives to some place new, the discovery process causes a heightened sense of awareness and the perception that time has slowed down. Each subsequent trip to that same destination involves fewer discoveries, less awareness, and the perception of less time spent to get there.

After enough trips, our brain goes on autopilot, and our sense of time collapses even further.

The “Familiarity Contraction Principle” is a concept that explains the perceived reduction in time, but also explains how our familiarity with a specific outcome or end goal will increase both the likelihood that it will happen, and the efficiency with which it will occur.

As we increase the body of information surrounding a specific aspect of the future, we increase our familiarity with it. Our ability to plan and manage our own future is directly related to how familiar we are with it, and that is where we can begin to uncover some truly profound insights.

First a little background. The idea of the Familiarity Contraction Principle was initially proposed by Drew Crouch, a good friend and inspiring top-level executive at Ball Aerospace, during one of our monthly meetings where we set out to solve some of the great problems of the world.

Our initial discussion was surrounding the perceived reduction in driving time, but upon further reflection, the implications began to grow.

Side Note:  The only known exception to this rule is driving through Kansas. For some reason, Kansas is a state that doesn’t let your brain go onto autopilot, and each trip is as long as the first. Maybe even longer. But I digress…

As you will soon see, familiarity is an enormously valuable tool that can be applied to countless situations.

Example #1: When entering a dark room, your first instincts are to search for cues. If there is a small amount of light, our impulse is to look for visual cues. Once we’ve decided how much we can rely on visual information we move on to our other senses, looking for auditory signals, smells, things we can touch, and perhaps even taste.

If it is a room we have been in before, we quickly race through our memory cells to correlate known information with whatever new information we are uncovering.

Once we reach the other side of the room, we have methodically logged everything we found to be pertinent, so any subsequent trip can take place in far less time.

The speed with which we can move through a dark room is directly related to how familiar we are with it.

Example #2: A person who works on an assembly line is well aware of the efficiencies that can be gained through repetition.

The craftsmen who work on building clocks gain tremendous efficiency between the first time a clock is built and the hundredth time. After multiple iterations of the same routine, the assembly person instinctively knows where to reach for each subsequent part. They learn how best to grasp and position the new parts to insure the gears are aligned and components are properly seated.

Over time the movements become fluid and instinctive. There is little brainpower needed for each new assembly as the brain shifts into autopilot and the person doing the work simply “zones out,” letting their mind wander as their body simply goes through the motions.

Every manufacturing plant manager is well aware of the value of familiarity.

Example #3: When children are first introduced to the alphabet, they are shown the letters repeatedly to improve “familiarity” between the character shape and the corresponding sounds used to form words.

The slow methodical process of connecting brain cell to brain cell is an exercise in familiarity-building and also an essential part of learning.

Over time the micro-decisions needed to distinguish characters becomes second nature and our brain jumps quickly past the individual letters and only sees the character groupings as complete words.

Here are a couple other ways forces associated with familiarity have been demonstrated:

Familiarity – Not Just About the Past

Contrary to popular thinking, familiarity is not just about the past. Rather, our ability to develop a greater level of awareness about the future can give us a significant competitive advantage.

Every vision of the future begins as a vague concept. If there is enough meat-on-the-bones the idea will begin to grow. But the traditional path for letting ideas grow by themselves tends to be extraordinarily slow. Weeks turn into months and months often turn into decades as ideas languish in their own inability to reach the minds that most need them.

In much the same way a bad food system fails to provide the needed food and nourishment to starving people in remote areas, our idea network has suffered from broken patterns and constant disconnects.

An idea left to survive on its own has little chance of surviving. But an idea combined with hundreds or even thousands of similar or related ideas can quickly reach the point of critical mass.

The Future as a Framework

Done correctly, idea clusters create their own center of gravity. If we create a vision of the future and couple it with the right mechanisms for attracting other ideas, suddenly it takes on a life of its own.

To better illustrate this concept, think of some future concept as a piece of papier-mâché that starts with a wire framework. Each new idea serves as another piece of paper added to the frame, giving it mass, dimension, and realism. Over time the original collection of wires becomes a visual, touchable finished work that we can both physically and intellectually interact with.

Similarly, if we start with some future concept and start telling stories about it, adding illustrations, animations, videos, surveys, and interviews, the entire body of work surrounding the original idea creates its own gravitational pull, making it what I like to call an “attractor.”

An “attractor” is an idea that has reached critical mass. We are being drawn towards it.  Future events such as putting a man on Mars, finding a cure for cancer, developing a fusion energy reactor, or inventing a mass-market flying car are all well-known endpoints that have become staples of our culture, and a common theme in media as well as the global conversation. In our daily lives we often discuss these attractors without any awareness that the mere discussion of the topic reinforces its role as an attractor.

Attractionary Futuristics is the science of attractors where the effect that a known future event is having on present-day research is being studied. This is an emerging new science that I am involved in developing at the DaVinci Institute. Our research is currently being focused on identifying known attractors, the creation of new attractors, categories of attractors, range of influence, intensity of the attraction, and the directional vectors of these forces. An example of an attractor in the nanotech field is the creation of the ultimate small data storage particle and the effect it will on the information world.

Past visionaries have given us the mental pictures we hold today of the future.  Sometimes these visions come in the form of illustrations or artwork, other times in movies or video clips, but very often they start as nothing more than an idea tucked into the middle of some book or article that the author mentions in passing.

One good illustration of this is DaVinci’s artwork. During his lifetime, Leonardo DaVinci dedicated over 500 drawings and 35,000 words to the concept of flying.  He used the tools at his disposal to convey the idea that flying would someday become both viable and practical.  His ideas managed to survive the centuries and eventually came to life, first in the form of Joseph and Jacques Etienne Montgolfier’s hot air balloon, and later with the Wright Brother’s flying machine in 1903 at Kitty Hawk, NC. Even though communication systems were crude, the DaVinci drawings served as a source of inspiration and as a blueprint of sorts for making it happen.

In 1986 the field of nanotechnology was jolted into existence with K. Eric Drexler’s book Engines of Creation and his visions of what may or may not be possible once we have the ability to work with nano-scale materials. While some of his visions for molecular-scale factories and self-assembling machines remain the source of much discussion and debate, his visions served as a significant turning point for scientific research and commercial development.

The Familiarity Contraction Principle and Our Future

Here are the three core tenants of the Familiarity Contraction Principle:

Much like conductors directing an orchestra, people who work inside of a future attractor network will find themselves at the very point where the future is being created. They will become the “attractor reactor” where the future meets the present and life as we know it becomes a footnote in history.

← City of the Future – Part One The Future of Philanthropy →