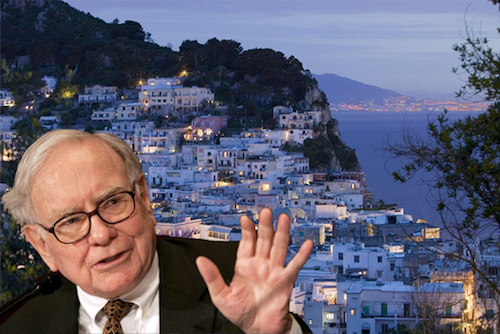 Warren Buffett owns many things, but so far owning his own country is not one of them.

In 2008 I gave a talk to an audience of 1,200 at the “Leaders in Dubai Business Forum” along with a dozen other global thought leaders that included best-selling writer Tom Peters, former New York City Mayor Rudy Giuliani, former World Bank President James Wolfensohn, and many more.

Most of the speakers were addressing our depressingly screwed-up economy. I decided to take a different approach and presented my thoughts on emerging new systems for governmental power.

One idea, in particular, raised more than a few eyebrows among the Dubai group: selling islands as autonomous countries.

Dubai had been on the cutting edge of island-building technology, building Palm Island, along with a series of other artificial costal islands, selling them as high-end luxury homes and resort properties.

I suggested that creating new land could lead to the creation of real estate that is unattached and unaffiliated with any existing nationstate or indigenous group — land that could be sold for much more money as an autonomous country. I still see this as a distinct possibility today.

However, looking at the desperate state of countries in Europe today, it may now be cheaper to buy an existing country than to start a new one.

So could Warren Buffett buy Italy, or Greece, or Portugal? The answer may surprise you.

Few status symbols can rival that of owning your own country. Countries like Italy and Greece with their long recorded histories of art and culture might be some of the world’s most prized possessions, if they were indeed available for purchase.

Purchasing an entire country has not been an option, at least not in recent history. But recent twists in the global economy have shown how some governments have radically mismanaged the nations they were entrusted to administer.

For this reason, many of these countries have turned to experts far more skilled in managing fiscal affairs than the populous candidates of the past. As a case in point, Italy’s flamboyant Prime Minister, Silvio Berlusconi, has recently been replaced with the more pragmatic economist, Mario Monti.

Desperate times cause people to make desperate decisions. Democratically elected officials that, until now, have only needed to look good in the eyes of their own constituency, are being scrutinized by global leaders and the international new media. The stakes have changed.

So wouldn’t it make sense for desperate countries to turn to some of the best minds in the field of money management to help them solve their problems?

Once a country is staring clearly into the abyss of national insolvency, a bankruptcy of epic proportions, desperation sets in. National leaders who normally look calm and collected in front of news cameras will begin grasping at straws in the background. When the money runs out, they will be willing to consider virtually every option, including a term sheet presented by the world’s most famous investor, Warren Buffett.

I should make it clear that I have no insider knowledge of Warren Buffett’s desire to buy or even invest in a country. But I can assure you that if he’s not interested, there are other fund managers like Buffett who would be. And while dangling a Berkshire Hathaway offer in front of a room full of international reporters may be viewed as a safer alternative to other desperate measures, it will be the behind-the-scenes deals that are being struck where the real stories lie.

Can Someone Really Own a Country?

There are several ways to look at this question.

Keep in mind the issue of what we think of as “owning a country” is really all about status and influence. I don’t think that any self-respecting investor would ever dream of “running” the country they “own.” Governing people is far too messy and best left to politicians. However, being a master puppeteer pulling strings in the background is a very appealing position to be in.

Are we setting the stage for a new age of economic Royalty to emerge?

As Winston Churchill once said, “The best argument against democracy is a five-minute conversation with the average voter.”

While most governmental leaders will sing the praises of democracy as the fairest form of government, few have dared to point out the negative aspects of the democratic process. Citizens of a country do not cast their vote based on what’s good for the country. Instead, they vote for people and issues that best serve their own interests.

In its present form, most democracies are far too slow. When a fiscal crisis arises, immediate steps need to be taken to prevent mass destruction in the global financial markets.

In the past we have had the luxury of being able to wait for decisions to be made. But every day the giant foot of global competitiveness presses a bit harder on the accelerator of change. Reaction times are critical. As a result, some of the least democratic countries are emerging as the new leaders.

In studying the science of group dynamics its important to note that the output of a voting group is governed by the median IQ of its members. Yes, I understand that IQ is a poor way to describe intelligence, but whatever label you use to describe a voting community – IQ, EQ, SAT Scores, Aptitude test results – this form of reasoning will still apply.

While important ideas floated by people in the higher IQ spectrum will often gain traction, all final decisions, if governed by a democratic process, will be decided by the median IQ of those involved.

In a democratic process, every voter gets one vote, regardless of their class, job position, race, shoe size, or level of intelligence. 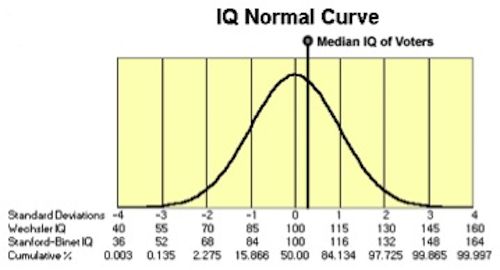 When studying the voting public, the people who actually cast their vote in major elections, we find the median IQ to be slightly above that of the general population’s average IQ – somewhere around 104-105.

Expanding on the notion that elections are decided by the center of the IQ bell curve for voters, its important to pay close attention to its likely ramifications:

In simplest terms, the purpose of a business is to make money. Without the lifeblood of money coursing through an organization’s veins, a business will cease to exist.

When comparing the entity of a business with that of a country we can begin to understand the differences. Businesses are not bound by geographical borders. Employees come and go. Businesses do not rely on a single customer base or put their stock in a single set of systems.

The purpose of a country is far different. While there are exceptions to every rule, countries, in general, have an obligation to preserve the health and well-being of their citizens. They create their own systems for banking, currency, trade, and the rule of law. Countries set the rules that “all who enter” have to play by.

An unhappy employee can be fired or move to a different job. An unhappy citizen, on the other hand, has a more limited set of options, and may be more inclined to start an uprising.

We have come a long ways since 1850 when Paul Reuters, founder of the Reuters News Service, set a new speed standard for delivering news between Brussels and Berlin by using carrier pigeons.

With the pervasiveness of smartphones and instant connectivity, we are living in a society that jacked-in 24-7 to the world around us.

We have entered into a new age of hyper-awareness where reaction times have dropped from minutes to seconds, and in the case of computers that make trades based on mathematical models, the time is now measured in milliseconds.

This new level of awareness is still evolving and remains a new-found ability that is, at best, poorly understood. At the same time, hyper-awareness is increasing the volatility of global markets, and by extension, increasing political unrest.

Is there a real possibility that Warren Buffett may try to buy his own country? No, it’s highly unlikely.

However, the global economic crisis is far from over. Demographic shifts are creating economic shifts. Aging populations have enormous clout and will have even more in the future. Declining populations are reducing demand for goods and services. Technology is replacing jobs at a rate faster than ever in the past. The rich are getting richer and the middle class is shrinking.

Our existing financial structures are a poor fit for fluid structures of global business today. The interdependence of people, businesses, and governments is evolving, and this is creating an endless stream of catastrophes. But in the midst of chaos, many will find opportunity.

So rather than Warren Buffett buying a country, the bigger question is, “will someone be able to buy their own country sometime in the future?” To that I have to answer, yes.

← 55 Future Jobs of the Future The Coming Collapse of Bitcoin? →