Empowering “Things” for Our Internet of Things 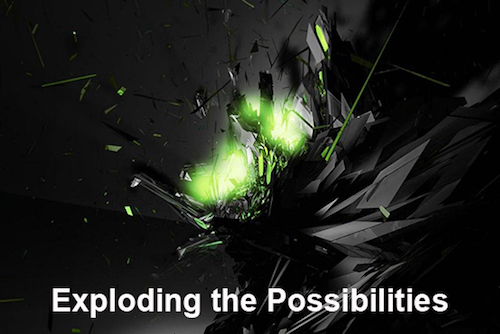 In much the same way that we now expect every child’s toy to talk, in the future, we will expect virtually everything we own to be connected to the Internet.

Our mushrooming “Internet of Things” is growing exponentially, and estimates of its progression vary tremendously. GSMA estimates connecting 24 billion devices by 2020, while Cisco and Ericsson think we will hit 50 billion.

Depending on a few key breakthroughs, these estimates may all be on low end, and here’s why.

Telecom carriers are primarily concerned about devices that connect directly to the Internet, but a rapidly growing category of peripheral devices are designed to connect indirectly through smartphones, home or office Wi-Fi, or other smart devices.

Here are some of the innovations that could make this whole industry go viral. 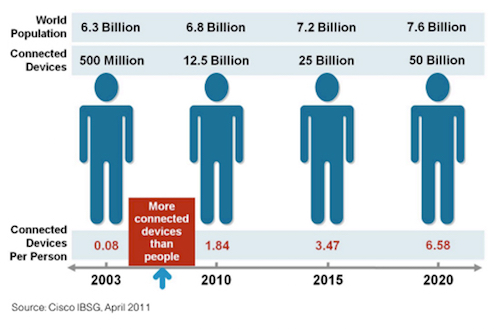 Internet of Things – A Brief History

In a recent report by Cisco, the writers determined the Internet of Things was officially born between 2008-2009. This was the point where the number of devices exceeded the number of people on earth.

The number of connected devices per person reached 1.84 in 2010.

Since approximately 2 billion people use the Internet today, the number of connected devices per person in 2010 jumps to 6.25 instead of 1.84. 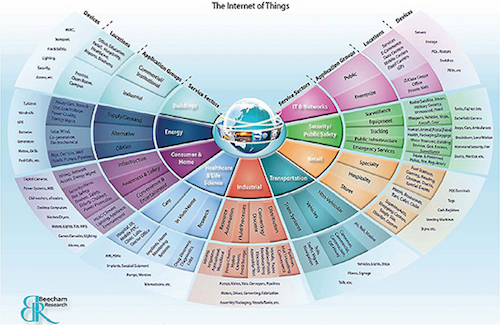 From Beecham Research, the diagram above represents the Internet of Things ecosystem in different industry sectors like energy, healthcare, science, transportation, retail and others.

A 2011 study by Machina Research projected a sevenfold increase in revenues by 2020, creating a $1.2 trillion market opportunity for the wireless industry.

So where exactly are these opportunities? The study projected the following breakdown:

“We are moving into a new era in connectivity where we will see the proliferation of billions of connected devices in the world. Most of that growth is coming from machine-to-machine: a new market for communications service providers, and with new dynamics,” says Jim Morrish, Director at Machina Research. “The way that mobile operators, device vendors, service providers and others in the value chain react to this opportunity will have important implications for their future success. Right now, the mobile industry has a clear opportunity to play a central role in the Connected Life.”

While most of the world is focused on adding intelligence to high dollar items such as cars, refrigerators, washer & driers, and lawnmowers the true connectedness revolution will happen with inexpensive low-end devices that only cost pennies to manufacture.

As pricing drops, manufacturers will routinely add everything from identification chips to freshness sensors as a part of nearly all of their packaging. Here are a few examples:

GPS Locator Devices: Creating simple GPS trackers that could be applied as a sticker would be an instant hit. These micro-tracking devices would make everything from purses, to cellphones, to car keys, to wallets instantly findable. Each person would have their own sphere of objects they could track and find instantly.

The Billion-Cam Video Network: If someone invented a simple, inexpensive solar or RF powered video camera that could easily be connected to a home or office Wi-Fi, there would be a mad rush to purchase them as an instant video security system. So what would it take to get people to connect 1 billion video cameras to the Internet? We may soon find out.

Personal Food Network: Most people have a hard time keeping track of all the food they have in their house at any given time. If the food industry started adding smart tags to all their packaging, simple apps could be created that monitor freshness, inventory, recommend possible meals, and creates grocery lists for the next time someone goes shopping.

Single Use Sensors: As soon as the iPhone was introduced with motion sensor technology, creative people around the world began asking the very simple question, “What other things can we do with motion sensors?” And the answers that app developers have come up with are more than a little ingenious.

So without waiting for smartphone companies to incorporate features into the smartphone itself, remote sensors with wireless signaling can open up opportunities in a spectacular fashion. To stir your thinking a bit, here are a few sensors that come to mind:

In the 1990s, Kris Pister, a researcher at UC Berkley dreamed up the idea of sprinkling the Earth with countless tiny sensors, no larger than grains of rice.

These “smart dust” particles, as he called them, could be used to monitor everything. Acting like electronic nerve endings for the planet and fitted with computer processors, sensing equipment, wireless radios, and extended life batteries, smart dust would have the capabilities of providing huge volumes of real-time data about people, cities and our natural environment.

Future designs for smart dust will have them detecting everything from moisture content, to soil temperature, to chemical composition.

Farmer’s fields will be glowing with information. Whereas most have had the option in the past of selling “rights” associated with the land – water rights, mineral rights, and now wind rights – future farmers will also have the option of selling information rights.

Information gleaned from smart dust will be far more granular and instantaneous than any current information gathering technologies.

Data streams coming from these plants give them a “voice” that will help us better understand the idiosyncrasies of the world around us.

The topics I‘ve mentioned are only scratching the surface.

The number of linked sensors, cameras, and complex peripheral devices are already exploding around us, and ingenious people will figure out new and unusual ways to blend these streams of information into a cohesive intelligence layer that we can interact with in our daily lives.

As you might imagine, attempts to improve the sphere of knowability for purposes of convenience and safety will be confronted with serious resistance from those wishing to maintain a distinct layer of privacy for our protection. These will be tough decisions to wrestle through and the resulting public policy decisions will have far-reaching implications.

In the mean time, vast fortunes will be won and lost, as the Internet of Things becomes part and parcel to our daily lives.