The next big innovation in healthcare may very well be a printer. But this is no ordinary printer.

Professor Lee Cronin heads up a world-class team of 45 researchers at Glasgow University in Scotland. His team has figured out how to turn a 3D printer into a sort of universal chemistry set capable of “printing” prescription drugs via downloadable chemistry.

According to Cronin, since nearly all drugs are made from carbon, hydrogen and oxygen, along with readily available agents such as vegetable oils and paraffin, a printer can be developed with a relatively small number of “inks” to make virtually any organic molecule.

However, as you might imagine, not everyone is welcoming this type of innovation with open arms. Here are some of the likely implications this radical new technology may have on the health of humanity.

Controllers of the Supply Lines

Solving world problems is never simple. Researchers currently estimate 13% of the world’s population goes to bed hungry every night. Yes, we have gone from 26% of the world population being undernourished in the 1960 to 13% today, but it remains an excruciatingly high number.

The problem doesn’t stem from a lack of food. World agriculture produces 17% more calories per person today than it did 30 years ago, despite a 70% population increase.

The principal problem stems from governments that repress economic activities and archaic distribution systems bottlenecked by local powerbrokers that would rather see people die than lose an opportunity to make money.

At the same time that people are dying of starvation, roughly 50% of all the food in the world goes to waste. Small percentages of food are lost in the farmer’s fields, on trucks and through delivery systems, in food processing plants, on store shelves, and in our own homes. Altogether, these tiny slivers of inefficiencies add up to a huge number.

For many people, pharmaceuticals are as important as food, and the supply lines are equally complex. Anything that can be done to circumvent our current power brokers and barriers to entry should be welcomed with open arms. But life is never that simple. 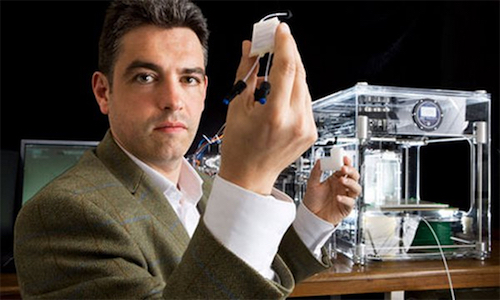 Can We “App” Chemistry?

Professor Cronin’s latest TED talk dealt with the simple question: “Can we make a really cool universal chemistry set?” and “Can we ‘app’ chemistry?”

He thinks in terms of “what Apple did for music,” he’d like to do for the discovery and distribution of prescription drugs.

As a first step, Cronin’s team is looking at ways in which a relatively simple drug – ibuprofen – can be produced with his 3D printer or “chemputer”. If they can accomplish that, the possibilities suddenly seem endless.

“Imagine your printer like a refrigerator that is full of all the ingredients you might require to make any recipe in a giant new cook book,” Cronin says. “If you apply that idea to making drugs, you have all your ingredients and you follow a recipe that a drug company gives you. The value is in the recipe, not in the manufacturing of it. It is essentially an app.”

In the same way music downloads have disrupted the music industry, downloadable pharmaceutical recipes piped directly into pill replicators will have huge implications for an industry that spends billions every year on research and development.

On one hand, drug companies are constantly looking for new ways to shut down the underground counterfeit drug trade that is pervasive in many third world countries. Phony knockoffs are neither produced to exacting specification, nor are they even made with the same chemicals.

Having cheap delivery mechanisms that could print pills to an exact specification would enable legitimate pharmaceutical companies to regain at least some control over this subversive market.

But much the way Napster cut the legs out from under major record labels, floating digital drug formulas may cause them to lose more control than they gain. Very likely, big pharma will do everything it can to block the proliferation of pill printers, until they can find ways to make the pipeline safe and secure.

With a tool like this, the scriptwriters for “Breaking Bad” will have to rethink their plot lines, and Mafia kingpins will be paying very close attention as details emerge.

Even though it’s being developed with the best of intentions, the “Chemputer” will have the ability to produce illegal narcotics with no discernable chemical trail.

Marijuana and cocaine drug trades both have elaborate growing networks tied to equally sophisticated supply lines and production facilities. The world of “meth” was created to circumvent the problems associated with the labor-intensive drug operations of the past.

In addition to eliminating most of the supply chain, the “Chemputer” will have the ability to alter recreational drug formulations on an ongoing basis to keep the products legal as lawmakers play their whack-a-mole game of banning the newly created substances on a monthly basis.

Working with a “Chemputer” will give us the ability to create industries that work with far more precision than anything available today. Think of the idea of “per­fect water.“

We all know pol­luted water is bad for us. If we take every­thing out of it and create distilled water, it’s less than opti­mal. Some­where in this whole spectrum of water is what I think of as “perfect water.” But it’s only perfect for one person at that exact moment in time.

Somewhere in this line of thinking is the ultimate interface. So far we haven’t had the ability to work with that level of precision.

As example, doctors today prescribe medications for a patient in doses of either 200 or 400 milligrams, when the ideal dosage might be 147 milligrams or 369 milligrams.

By using the “Chemputer,” we may eventually be able to create consumer products with this level of granularity.

In addition to increased precision, we will also develop new ways to deliver medicines.

Nutraceuticals, also known as bioceuticals, encompass a large spectrum of food and food-based products that are tied to the practice of holistic and alternative medicine. Using food printers instead of pill printers, medicines could be delivered in cupcakes instead of tablets.

Lee Cronin’s ideas are sure to be a disruptive force in future healthcare. His concepts will also quickly permeate the entire chemistry profession, and my discussions about developing a pharmaceutical-grade pill printer are just scratching the surface of its true potential.

Yes, it will very likely follow down the path of Gartner’s famed hype cycle, and we won’t know its true potential for several years. But it is giving us a new perspective on a very old profession.

An open source drug movement may very well be as dramatic a shift to societal norms as the Internet itself.

Professor Cronin is a naturally impatient person and wants to quickly expand the possibilities. “As well as transforming the industry and making money,” he says, “we could be saving lives. So why should we wait?”

← Empowering “Things” for Our Internet of Things Inventing the Future →