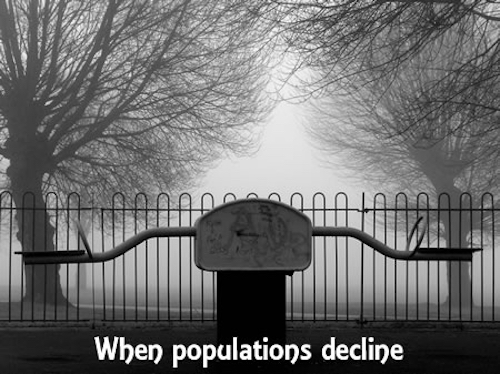 Many countries are asking, “Where have all the children gone?”

In the next sixty seconds 245 babies will be born worldwide. India and China alone will add 36 and 29 respectively. When numbers such as these are reported by the news media they paint a very gloomy picture of the world to come. This portrayal is seriously misleading.

The population bomb is a misfire.

Notions that a massive wave of humanity will swamp the globe are simply wrong. At a recent speaking engagement, I talked about declining global population growth rates and announced the world may be on the threshold of catastrophic population decline. Of course, I was challenged. But, I’m sticking with my prediction. Fears of over population are now being replaced with fears of under population.

From a global perspective, we haven’t reach negative population growth just yet, but the numbers are painting an ominous picture.

A study conducted by the UN in 2002 predicted that 75 percent of the developed world will hit a below-replacement fertility rate by 2050. This means that Eastern Europe will lose a third to a half of its population by 2050, a number that has been steady declining since the collapse of the Soviet Union.

Some variation can be dismissed as statistical anomaly. However, a U.S. Census report shows for the period of 1957 and 1960, the population growth rate dropped from 1.94 to 1.34. This too was a short term irregularity but demonstrates the potential for rapid shifts.

The U.S. Census report goes on to predict a gradual decline in population growth from 1.13 today to 0.60 by 2039.  Past variations make this steady decline prediction suspect and variations may be much more drastic. This could mean fewer and fewer replacements for us – much sooner than we thought.

Modern pressures on infrastructure reinforce a belief that population growth is a problem. Blame for crowded restaurants, brown-outs, urban sprawl and other irritants of modern life that leads to the familiar refrain: Too many people, too few resources.

It has been tempting to think, too, if we could deal with runaway population growth, many of our woes would disappear. Unfortunately, the media was sold on the idea that we can solve most of our problems by having fewer people. This notion paints a completely inaccurate picture of the situation.

Fact: U.S. Census Bureau numbers show the world population growth rate peaked over 40 years ago in 1963 and has been trending downward ever since. Demographers now predict that absolute human population will peak at 9 billion by 2070 and then diminish. This prediction of racing to 9 billion, once forecast to occur 1950, just keeps getting throttled back – and the date may be so far into the future as to lack relevance.

Long before 2070, many nations will shrink in absolute size. At the same time, the average age of the world’s citizens will shoot up dramatically. For example Mexico is aging 5 times faster than the United States. By aggressively addressing the dangers of overpopulation, the world may have jumped on the brakes too hard. A new problem has appeared, an aging and declining population.

Before giving in to the temptation of thinking fewer is better, consider again. Growth is an economy driver. A world with fewer people has fewer people buying cribs, college educations, new cars and new homes. A planet with a shrinking population will suffer from entirely new kinds of problems, such as ghost town syndrome, leading to tired and often sickly economies.

Historical events distort global population growth. A study by RAND published in 2000 describes how the separate factors that create growth (primarily births and deaths) interact. It also explains patterns of growth in terms of an ordered sequence of changes in death and birth rates. 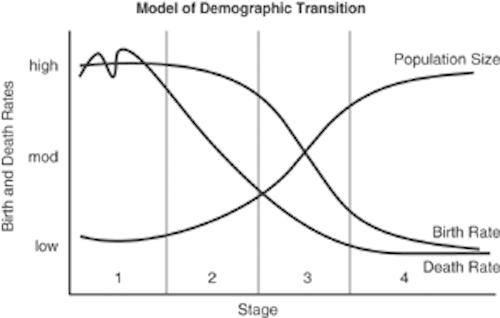 The report goes on: “Underlying the parity between births and deaths in Stage 4 are a number of behavioral changes. Particularly important is the shift away from the fatalistic view that life is beyond our control. That view has been replaced by free choice. This shift allows individuals to consider how many children to have, what kind of lifestyle to lead, and where to live. Rather than seeking to have many children, parents place more emphasis on having a few well-educated individuals, and family sizes decline. Childbearing often is seen as an obstacle to self-fulfillment, and significant numbers of couples refrain from having children.”

Within 10 years, adults will outnumber children for the first time. The report, An Aging World: 2008, forecasts that over the next 30 years the number of over-65 adults is expected to almost double, from 506 million in 2008 to 1.3 billion – a leap from 7 percent of the world’s population to 14 percent. Already, the number of people in the world 65 and older is increasing monthly at an average of 870,000.

In Japan, work force decline is averaging about 1 percent per year for the foreseeable future. The measure of a nation’s economic output, its Gross Domestic Product (GDP), is the number of workers times the average income per worker. With a labor force shrinkage of about 1 percent a year, Japan could be hampered by long recessions well into the future.

No other developed country will see as large a percentage increase in the elder population as the United States because it has the most baby boomers.

“…Of particular importance is the fact that the fertility decline seen in Mexico is one of the fastest in the world. In fact, the plummeting of the country’s fertility rate from 6.5 in 1970 to 2.2 at present is much more drastic than the world’s average decline from 4.5 to 2.5 during the same time frame. Over the next decades, Mexico will face sub-replacement fertility rates-patterns of childbearing that, holding all other factors constant, will result in an indefinite population decline-which will lead to a gradual aging of the population.”

Indeed, estimates from the United Nations Population Division (UNPD) suggest that Mexico could face population declines by as early as 2030.

Formerly isolationist China and its one child-per-family restrictions have come under increasing world scrutiny.

When faced with massive population growth issues, China’s government preempted the Stage 4 equilibrium in 1979 with mandated birth control: one-child per family. Authorities in China claim that the policy prevented more than 250 million births in the first 20 years of the policy’s existence.

Combined with a cultural preference for male babies, the policy has skewed population gender makeup, which now is 122 male births for every 100 female births. In some rural areas the imbalance has been reported as high as 28 men for every woman. Long-term effects of the policy have generated much discussion. Some expect the one-child policy to adversely affect Chinese families. After a few generations, each child grows up as an only child, with no siblings, and no cousins. The child’s entire family tree will consist of two parents, four grandparents, and eight great grandparents.

Followed to its logical extreme, the one-child policy will mean death rates will outstrip birth rates by over two to one until the nation’s total population dwindles to a fraction of itself. Under pressure of economic collapse, China might be expected to lift its one-child rule. But the change in culture may prove irreversible by then.

More collapse appears to be in the cards. Pay-as-you-go social programs, such as Social Security and Medicare, will endanger the U.S. economy as the burden is passed on to a shrinking population.

Social programs may disappear, following the example unfolding in bellwether California. Between the rock of a shrinking working population and the hard place of expanding benefits, most countries face a ticking social time-bomb. None of the scenarios for avoiding massive problems looks promising.

The growing imbalance between the producers and non-producers will only put larger pressures on benefit programs.

The RAND report might have left readers to conclude once Stage 4 equilibrium was reached that equilibrium would continue. The changing world defies linear analysis. Change will quicken, and unexpected wild cards will be shuffled into the deck.

As the world adopts a less-is-more mindset when it comes to parenting the next generation, we will find growth rates approaching zero and a global population that is less resilient when it comes to recovering from wildcard influences.

Similar to the unpredictable rare occurrences that author Nicholas Taleb describes as Black Swans in his book by the same name, wild cards become an insistent variable with which we must contend.

An unlimited number of downside scenarios exist. Here are five:

The Mask of Immigration

The U.S. has the enviable position of being able to turn the immigration faucet on or off at any time. For a variety of reasons, the U.S. remains the most attractive nation in terms of lifestyle, universities, culture, and opportunities for wealth. A drop in population is fixable.

Not all nations enjoy such luxury, and the legendary status of the U.S. is well-known among the less fortunate. An unavoidable consequence of massive global communication and wide-casting university admissions is envy and perhaps dread for the uninvited. A recent Gallop Poll of the 15-to-30 year old demographic reveals what may be a distressing feature of the Middle East population. A stunning 59 percent of young men and 84 percent of young women would prefer to live elsewhere.

If the U.S. retains its attractiveness, continued growth can be assured. Unless other nations catch up, regions such as Western Europe, where immigration is limited, will continue losing population and economic stature. Japan, which faces the prospect of losing a quarter of its population over the next 25 years, makes little allowance for immigrants.

The over-population crisis was oversold. An under-populated future looms ominously ahead for the Western World.

A long-term view might wither in the face of a strong anti-illegal immigration movement that has gained traction here in the U.S. But, economic realities eventually will assert themselves.

As under-developed nations move into Stage 4 equilibrium, the world may see runaway contraction. The exact timing is uncertain. Proliferation of communication technology on the African continent will bring about improved health, education, earnings and another surprising trend. Competition for human resources will heat up and out migration could become problematic.

As health systems improve, we will see greatly expanding age demographics, with rapidly growing numbers of the 70-plus age range. Many will continue to work, but most will opt for less onerous jobs, leaving the physically demanding and highly stressful positions to the young.

Coupled with the other challenges associated with an aging, shrinking society, the elderly are less inclined to innovate, learn technical skills, or take risks as their younger counterparts. If these tendencies hold, a grayed society will be less equipped to meet the challenges ahead in the coming age of empty playgrounds.