The Future of Influence 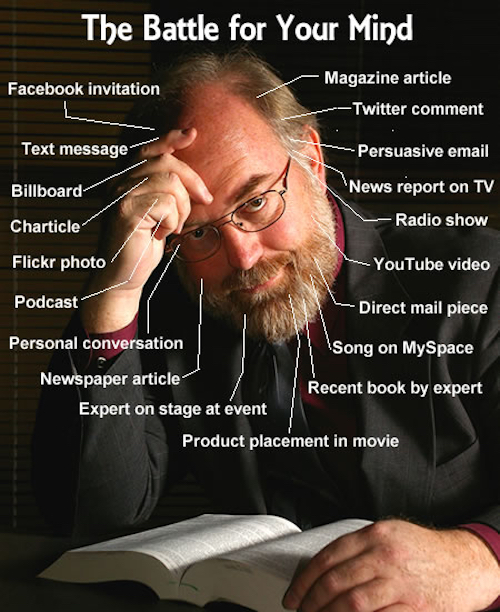 Clergymen, columnists and teachers have it. Even butchers at grocery stores have it. What they do is hold your attention better than most and engender trust. That’s influence.

We are social creatures who shape our lives, lifestyles, consumer habits and beliefs according to the influences and influencers in our lives. We can usually name the most influential people we know. We quickly can point to songs and films that made us think, laugh, cry or change. By the same token, we all have a private fan club, groups of people who care about and listen to us.

Your persona has fans, a group that expands and contracts as your personal charisma and the power of what you have to say waxes and wanes. In media, influence is measured by how many people listen, and or act.

The job offers you receive, the business opportunities that come your way, and the people you meet are all influenced by the relationships you have built. Your ability to manage and influence your fan club will determine, to a large extent, where you end up on your life’s journey.

Fan clubs are as old as culture itself, dating back to days long before fanatical teenagers fell in love with rock stars. And, worship didn’t always involve people. Some clubs develop around ideas, themes, trades, or even industries. Space elevator enthusiasts come to mind.

Influence is as old as tribes. Influence powerfully transcends what other considerations may preoccupy us at a given time. An influencer is a person who not only wants you to care about them or an institution, but they want to sway your thinking, to call you to action, and recruit others to a cause.

Influence is commodity-like, too. It can be borrowed as an author might do when citing an authority. You can enlist fans by making reference to experiences surrounding an image, personality, brand, and charisma of the influencer. Elite athletes like Olympic medalists and NFL quarterbacks are paid a king’s ransoms for endorsements. Complete strangers can gain our trust, and influence us.

Who are your primary influencers? Who is it that you pay most attention to when they recommend something?

Major media still invests heavily in salaries for news people who have built reputations over time and earned trust in smaller markets. Bylined staff writers and others who populate traditional media were the few, the elite. You could count the number of major news outlets on one hand. There were television stations, radio stations and the various publications that populated newsstands. Today, the number of offerings have exploded with online media, podcasts, satellite radio, downloadable books, and somewhat devious influencers such as TV shows with sneaky attempts at product placement.

In the 2000 edition of Positioning by Al Ries and Jack Trout, the authors cite the statistic that America consumes 57 percent of all of the advertising in the world. This shouldn’t surprise us. The wealthiest nation is also home to the largest concentration of media in the world. There is no escaping advertisement. We are under a constant barrage of competing marketing messages. Even ads positioned on bathroom walls offer no refuge from the onslaught of pitches.

Media of the last century used a shotgun approach to marketing, spraying a large demographic area with pellet messages intended for all, but would strike a tiny percentage. This expensive and wasteful type of marketing will begin to vanish. Trying to shape a message that resonates with as many people as possible is an underappreciated art, that is until you win a cool million for your Doritos commercial, like the ones that aired during the 2009 Super Bowl. Madison Avenue is still smarting from that assault on their pride. They should get used to getting bested by the little guys.

Over time, the geek-laden Numerati  – so aptly labeled in Steve Baker’s recent book – will devise systems for targeting ideal customers. Armed with the exacting precision of nextgen digital targets they will increase the percentage who respond to a message from the 1 percent range of today’s direct marketing pieces to conceivably as high as 50 percent. The response rate will rise. Perhaps most reassuring, the other 50 percent won’t feel they are being nagged by a constant barrage of misdirected ads.

Today’s technology tools allow marketers to extend their reach far beyond anything we could have dreamed of 20 years ago, and the barrier to entry today is nearly non-existent. The gatekeepers can join buggy whip makers in history’s unemployment line. “Getting the word out” will be done by anyone interested in sharing information. Things as simple as a blog entry, Facebook or Twitter post, Flickr photo, or YouTube video are grabbing audience attention as never before, in numbers that have marketers running to social media boot camps.

Social media experimentation is producing some interesting projects, turning social networking into a popularity contest. Many become confused by the sheer power of social media, finding themselves suddenly out of their element when it comes to leveraging popularity and influence. Even as they reach the lofty levels of 20,000 or even 50,000 followers on Twitter, the proud owners of these accounts find that they are unable to cash in. Their massive numbers don’t translate to influence. Product recommendations and personal endorsements made by someone with no credentials other than a large follower-base tends to fall on deaf ears. Perhaps there are few genuine followers among so many leaders. Meanwhile, someone with 1,000-2,000 followers can have a disproportionate influence in social media, building an audience of readers who hang on their every word.

We are in the early stages of social media experimentation. No one is taking bets on the value of a Twitter account with 50,000 followers – yet. And certainly not on the value of that account five years from now.

In the future, so-called super-influencers will begin to undergo massive scrutiny to accurately parse the profile and makeup of each swayable impression, assigning value to each potential conversion. In short, every influencer will need to know their own metrics.

As we think through the trend lines that will govern tomorrow’s influence brokers, we begin to see a radically different world emerging.

Even though we have seen many new options come into play, some of the old structures for peddling influence are still alive and well. As an example, an expert speaking on stage to a captive audience is still incredibly powerful. Being a persuasive writer, radio talk show host, or industry expert still has great value and will continue to be valuable in the foreseeable future.

In the past, the owner of a small town newspaper had a very well-defined community where the town limits defined the market of the time. Today we are seeing physical boundaries disappear. Though, new boundaries are forming around the various media we are employing.

Additionally, crossing political boundaries, language barriers, and time zone differentials are all past problem areas that are dissolving around us. Rising instead are communities of interest where people are forming bonds around technologies, sports, competitions, and literally millions of other micro-points of fascination.

Here are a few other thoughts on the trends we will see:

Attention Spans Getting Shorter: The most watched videos on YouTube are 30 seconds and shorter. Even though it doesn’t seem like our attention spans can get any shorter, they will. People who can put together charticles (charts that tell an entire story), short animations, graphics, and videos that can convey a message in the shortest amount of time will be in high demand in the coming years.

Increased Frequency: It’s best not to think about influence from a “lights-on” vs, “lights off” perspective. Rather, influence tends to act more like pulsing power with every surge tied to your latest contribution followed by a period of waning interest. A person or company’s position as an influencer will be determined not only by the potency of its effort but increasingly by its frequency of contribution.

Courseware Tools: The business world has long accepted that any person can create a class and market it to businesses. Our ability to create classes for the rest of the education market is coming. Several companies are working to create “rapid courseware building tools” and we will see several new markets for extending influence springing to life as a result of this in the coming years.

Tool Smorgasbord: While many good tools exist, most are designed with geeky overkill. Why make a Swiss Army Knife when a good old fashion blade will do? Look for a new breed of companies to emerge with far more intuitive user interfaces. Many will offer cross-medium mashup capabilities such as animations overlaid on video or background noises flowing from a still image.

Less Text-Based Society: In coming years the written word will begin to lose appeal as other forms of media such as video, podcasts, animations, and others become easier to work with. The first major turning point will come when keyboards start to disappear. This will be a clear sign of the diminishing power of the written word.

More Pervasive Internet: Traveling across the U.S. and trying to stay connected to the Internet is painful at best. Current efforts under way should fix connectivity issues in even the most remote locations, and connections speeds should amp up to truly mesmerizing levels over the coming decade.

Holography: At one time, it was believed we would instantly spring from our present two dimensional world into a lifelike 3D media where it was impossible to tell the real life from its projection counterpart. But holography has been far more difficult to implement than its proponents imagined and we now know that it will be introduced in baby-stepped nuances, with each iteration a bit more lifelike than the past.

That said, the 3D world is still coming and we will begin to see improved elements of three dimensionality showing up in everything from games, to graphics, and videos. The allure of realism will attract followers slowly at first, but gain speed quickly over the next decade.

Having a job as a professional influencer will be a very appealing position in the future. The appeal comes from being a well-respected expert, invited to lavish events, held in high esteem by peers.

However, the industry that will form around the concept of influence is a fluid ocean of moving parts, with each current of opportunity morphing and overlapping onto other currents on a daily basis. This is a sport where only the most agile can play, and maintaining your position as a super influencer will be a constant struggle. The smaller the niche, the greater your chances are of survival.