Every Disaster Has a Beginning: In Search of Anomaly Zero 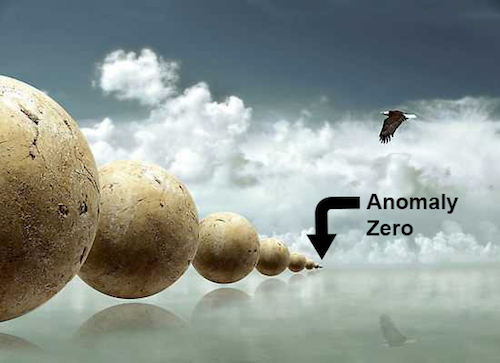 In 2012, when 15-year old Jack Andraka’s uncle died of pancreatic cancer, he decided to look into it. He found that the current test for pancreatic cancer was over 60 years old, cost over $800, and wasn’t very reliable.

For this reason over 85% of pancreatic cancer cases were detected too late, when the chances of survival were only 2%.

As a bright and inspired young mind, Jack was able to devise a far better testing procedure, which he took to the researchers at Johns Hopkins University.

The result is a new dipstick-type diagnostic test that uses a paper sensor, similar to that of the diabetic test strip. This strip tests for cancer biomarkers in blood or urine, is over 90% accurate and only costs 3 cents per test.

Jack’s ingenious test strip will soon be used for early testing of other diseases as well. But this line of thinking doesn’t just apply to the medical arena.

As tiny humans battling the giant forces of nature, we need to do battle when the problems are still small. Jack was able to push the discovery of pancreatic cancer far closer to Anomaly Zero. Anomaly Zero is the first detectable sign that something is wrong.

Every major disaster in the world begins with the shifting of a single molecule, a spark of electrical energy, or some synapse firing in a different way.

We may not be able to spot that first sign of change, but can get far closer than what we detect today. So what exactly is Anomaly Zero and how close can we actually get to it and intervene before major damage begins?

In 1969, chaos theorist Edward Lorenz used the theoretical example of a butterfly’s wings flapping, where that simple movement became the root cause of a hurricane forming several weeks later on the other side of the planet. This has become known as the butterfly effect.

This type of cause and effect relationship, in chaos theory, is used to describe a nonlinear system where the true sequence of events is so complex that it can only be sorted out after the fact.

Anomaly Zero is different than that. Using an interventionist’s mindset, Anomaly Zero is the theoretical earliest possible point where danger can be confirmed as a real threat. In virtually all cases, it remains theoretical because we are a long ways from both understanding it and figuring out ways to track it.

The primary point of this discussion is simply to move the earliest red flags of detection far closer to the point of origin so most disasters can be averted.

When a forest fire starts, it’s relatively easy to put out the flames when it only covers a few square feet. Once it grows to an entire acre, it becomes far more difficult to contain.

At the same time, not all fires build momentum and turn into disasters. Fires in campgrounds, being carefully monitored by campers, rarely get out of control. So just scouting for fires in a forest will produce lots of meaningless data points, otherwise known as statistical noise.

With enough data points, certain disorders will cause an emerging situation to be flagged, first as noteworthy, something that needs to be monitored, and something that may eventually be upgraded to a dangerous condition.

If we think about change as measured along a 1,000-mile long yardstick, Anomaly Zero is at the beginning, and today’s early warning systems are at the end. Our goal should be to determine the earliest possible point that we can detect a problem?

How can we detect danger earlier, much earlier, while the situation is still controllable?

Everything I’ve discussed so far is about building awareness, and using this added awareness to halt something negative from happening. In this context it becomes easier to visualize a far better early warning system for detecting:

When it comes to spotting deviant behavior, we have the potential for intervening and removing the worst of the worst very quickly. Here’s an example.

One of the most notorious serial killers of all times was Pedro Alonso Lopez, known as the “Monster of the Andes,” who butchered enough people to fill a small town. After killing around 100 tribal women in Peru in the 1970s, he was apprehended by tribal forces that were just about ready to execute him when they were convinced by an American missionary to take him to the police instead.

Unfortunately, the police then just let him go, after which Lopez travelled to Ecuador, where he proceeded to kill about 3-4 girls a week, claiming that girls in Ecuador were “more gentle, trusting, and innocent”. This carried on until he was caught in 1980, but police were still unsure as to his guilt. But as luck would have it, a flash flood uncovered a mass grave that had hidden many of his victims, which then led to his arrest.

Once again, for some unexplainable reason, the Ecuadorian government decided to release him in 1998, deporting him to Columbia. Lopez allegedly said that he was being released for “good behavior”. His whereabouts today is unknown.

As we increase our awareness of what’s happening in society, the odds of this kind of deviant behavior being overlooked are dramatically reduced. In most cases, mass murderers like Lopez or Ted Bundy will be red flagged and caught after the first death rather than dozens or hundreds of deaths later.

But what if these types of disasters could be spotted before anyone died? Is there a data-driven version of Minority Report justice that might actually make sense without relying on mystical “precogs” to guide our way? 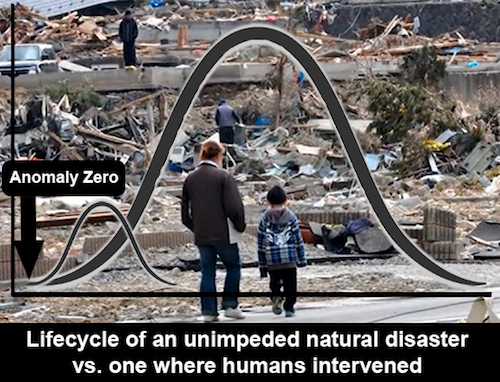 Like a single pixel on a trillion pixel image, we quickly lose our ability to find significance in a single point. But it is exactly that, a tiny little signal on the masterpiece of life that determines what happens next.

Every disaster has a lifecycle with a definable beginning, middle, and end. As with every statistical bell curve, the size and shape of the curve represents the overall impact on society.

But disasters are not inevitable. Human intervention can make a huge difference, and the sooner the better.

We are currently building a massive digital infrastructure with the ability to monitor and assess changes happening anywhere in the world in real time. As we move into the big data era, our awareness of pre-disaster conditions will grow exponentially.

Once we can sense an impending disaster, we will need to create response mechanisms capable of mitigating whatever forces are in play.

I’m certainly not deluded into thinking we can eliminate all or even most of the catastrophes we’ll be facing over the coming years. But we have an obligation to deal with these problems in a far better fashion than we currently are.

And all of this can happen if we focus our attention on the nano-size events happening at Anomaly Zero.

Please take a few moments to weigh in on this topic. I’d love to hear what you think.

← Introducing the Fully-Automated 24-Hour City Preparing Our Minds for Thoughts Unthinkable: The Future of Colleges and Universities →