Four Unexpected Macro Trends for 2013 and Beyond 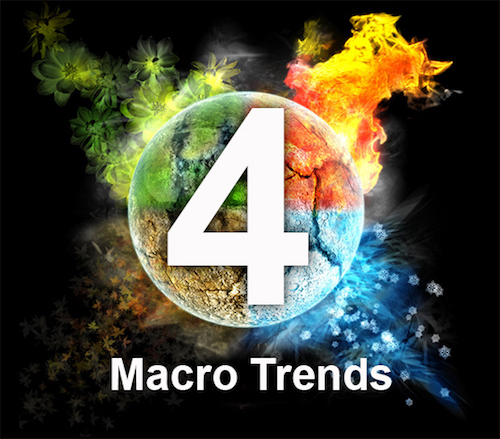 There is great value in theunknown.

My good friend Jeff Samson put it this way. “If I am ignorant of something and it is suddenly presented to me, I may find it innovative. The other option is that I will be annoyed by it, but eventually when enough others have accepted it, I will buy in and consider it innovative. So ignorance is as important to innovation as knowledge!”

Ignorance is also a valuable part of the future. Once a future is known, we quickly lose interest. For this reason, our greatest motivations in life come from NOT knowing the future.

So why, as a futurist, do I spend so much time thinking about the future?

Very simply, since no one has a totally clear vision of what lies ahead, we are all left with degrees of accuracy. Anyone with a higher degree of accuracy, even by only a few percentage points, can offer a significant competitive advantage.

Using this as a backdrop, here are four unexpected macro trends that I see dramatically influencing our future.

1.) The Shift to Natural Gas Vehicles

Every year we hear the predictions about changes in the energy landscape, but we are finally seeing hard evidence that the shift has already begun, but in far different ways than most have predicted.

Here are a few recent headlines:

The last headline talks about a topic I’ve been following closely for the past year.

With the recent boom in natural gas production, Shell is taking the lead on creating an infrastructure to offer a natural gas option at its fueling stations.

LNG is being rolled out at truck stops for long-haul, heavy-duty trucks with the advantage of longer driving ranges while not impacting tractor weight and other incremental costs.

CNG is primarily used in cars, buses and smaller trucks.

Here are some of the key trends driving this change: 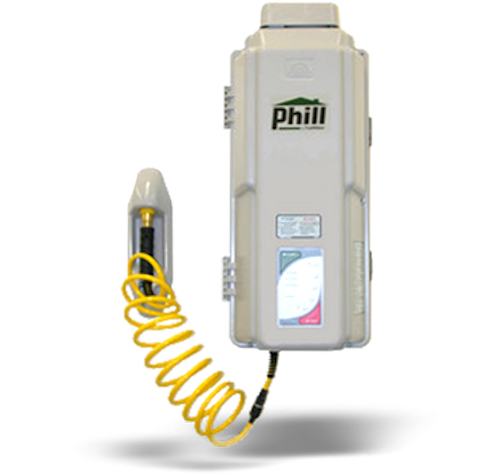 A Note About Phill – In 2004, Toronto-based Fuelmaker worked with Honda to develop a CNG refueling station for the home. The product they developed was called “Phill,” a small compressor appliance mounted on a garage wall that would enable someone to refuel overnight. It was priced around $4,500.

However, Honda pulled the plug on this venture in 2009 and the company was sold to Fuel Systems Solutions. New efforts in this space by Eaton and GE will force a dramatically lower price point.

Hurricane Sandy showed us how unreliable our current systems can become in the event of a natural disaster. We now know that we have too many choke points and natural gas cars and generators that can be refueled at home will dramatically change that equation.

The transition, however, will be slow because we’re dealing with the physical world. Building momentum will take time, but this train is already rolling.

2.) The Great Insourcing Movement – The Pendulum Swings Back Again

In the 1970s and 1980s strikes by union members were a commonplace occurrence. Fights between management and workers were very contentious, causing business owners to plot out ways to circumvent union influence.

As companies grew more multinational in scope, it became an easy decision to move factories overseas. Dramatically lower salaries, increasingly competent workforces, and the elimination of in-house labor issues made it relatively painless to send jobs to other countries.

But those days are quickly coming to an end. A recent article by Charles Fishman in The Atlantic titled “The Insourcing Boom” identifies some of the key changes that are driving many companies to rethink their outsourcing strategies.

Here are some of reasons why “insourcing” will become the next macro trend in business:

Look for “insourcing to be a long term trend. It certainly won’t work in all industries, and it may not even work in most. But the playing field has shifted, and those who aren’t paying close attention may soon end up as little more than a footnote in the annals of business history.

Contrary to what most academics think, literacy is not just about reading and writing. It can be, but that becomes a very narrow-minded way of looking at the world.

People in the U.S. are consuming information 11.8 hours every day, and they are doing it in many different ways:

In addition to the ones listed above are streaming music, podcasts, audio books, movies, courseware, and many more.

Only a small percentage of the information we consume is the written word, and this percentage will continue to decline as we develop newer, faster, and better ways to package information.

Yes, we still need to know how to read and write, but trying to exist in a world without being able to create videos, edit photos, download music, operate devices, or write code will be increasingly difficult.

Competing for jobs in the future will require people to be broadly literate, with the advantage going to those who are the most multidimensional.

4.) The Legalized Marijuana Movement – Nudging the Snowflake that Started the Avalanche

People have been predicting the legalization of marijuana for decades. To say that legalization was highly anticipated is something of a gross understatement.

The problem is that everyone was predicting California would be first. In fact, most of the secret laboratories at the tobacco and pharmaceutical companies for testing and refining pot are based in California. But it was Colorado and Washington that decided to go first.

Unbeknownst to most, these companies have already begun leasing space in Colorado and Washington to better position themselves for the first wave of business opportunities.

While both states are wrestling with an entirely new type of “controlled substance” legislation, lobbyists on both state and federal levels are being put into place to help “guide” people’s thinking.

What most people are missing is that marijuana is already one of the most researched substances in all history. There is already a proven market with proven demand.

Yes, other countries have had legal marijuana for years. But when the U.S. changes its mind, it generally creates an entire new global standard.

The legalization of marijuana will cause the U.S. to rethink its entire “war on drugs” policy, a war that has resulted in far more casualties than most wars. This will result in an abrupt shift in enforcement, legal and justice policies, incarceration rates, and related kinds of legislation.

Remember, any human act is only illegal if humans say its illegal. As history has shown, we often change our minds, and this is one of those times.

As Napa Valley is to the wine industry, Colorado and Washington will be to the emerging marijuana industry. While many will take a wait-and-see approach to how the industry develops, major fortunes will be won and lost starting with the early players in 2013.

Speaking about four macro trends is but a drop in our current ocean of change.

However, discussions around these topics have been rather limited and opening them up for a broader discussion seems very appropriate.

At the same time I’d love to hear your thoughts about these and other macro trends that we’ll be confronting in the future. We won’t be able to cover everything, but take a few moments to let me know what you’re thinking.

Very often the first discussion on a topic is the most important.