Entering the Era of Global Mandates 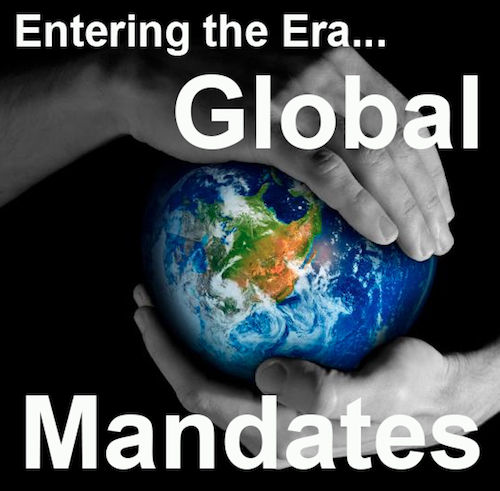 The year is 2018 and the Norwegian Nobel Committee, the organization charged with selecting the winner of the famous Nobel Peace Prize, has changed their process. They’ve decided to host a global election to allow the people of the world to decide which of the candidates is the most deserving.

Two months before the election, a slate of four possible candidates is announced. The election itself takes place over a 24-hour period and a secure online voting system allows voters to make their selection from any computer, tablet, or cellphone.

As a way to push voters to learn more about each contender, they are given a short test consisting of eight simple questions, two about each candidate, before the official vote is cast.

Peace advocates around the globe are anxious to participate, and once Election Day formally clicks to an end, a total of 740 million voters from 50 different counties have selected the winner.

With spotlights blazing and countless news cameras poised to capture the moment, the winner is formally announced. However, unlike previous winners, this person suddenly becomes the most famous person in the world, more celebrated than any king, president, or prime minister on the planet.

While on the surface this may appear to be nothing more than an ingenious PR stunt for selecting prizewinners, it is indeed much more. Voting software that crosses country lines fall into the category of “catalytic innovations” with the potential of creating new global mandates. Here’s why.

Unlike “disruptive innovation” that disrupts an existing industry, “catalytic innovation” has the potential to spawn entirely new industries.

Any technology that becomes a catalyzing agent for opening doorways into a world never before seen, falls into the broad new category of Catalytic Innovation.

Electronic voting has long been touted as a more efficient way to conduct an election. But the technology will offer far more than just a new face to an old process.

Early forms of global elections are already in play with shows like American Idol and the Eurovision Song Competition. But moving past the music scene, in what situations do global elections become an appropriate tool for influencing the future?

Certainly there are many relatively harmless scenarios that could be envisioned:

There are also many ways that a global election could be overreaching, pushing past our present limits of acceptability. Here are a few examples global elections that would likely get censored out of or disallowed in many countries:

At the same time there are huge grey areas where the appropriateness of this kind of election is unknown.

Many of our national systems are becoming part of new global systems. As such, we could use global elections to determine the official policy for:

Many people have predicted we will someday enter an era of e-democracy where citizens can weigh in on far more issues than those that end up on a ballot. Since it circumvents the power of elected officials, e-democracy will likely only have limited application in the future.

But going beyond country borders, we circumvent far more than a few local power brokers.

In the context of a global elections, at what point will the results be large enough and representative enough to influence, even supersede, the authority of an industry group, individual country, or even a group of countries?

As an example, would the participation of 20 million people from 5 countries constitute a global mandate? Probably not.

If the results of an election were only separated by 1% of the vote, is that still too close to be considered a global mandate, or will it require some sort of “obvious will of the people” supermajority such as 60-70%?

At this point, there are far more questions than answers. But that will not stop people from using global elections to influence the world.

The Coming Battle of the Mega-Influencers

There are several people who have the ability to sway world opinion.

As an example, if a global election were being orchestrated by someone like Mark Zuckerberg, Jack Ma, Larry Page, Jimmy Wales, Mark Cuban, Reid Hoffman, Marrisa Mayer, or Peter Thiel, most of the whole world would take notice.

Companies like Facebook or Google, with over a billion users worldwide, may be the perfect platform for both promoting and conducting early elections for testing the limits, but these are not the only ones.

While the motivations behind a Facebook or Google-led election may seem completely altruistic on the surface, their behind-the-scenes plan may be to influence China, in a way forcing it to open its doors to tech companies or face being “left out” of key global decisions.

Any election with an obvious hidden agenda like that will be destined to fail.

So far we’ve only scratched the surface of how the Internet can be leveraged to influence the entire world. Pushing beyond the current playgrounds of photo sharing, online games, and social networks are apps with far reaching implications. Electronic voting is one of them.

But much like Peter Diamandis’ effort to catalyze global prize competitions, someone will emerge as a thought leader to pioneer a new global election industry.

Inside what may start out as a playful way to get more people involved in selecting the winner of the Nobel Peace Prize is something far more serious – methodologies for establishing new global mandates.

In best-case scenarios, global mandates will serve as everything from a temperature gauge for global opinion to a checks and balance system for over-reaching countries. They may also be used by people in first world countries to impose their will on the less fortunate.

Do global mandates pose a treat to our current way of life, or do they fortell better times ahead? This is a topic that everyone should have an opinion on, so please add your comments below. I’d love to hear what you’re thinking.