iTunes U – The Rise of the 800 Pound Guerrilla 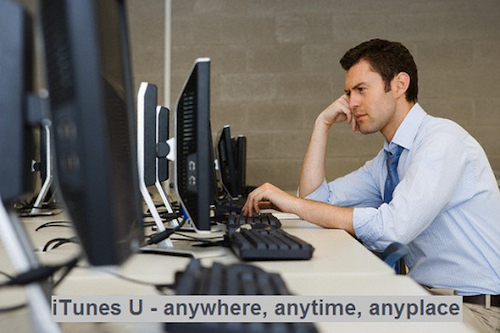 In April 2009 Stanford University announced that its iPhone Application Programming course had broken the 1 million download mark from the Apple iTunes site. And it did it in record time – less than seven weeks.

The course is nothing more than a series of classroom videos being taught by a team of Apple engineers. But the price was set at that very attractive price point of “free.” One catch though, only people who were enrolled at Stanford University received credits for the course.

With over 200,000 courses from over 200 different institutions to pick from on iTunes U, and all of them free to anyone who wants to take them, Apple is quickly becoming the world leader in courseware aggregation. The obvious question to ask is “what is Apple’s motivation for doing this?” and “how do they intend to make money?”

History of iTunes U

Shortly after Apple opened its iTunes Store in April 2003, the company started receiving requests from colleges to post courses on the site. Initially the requests were directed to the podcast section, but as the numbers grew, Apple devised a strategy for adding an entirely new division.

iTunes U was formally in May 2007. The service was created to manage, distribute, and control access to educational audio and video content for students within a college or university as well as the broader Internet.

In October 2008, Apple hired Dr. Joel Podolny, the Dean of Yale University’s School of Management, to run what was quickly becoming known as Apple University. This move, while very curious to most Apple observers, signaled a much farther reaching strategy than what most were anticipating.

While Apple is doing a good job of aggregating existing courses from existing institutions, they haven’t made any moves to open the floodgates, and we are talking serious floodgates here, to engage other potential courseware providers.

In our way of thinking, communications and search have been the two dominant forms of use for the Internet. However, the one application that could become far more dominant that either of those uses is education. What’s at stake is the creation of the largest and most influential site on the Web.

Apple has dabbled some in the courseware authoring arena with the Woolamaloo Automator, but it’s still a far cry from the fully integrated modality agnostic, language agnostic system that we see coming. You can see a more extensive look at the future of colleges and universities.

Colleges are on the verge of a significant transformation, and Apple is currently in the driver’s seat. But as we have seen so many times in the online world, new players can spring to life over night, and one that is positioning itself as one of the key players is a little startup in Denver called SatoriEDU.

Newspapers, travel agencies, yellow pages and record labels are all industries that have been greatly affected by the Internet, and each of them tell a different version of what may lie ahead for colleges.

The current system was designed for slower times and a different culture. In a world going through major upheavals in technology, culture, and lifestyle, our current college system has continually rearranged the deck chairs, but has shown virtually no ability to grasp the bigger picture. The next couple years will indeed be fascinating to watch, and for Apple, it’s currently theirs to lose.